Some of the best jobs come to us because of who we know, but that doesn't make entitlement a fair social policy. 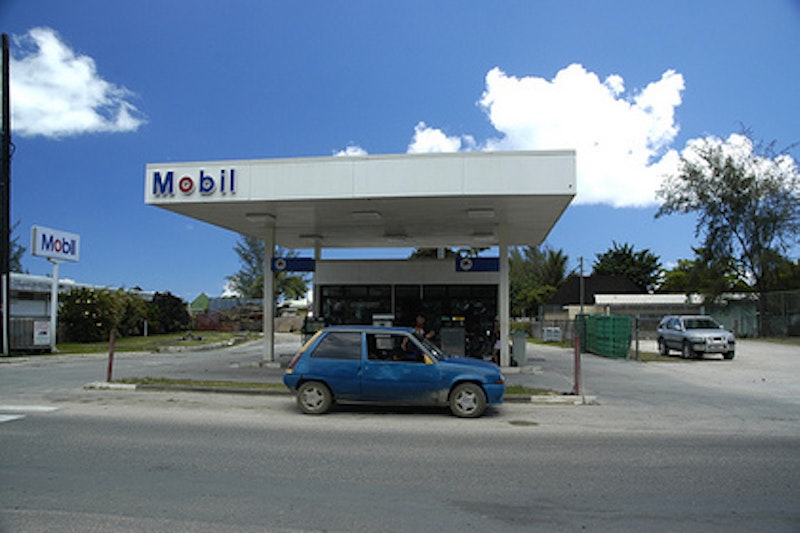 Skyrocketing gas prices have people really depressed. Waiting on line to purchase Gatorade and beef jerky at the local gas station, I hear the same hollow, hopeless tones when people tell the cashier, “Twenty on pump six, please.” No matter how high prices spike, however, there is something about that phrase that always brings a smile to my face.

The “$___ on pump ___” brings me back to my senior year in high school when $1.50 per gallon was steep, cigarettes were $1.50 cheaper, and I had the best job in town—a cashier at the nearby Mobil station. Everyone knew about our hook-up for free Domino’s pizza, an endless supply of free donuts and hot dogs, and the fact that coming to work in the morning literally meant hanging out with our best friends—who all worked there. We were tobacco barons; being our friend meant we’d sell you that pack of Camels or that tin of Skoal. We owned the town.

The first time I came in to apply for the job, the old manager Bill told me they weren’t hiring. A couple of friends promised to throw in a good word for me and told me to swing by a few weeks later. When I came back the next time, one of my friends was working. I asked for an application, and the same routine ensued. That is, until my friend spoke up and said, “No, no, this is the kid I told you about.” Bill looked at him, looked at me, smiled, and told me to come back the following day. I was hired.

Retelling stories from the Mobil last week, I came to an uncomfortable realization: without connections, I wouldn’t have even gotten a job working at a gas station. Having conversations with people about my current job search inevitably ends with someone saying, “It’s all who you know,” or, “It really is all about connections.” Okay, I get it.

Of Dutch origin, the last name Mekelburg means “Came from Mecklenburg, Germany.” Beyond that, it means little else. Mekelburg probably means nothing to you except maybe “He writes for that one website. Sometimes I like his stuff and sometimes I don’t.”

During a visit to Amsterdam a month ago, I looked up my family history in the hall of records. My great-great-great grandfather, it seems, was a sjouwer back in the old country. What in God’s name is a sjouwer, you ask? Well, the people at the hall of records couldn’t remember the English word for it, but they described it as a very poor-paying job where someone “carries stuff.” The English translation is “porter.” My forefather carried shit around for a living.

We Mekelburgs have done considerably better since arriving stateside 150 years ago. Amsterdam’s Jewish ghetto has been replaced by picturesque suburban lawns, and comfortable jobs. We are the American Dream materialized. Boots strapped, we marched skyward through the ranks to American upper-middle-class-dom.

I love that my last name carries no aristocratic weight, almost as much as I quietly hope that it means something for my children. Right now, it’s as though all of my accomplishments are mine. Being a Mekelburg didn’t get me into college, didn’t get me a job at the paper there, and didn’t get me this gig at Splice.

Then there are those connections that you make. These come from actually introducing yourself to people, impressing people, working hard or sometimes just dumb luck. These connections are usually merit-based, and I definitely have no problem with them. Yet, sometimes these are offshoots from that other type. Sometimes who you are puts you in the same room as someone or gives you education from right school because your parents went there.

The thing is, with such an emphasis on connections, it becomes harder and harder for people without them. Once someone reaches a certain social status, they can pass their networks down for generations, starting a new thread of success for their family. Each thread, though, takes up a space in the social fabric, enhancing a very strange form of indirect nepotism.

This is visible on the macro level, but also on the micro. My friend working for a prominent research institute says she’s the only intern without a family member on the staff. I may have gotten this job without connections but my last one? Well, a family friend recommended it to me and put in a good word. Even if I was immensely qualified for the job, it doesn’t matter. I worked there because of who I am—just like at the Mobil.

America’s foundation lays on the principle of a meritocracy. Skill, talent, hard work, and a little bit of luck can get anyone to the top. This remains true, but that last one—a little bit of luck—is slowly being replaced by knowing the right people. And sadly, knowing the right people is slowly overtaking the other three. Perfect resumes have become commonplace, making them easier to ignore. While connections used to be the extra nudge to get you ahead, they have become an almost immorally large push to success. (Fast-forward to 3:10 and watch number five (Reggie Bush) illegally push number 10 (Matt Leinart) to win the game.)


A good solution to this problem doesn’t exist, and it’s impossible to root out connections. The only thing I can offer up is a flawed idea, but it will help break down this system where undeserving people get into schools, get jobs, and go farther in life just because of the way they’re born.

It’s fairly simple: we create a system where not having connections actually helps you and having connections doesn’t necessarily help you. Finding out if each and every citizen has connections is a logistical impossibility, so we would have to create a profile of the type of person that lacks connection. This evens out the starting playing field and gives new people chances that they weren’t given based on their last name or where they grew up—or at least as much of a shot as someone with those connections. It may even bring a new type of mind and different background to the workplace, strengthening and diversifying American business, and giving incentive to be different and more creative.

We assume that people with connections will land on their feet based on their profile because statistically they do, and if their connections and talent are legit, then they’ll be successful system-be-damned. This is not fool-proof. Sometimes people without connections who aren’t as talented will get ahead of a more deserving person, not too dissimilar from the way connections make this happen now.

There will be casualties. Someone like me—with relatively minimal family connections but a background that would imply a lot—is the perfect type of casualty, and this system would definitely hurt me. In general, it also might rub a lot of people the wrong way—especially people with connections or people that fit the profile. It seems like it’s overriding the essence of meritocracy. Honestly, I can understand that feeling if you don’t accept that the challenges people face without connections have overridden our current essence of meritocracy. But they have and they do.