In which our colloquial columnist asks that meteorologists earn their money and considers the implications of the D.C. gun ruling. 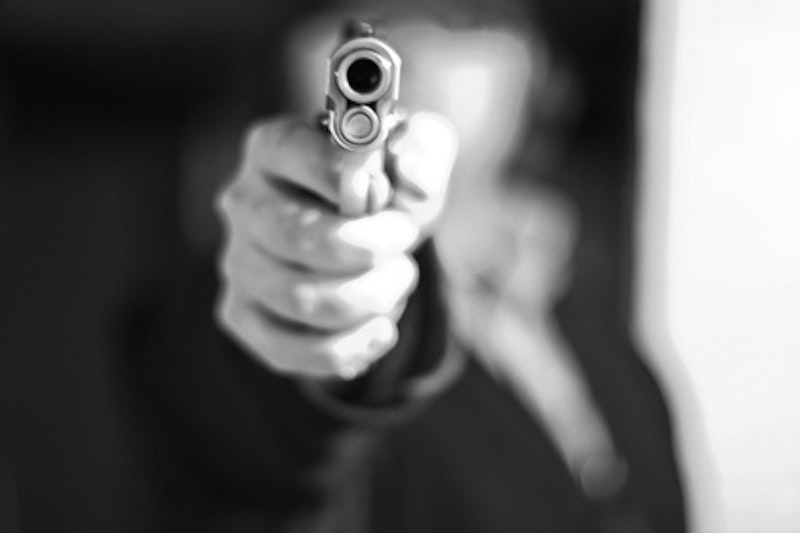 So it's Summer now and I've been pretty busy moving coolers fulla Legal Beverages around in the out-of-doors and not so much paying attention to the Current Events other than Your Local Five-Day Weather Forecast: "50% chance of afternoon thunderstorms."

?!?!?? The fuck kinda forecast is that? You get paid long dollars for being on teevee or whatever and saying it's Even Money it might rain later this afternoon? 50%? That's a fucking coin toss, jeez, we can all do that Every Goddamn Day, so look, all you Weather People, you all get your fucking info from the same place (the Sky) so why not take a chance, you know? Be individualistic (http://www.thefreedictionary.com/individualistic) or something. Make a rep for yourself, go out on a limb and actually Predict some shit, huh? I just wanna turn on the Teevee and some Live Local and Latebreaking, or Weather Channel action, or my Computer and see somebody go something like: "It's not gonna rain today," or "Hey, you know what? I'm not sure it's gonna rain, but all these other Cowards who do the Same Exact Job I do and get paid Obscene amounts of money are all calling it a goddamn 50-50 chance, so I'm gonna Go Big, Go Leader, and say something that is not expressed in a percentage. I'm gonna Predict, and if I blow it, then I gotta, I dunno, maybe do some Community Service or something like that, but I will be the Weather Forecaster Who Makes The Effing Call."

Man, I would so Tune In to that shit so fucking hard wherever it was, always and for reals. Show me the big satellite shot of The Earth, explain what's good, and then Make The Call. Make it. Be Somebody. And furthermore, be like "Yeah, it's gonna rain, and it's gonna rain right fucking Here, right on top of your baseball game, but not over Here, where you are enjoying a Picnic Lunch and an Insouciant Rosé, eh? I heard Rosé is coming back. Otherwise, seriously and weatherwise, I'm done with these Retail Weather Forecasts, man. No more fucking waffling, fuckers, or I'm just gonna go look at the Government Weather, and hey, like I said, not really feeling the pulse of Events, Currently, but I guess The Supreme Court Of The Government And We The People Of The United States Of America just made The Guns more Legal than ever in the District of Columbia, or maybe in a more legalistic and lawerly sense, made it illegal for Guns to be illegal in the D of C, and I know lotsa people are not really thrilled with Guns (especially in the DC where they have lotsa Crime and that DC Sniper shit), but the way everything's going these days I believe it is totally OK for Guns to not be against the law in Washington, The District, since Guns are pretty much legal everywhere else in This Great Land of Ours, yes?

And also because errbody in the DC sorta gets screwed just for living there, since it's not even a State of The Union, so they're Nobody-I mean, no offense to The People of The District, but what the fuck is all this shit about Securing the Borders if we got some of Our Own who don't get to live in a State of The Union? If you live in DC you don't get to be repped in the Senate by some Senators, which means you got no Federal juice, unless you are part of the Government, and then I guess maybe you just sorta don't care what goes on out there at Street Level since you are all in the Halls of Power and stuff and enjoying press conferences and making legislations or whatever? Why don't you legislate some fucking Government in the Seat of Government? I mean, I don't even understand why Senators and Congressors have to live in the District of Columbia now that there is The Internet and stuff. Like, where's the "Telecommuting" we are all supposed to be doing to Save Energy? It's like, right after they (and you know who They are, in DC) invented the Internet, alla sudden it was Telecommuting, but I guess not for the Government, just for The People? Hillary Clinton and Barack Obama have been Senatoring the whole time they have been running for President, right? Why does Clinton even gotta go back to DC, why doesn't she go to New York to Senate from there? She can Telecommute and save Jet Fuel! They all should, the whole Government.

Think about that shit and remember to vote your Senates and Congress outta office and back home where they should do something Constructive, and fuck it, let everybody who wants to stay in DC the way it is now do whatever the fuck they want, man, but until there's some Statehood going on, maybe Real People shouldn't even live there, just move the fuck out of that shit and Live in a Real State, but leave your guns in Dodge City.