After Roseanne, It’s Time to Reboot The Young Ones 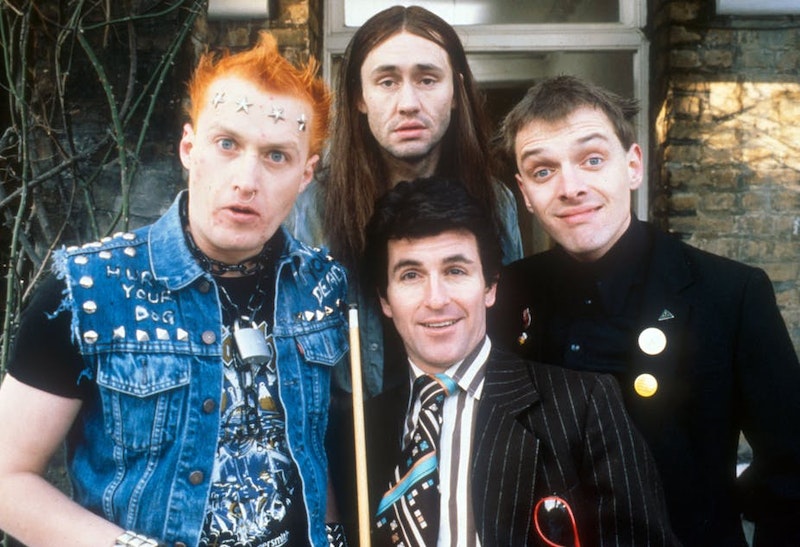 Hollywood executives looking to cash in on the success of the re-launch of Roseanne have a clear path to success. Reboot The Young Ones.

The Young Ones was a British sitcom broadcast in the UK from 1982 to 1984. Then it aired on MTV in 1985. The show was about four college students in London sharing a house, and each member of the cast presented a certain archetype. There was the anarchist punk rocker Vyvyan Basterd (Adrian Edmonson), the hippie Neil Whedon Watkins Pye (Nigel Planer), the cool business man Mike (Christopher Ryan) and, most memorably, the Marxist sociology student Rick, played by the great Rik Mayall. The show also featured musical acts.

The Young Ones had slapstick, surrealism, clever wordplay and a lot of politics. The politics were not like those of the new Roseanne, which features some mildly conservative one-liners but overall is pretty timid, with Roseanne Barr promising not to mention Trump by name.

The Young Ones had characters who were steeped in their ideology and intent on combating others about it. The show didn’t nibble around the edges of the culture wars; it allowed the characters to realistically portray the euphorically ideologically students that they were. The show’s creators and performers didn’t make an occasional joke about ideology and culture—they were at the center of the characters. In one episode the artsy socialist Rick finds out that the hippie Neil bought lentils that came from South Africa. “I’m not going to paying you money to eat black men!” Rick cries. “I can become a pig and do that for free!” In another the police are depicted as comically overbearing and violent, smashing up a small party as soon as Rick drops the needle on a Human League record.

In another episode, Rick, who’s often shown on the show reading Marx and enthusiastically calls everyone a “fascist” (including Margaret Thatcher), gets into a loud argument with working-class punk rocker Vyvyan about violence in comic books.

Rick: There’s not point in reading comics. They’re stupid… nothing but war in them. War, war, bloody war! Why can’t they have stories about love and peace?

Vyvyan: Because it’s sissy, you girlie.

Vyvyan: It is. It’s being soppy and very very girlie.

Rick: I am not being girlie! This entire discussion is completely sexist anyway and I don’t intend to continue it…. but, for your information, it is not soppy of me to wish for a world where a man will love his brother.

Rick: You’re deliberately trying to provoke me, aren’t you?

Rick: For one man to love another is not poofy, it’s actually very beautiful. It’s only when they start touching each other’s bottoms that it gets [laughter].

Vyvyan: I’m going to tell Mike and Neil that you said that you love men—

Rick: All I said was that this comic is a reactionary, militarist pamphlet! All they ever do is fight all the time!

Vyvyan: And what’s so wrong with that? I suppose they should go around touching each other’s bottoms! Dan Dare touches a Mekon’s bottom! Exciting new story! Batman gooses the Joker’s crack!

It’s good that 25 years later it’s not possible to use gay slurs like “poof” on a sitcom. And yet there’s a bracing freedom in The Young Ones, a freedom that the new Roseanne is only hinting at. Imagine a new Young Ones featuring a social justice warrior, a black power activist, a Trumper and a sci-fi nerd. The characters wouldn’t stop at the occasional mild zinger aimed at political leaders, but interact with each other in an ecosystem of near-total freedom of expression. The liberals could call Trump vile, stupid, fat and disgusting. The Make American Great Again business major could call feminists smelly, ugly and angry. They’d be portraying students, that time of life when extreme political ideologies come to the surface. And extremes can often be funny.

It’s possible that times have changed so much that something as creative, free and anarchic as The Young Ones is no longer possible. Or perhaps the Britishness of it wouldn’t translate to America, although The Office certainly did.