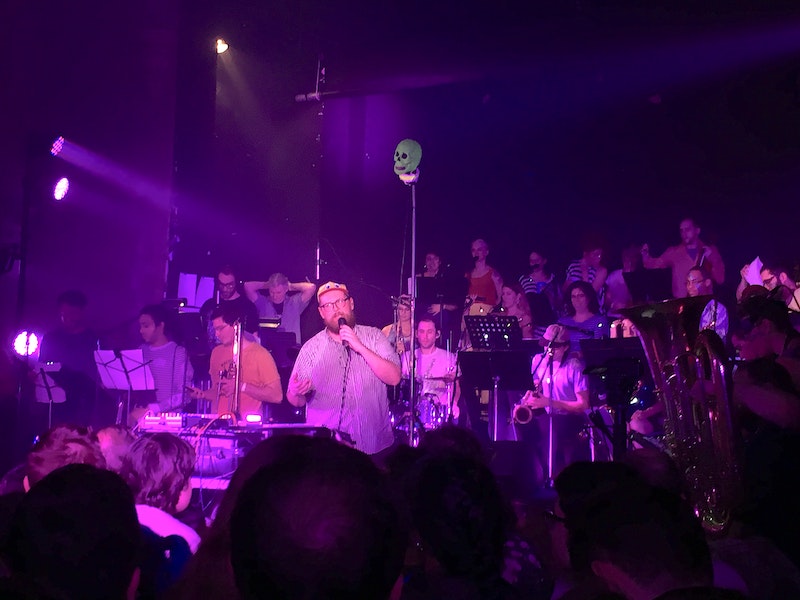 Dan Deacon—Spiderman of the Rings 10

I don’t usually dig anniversary shows or artists playing old albums in their entirety, but Dan Deacon’s Spiderman of the Rings show at Baltimore’s 2640 last Friday was an exception: when Deacon recorded, released, and toured behind that album in 2007, he was still playing by himself with a hodgepodge table of equipment and backing tracks playing from an iPod Mini taped to a plastic banana. So he never played my favorite songs from that album—“Big Milk” and “Pink Batman”—and he hadn’t played other songs like “Snake Mistakes” or “Trippy Green Skull” in many years, since I saw him at 2640 opening for Girl Talk in September 2007. At that show, Deacon mostly played material that would end up on Bromst in 2009, and when I saw him at a short-lived space in the Annex called The Nicolas Cage on September 11, 2009, he debuted an early version of the “USA” suite that would constitute the second side of his 2012 masterpiece America.

So he’s always been an artist ceaselessly moving forward, but I really enjoyed this one-night dip into the past, especially since he was backed by a 30-piece ensemble that elevated the pure computer compositions on Spiderman of the Rings. I was especially struck by Ultimate Reality, the piece that opened the show, and one I never got to see live. Ultimate Reality is an album-length composition for two drummers and Deacon’s synth, paired with psychedelic video manipulations of Arnold Schwarzenegger movies. Deacon stood by the side of the stage as his piece played through the PA and watched his drummers, Jeremy Hyman and Kevin O’Meara, play like Olympians. The look of bliss on O’Meara’s face as he was completely locked in about halfway through the performance was beautiful and inspiring. I know Spiderman of the Rings really well, and it was wonderful to hear “Big Milk” and “Pink Batman,” but for me Ultimate Reality was the revelation of the night.

Is there another sequel to a movie based on a book that’s superior to both? I was stunned and hypnotized by Blade Runner 2049, whose mise en scène conjures the bleak dystopias of Philip K. Dick’s work much more than the very dated 1982 original. I love Vangelis, but it’s a bit silly, you know? Besides a handful of details in the original Blade Runner (the pneumatic empathy machine, the sound design, the rotten neon light, and the abundance of debris and dust), I find it boring and wildly overrated. I’m a huge Philip K. Dick fan and Do Androids Dream of Electric Sheep? is a minor work of his, good for a few images—mood organs, electric animals, superimposition of identity—all of which are absent from Ridley Scott’s film. Blade Runner 2049, while narratively predictable, is a beautiful and haunting tone poem that captures the immense desolation and isolation and sadness that’s an essential part of Dick’s best work.

There’s so much silence in this movie, so much distance, a vast loneliness. I agree with Matt Zoller Seitz’s comparison to Apocalypse Now as another “film that was better directed and acted than written.” And there’s half a dozen wonderful Dickian images here, mostly with Ryan Gosling’s hologram girlfriend: grotesquely frozen in mid-kiss, the superimposition with a real blonde woman, the Lynchian glitches that interrupt romantic moments and conversation… and then the landscape of Los Angeles in 2049: an impenetrable atmosphere choked with smog and dust, far fewer people on the streets than the original Blade Runner, the gorgeous lighting and the recurring reflections of water, and then that last scene on a stone beach, shrouded in darkness and quiet. All that, along with a powerful and imposing score by Hans Zimmer and Benjamin Wallfisch, make Denis Villeneuve’s Blade Runner 2049 a surprisingly affecting, haunting work of vast sadness and waste that evokes Philip K. Dick’s work more vividly than any other adaptations of his novels.

“That was the culture then”

What a pathetic excuse for a man whose behavior never represented any culture at large. I’ve no doubt most men resented Harvey Weinstein’s mea culpa that cast blame on an entire generation. Chronic sexual assault and harassment was never “part of the culture” at large. The “casting couch” cliché is treated like a joke despite remaining true in so much of the entertainment industry. But Weinstein—and his improbable defenders Ross Douthat and Bret Stephens—are disingenuous, and self-serving when they drag everyone else down with them. Douthat and Stephens, ironically writing for The New York Times, the paper that destroyed Weinstein’s life a couple of weeks ago, defended his behavior and the line “that was the culture then.” Douthat asked us to "give the devil his due,” and Stephens insisted, “Hyenas cannot help their own nature.” Speak for yourselves, limp-wrists.

Douthat conflates the rise of pedophilia within the Catholic Church with the popularity of David Bowie and Led Zeppelin in the 1970s, a particularly stupid thought even by his standards. He casts the '70s as this uniquely depraved decade full of paranoia, drugs, rape, and abuse at all levels of society, especially in the entertainment industry. Oh, please! As if “rape-y rockstars” haven’t existed since the birth of the medium. He condemns the 1970s with statistics: “Never so many divorces, never so many abortions, a much higher rate of rape, an S.T.D. crisis that culminated in the AIDS epidemic.”

He neglects to make the connection between the decades that preceded the '70s and how all of those things are the opposite end of a pendulum: in the 1950s and early-1960s, divorce was still scandalous, sex was not up for discussion and or proper education, and as for rape and STD’s, we all know what happened at Altamont, and how the great “opening of the eye” in the psychedelic '60s led to a lot of layabouts and abandonment of responsibility and morality. Too many babies were thrown out with the bathwater, but Douthat forgets (or disagrees) that that was very, very rancid bathwater that needed to be tossed. Douthat and Stephens: stop trying to distract readers from Weinstein’s heinous crimes and cast blame on millions of people that did nothing wrong and never contributed to the toxic culture that predators like Weinstein, Cosby, and Sandusky thrived within.