New Netflix special, Too Real, is worth a chuckle. 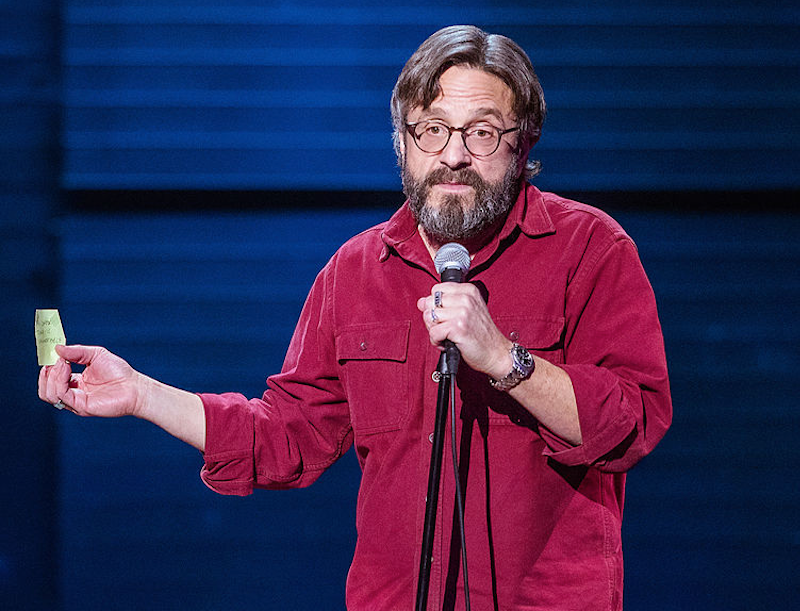 Marc Maron pictures a hipster couple discovering his body on the jogging trail. A heart attack got him and now he’s some flotsam that they can claim. Later in his routine another hipster comes along. This one discovers the funky, too ambitious, unwearable hat that Maron has finally discarded. Maron had seen a hipster wearing a hat like this and looking great. Now a hipster takes Maron’s abandoned hat and also looks great. Maron has gone through phases in his coming to terms with the hat: he’ll wear it just in the house, he’ll keep it on the wall as a decoration, he’ll stick it in the closet. For a while he thought he and the hat might work (he posed naked in it for his wife). But no. He gives up on it. And then that hipster comes along.

The hat is the ego, you dig? Maron’s hat bit narrates his life as that life seems to him: a prolonged, unquiet, and none too successful attempt at being. The routine is a highlight of his new Netflix special, Too Real. What’s too real here is the approach of death. Consider another highlight, Maron’s night out at a Stones concert. There’s “fucking parking,” and looking about he sees “a lot of reading glasses.” The Stones are like wrinkled wind-up dolls—he mimes them—doing what they’ve always done but now getting bent from age. Maron is conflicted about this. “Keith was doing a good job of being Keith at 70,” he says. As for Ronnie, “he’s the kid, he’s 68.” But Mick? There the difference between age and behavior really cuts. At first Maron flinches from the finger waggling and hip swiveling: “A man his age, I was embarrassed.” But then he turns around. He admires the gallantry, this defiance of time. He starts rooting for Mick. At a key moment (“Moonlight Mile,” Mick in a crop picker), he’s moved. He’s crying like “black-and-white photos of girls in the 60s,” a reference whose selection and phrasing must be admired. Then the moment breaks (close-up of Mick on Jumbotron, overload of wrinkles) and what hits Maron is fear. Mick might fall and his hip would be shot. Probably he’d live, but he’d be done. Then the message to Maron and his fellow oldies would be clear: “Mick is down. We’re dying.”

But Mick doesn’t fall, and Maron tears out of the stadium, roaring with life. He and his buddy decided to skip the encore (“Satisfaction”) and get to their car before everybody else. They do so, and they rocket along with the car playing Exile on Main St. It’s a reprieve, that’s all. He’s 53 and taking Gen X comedy from an obsession with midlife to an awareness of approaching death. What he finds is that everything has been worn down, and most of it wasn’t too robust to begin with. “Sometimes I don’t know the point of a relationship,” he says, and he reflects on his mother’s do-not-resuscitate instructions, which leave matters with his brother. “I’m not pissed off,” he says. “But I’m not no one. Why does he get to kill her?” Maron contemplates the blahness of creativity, as in the imaginary 1 Out of 9, an iPhone owner’s homemade documentary about failure and his dying cat. The decay of the political scene is remarked on: “Some things you never thought you’d say, like ‘Wow, these Nazis are annoying.’” A truth is voiced that only comes with age and resignation: “I believe that, if you’re a real Stones fan, some part of you just tolerates Mick Jagger.”

“There’s a lot of things I don’t understand, and I’m probably not going to,” Maron says.  And: “I don’t know how much time I’ve got left.” He says that many times; it’s the thread of the evening. He won’t cheer you up. But if you have to die, and you do, you might as well watch Maron’s new show.