A lesson about celebrity life on a Manhattan sidewalk. 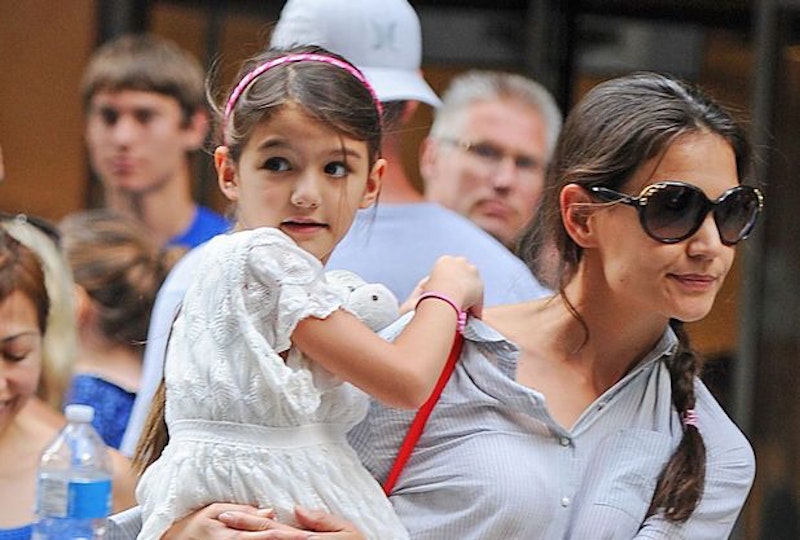 Mob scenes are fun in headlines, but see them on YouTube and they dwindle down fast. That business about the rodeo clown and the Obama mask—whether or not somebody was being racist, the crowd was making much less noise than one had been led to believe. Then there's the paparazzi that besieged Suri Cruise and called her a bitch: “Photog Calls Suri Cruise a 'Little Brat' Amid Paparazzi Swarm.”

The clip shows something else. Not a swarm but a clump, a bedraggled-looking clump. And not paparazzi either. There are two autograph hunters, a woman with a camera, a couple of girls holding up phones, and a gangling red-headed creature in a striped shirt. This last being moves slippily behind the main party before winding up next to the van into which Katie Holmes is bundling her daughter and another little girl. The redhead faces away from Katie and cranes an arm overhead, wrist angled sharply down, so the cell phone can catch something before the door closes.

Flashes are going off from somewhere, so maybe that's where the paparazzi are. If so, they're at a respectful distance. The people up close seem respectful too. “Hi, Katie, how's it going?” somebody calls as the party—star, daughter and other girl—emerge from a fancy hotel. Everyone falls in step with the big three, acting as if they were all out for a stroll together, one that involves a dozen people and starts with the hotel door and ends at the van.

Suri has a broad face like a shield, a handsome frowning face that recalls her dad. She wants the sidewalk stragglers out of her way. “We're trying to get to the car!” she says, exasperated. A man holds out a pen and (I think) an album cover, which he wants her to sign. “Go away!” she says, and they are past him. The man bends double to keep from jostling, not Suri, but the girl who's next to Suri.

As Katie hands the two girls into the van, the man gives voice. “So long, Suri,” he says. “You little brat.” He doesn't say it loudly. He's griping on the sidewalk, a loser who's been ploughed aside. A neighbor tells him to remember she's a little girl, and the man begins bickering with the neighbor. That's when “bitch” comes along. “She's bitch, little brat kid, man, little brat,” the man says, too muckle-mouthed for indefinite articles.

Suri Cruise has toned arms. There they are, cleft arms on a kid who's seven years old. She's already made from celebrity rope, the superior toned flesh that famous people wear. When we first see her in the clip, she's carried by the other little girl. That's in the hotel lobby; we catch sight of them through the glass door, Suri slung in the other girl's arms like a bride. She's being carried because, because… it's really hard to say. She doesn't have a foot or leg injury. Maybe the hotel's staff and visitors wanted to wave to her before she left.

News stories referred to the second girl, the carrier, as Suri's “friend.” Not likely. The girl's a yard taller and four or five years older, and she does things like carry Suri Cruise in her arms and stand between her and sidewalk loafers. Odds are she's an employee, a new variant on the giant bodyguards who get between wiry rock stars and the outside world. When you're a little girl who's important enough, you get a human accessory, a tall girl chosen for looks (you don't wear ugly clothing, so you don't wear ugly people) and her ability to stand wherever is most convenient for you.

The Suri “brat” incident isn't a paparazzi horror story, but it's still a downer. The skinny man who says “brat,” the girls with the cell phones, the red-headed, stork-like being that sways next to Katie Holmes' van and goggles up at his or her phone, trying to get in the same shot as the car. These are the beings that clump near Suri and her mother when it's time to drive someplace. Watching the scene is like watching a program where a few people get to be people and everyone else acts like they're turning into lint.

Fame watchers hate Tom Cruise. Most likely that's because, of all celebrities, he's the firmest believer in the celebrity creed: Focus on every little thing and every big thing and get them right and you can be one of the planet's wonderful people, one of the famous; and if you don't, then you were too weak to get it together and make the choice. The “brat” episode is depressing because it shows us Suri will never learn that her dad is wrong.