The whole thing bothers me. 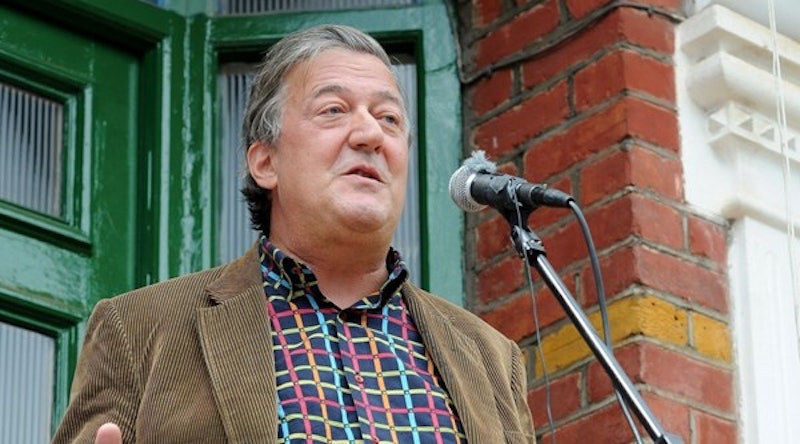 This is something I think the British are especially vulnerable to. Well, the British and me. It's a style of discourse in which the proper way of seeing is handed down, handed down casually, and you're supposed to know it's the proper way because of the speaker's understated verbal command. This style reaches a miniature peak with Stephen Fry's defense of a late friend who had idled away a decade in getting drunk and watching porn. The press greeted the man's death with regretful notices about how he might have done more with his talent. Fry went very wide in his response. It was so absurd, he reflected, this mania for totting up a life as if preparing a school report. Didn't live up to one's potential!

Good thing my young years didn't coincide with Stephen Fry. I would’ve been bowled right over by his pitch. My reasoning, unconscious, would’ve been this: many people are saying the same thing, each of them says the thing as if it were his or her own idea, and none of them has established why this thing should be true; therefore they are all confused and the thing is false. I would’ve decided that this idea they have, the totting up, it wasn't an idea smart people had. It was for the duffers, the banal, people who had the silly imitation thoughts there to be cleared away by people with the right sort of mind, people who didn't say dull things. That was how you knew who was right: they weren't dull, and you knew they weren't dull both because they made a point of showing you and because they didn't get worked up about it. I would’ve been curling my lip at the dull wannabes and their delusion—adding up a life.

Of course, Fry never says what's wrong with adding up a life. He just acts like the wrong fork has been used for salad, and we abide by his judgment because he shows an Olympian degree of personal swank. Fry takes us into his confidence, but he's still larger than we are. He's inflated with explainer's zeal and showman's presence. He's like a bulky young headmaster with a cupid's face, and his hands, shoulders and features wheel through a display of mannerisms meant to send reason sweetly home to its listeners' ears. I notice that he tucks himself forward from the waist, legs not moving but shoulders and mighty head bobbing at the viewer. I bet that's the headmaster again; I've seen the move in Monty Python sketches.

Fry is bluffing and lying all through his talk. His deceased friend, the great comedian Peter Cook, would’ve been better off for staying on his hind legs and functioning like a human. But Cook didn't manage that. Instead he rotted through his 40s and made a fool of himself. Fry pretends Cook was a centered free spirit who needed not Hollywood nor grand chateau; a whimsical man, he enjoyed the gift of his mind and the comfort of his friends, and to hell with the great world. But no, that wasn't the case. Cook longed for Hollywood success and failed to get it. He was desperate enough to play the starchy butler in a sitcom about Manhattan rich kids. “You just watch it, Jeeves,” said one of the girls, and that was the scene's big laugh. A few years later he was Joan Rivers' sidekick on a talk show. The show wasn't even American, which would’ve been the real big time. Joan's U.S. talk show had just flopped, and now she was getting her second chance, flopping in Great Britain. Cook flopped with her.

Now, if you're one of the funniest people in the country and you agree to be Joan Rivers' sidekick, either you don't care at all or you're really hard up. Cook cared at least somewhat; after all, he'd taken that sitcom part. So his time as Joan Rivers' number two was really just as embarrassing as it looked. Too bad, because Cook was gifted and had done great things when young, and even in mid-life he showed flashes. (On a talk show, Cook was asked what he did for his health. He said he practiced yoga, a very subtle and arcane type; if you didn't know what to look for, it seemed just like a middle-aged Englishman staying in bed until 1 p.m. every day.) Yet he spent mid-life teetering between desperate stab and prolonged soak-fest. Then he dried up a bit, and then he died.

Seeing a life go to seed makes anyone low, I would think—people who write obits or people who don't. But Stephen Fry wants to scare us off from assessing his friend, so he arches his eyebrows and puckers his lips at the idea of judging a life by its degree of activity and achievement. You can respect the loyalty, but what a lot of gilded bullshit to go with it. Worse, I don't think anyone called him on this nonsense. Everyone accepted it like they were all as dumb as me at 17. I don't know. I always wanted to write a Peter Cook routine, and here's the first line: “It's this sort of thing that makes me think the intellectual life is a big lie.”