He just doesn't get it. 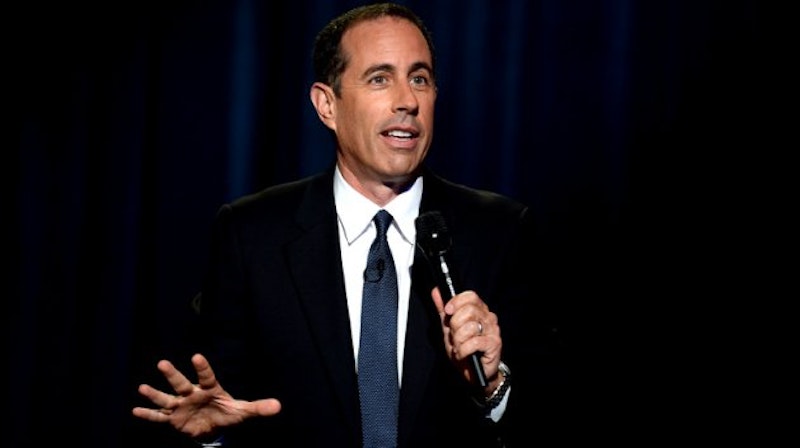 The "Political Correctness Wars," now a generation old, continue, and they're as pointless as ever. Most recently, veteran stand-up comedian and former sitcom star Jerry Seinfeld lashed out against the perceived hypersensitivity of young people in particular. While promoting the latest season of his series Comedians in Cars Getting Coffee, Seinfeld agreed with Colin Cowherd after the ESPN Radio host mentioned that such contemporaries as Chris Rock and Larry the Cable Guy refused to perform at college campuses. "I hear that all the time," he claimed. "I don't play colleges, but I hear a lot of people tell me, 'Don't go near colleges. They're so PC.' I'll give you an example: My daughter's 14. My wife says to her, 'Well, you know, in the next couple years, I think maybe you’re going to want to be hanging around the city more on the weekends, so you can see boys.' You know what my daughter says? She says, ‘That’s sexist.’ They just want to use these words: 'That’s racist;' 'That’s sexist;' 'That’s prejudice.' They don’t know what the fuck they’re talking about.”

In a mildly ironic turn of events, the word "fuck" was censored during the broadcast.

There are a number of issues the comedian's comments raise. Seinfeld has long prided himself on not using strong profanity during his act, and generally avoids any controversial material dealing with race, sexuality, gender or class differences. As an entertainer, he's under no obligation to write about anything he’d rather avoid, but then he’s stumbled into controversy nevertheless. When promoting his ultimately unsuccessful animated feature Bee Movie, Seinfeld made what he likely believed was a fairly benign joke involving the topic of rape. It was not benign, and many were shocked that such a "wholesome" comedian would make such a thoughtless attempt at humor, while promoting a children's movie, no less.

That's often the case when it comes to comedians who refuse to "work blue" or include anything about their political beliefs during their acts. Comedy doesn't have to be a socially progressive force, and largely hasn't been in decades, but when a performer is so committed to appealing to as large a demographic as possible, frequently it's because his or her own convictions are limp and half-formed. When they inevitably do slip up and "speak their mind,” those decades of willful ignorance come spilling forth.

The sitcom Seinfeld was far from a groundbreaking institution. The cast and writers were predominantly white and male, and social issues were typically kept at arm's length with that detached irony the 90s became notorious for. It was all good clean fun, because it could afford to be, aired during a decade when its racial and gender make-up was the norm on every other channel and every other time-slot. Jerry Seinfeld is only in his early 60s, but he's old enough to find himself at odds with those who are less than half his age. "College kids" are easy targets, but most of them weren't even born yet when the "PC wars" began.

The big joke is that "political correctness" was attacked for years before the media, academia, and the public sphere had to formally accept that there are appropriate and inappropriate ways to talk about human beings, especially those from historically marginalized communities. Maybe white male Baby Boomers should feel threatened: the world they helped to build is gradually being torn down and made into something better and more inclusive. It's not about anyone being too sensitive, or the "thought police" brainwashing everyone into being offended, it's about racist, sexist, classist, homophobic, and otherwise bigoted language that’s no longer welcome, whether in entertainment or day-to-day life. Seinfeld's 14-year-old daughter, reacting to a plainly sexist remark made by her mother, understands this more than her father. He can either bury his head in the sand or listen to what younger generations have to say, since the world's future is in their hands. He doesn't have to like it, but his ways of viewing society are no longer relevant.