Senior Drivers Take Over the Roads

I'm old! I got confused! 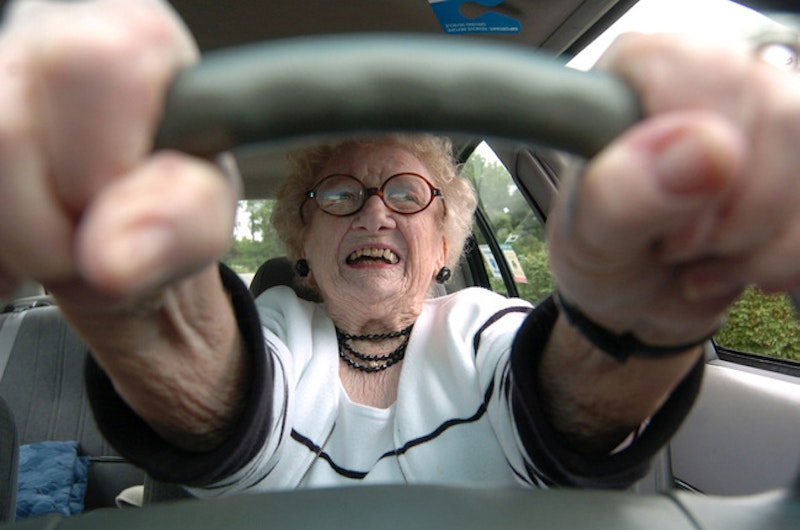 There’s nothing like hearing a hit-and-run on your car to catch your attention.

While chatting with my friend Martha at her house the other day, we heard a disturbing slam bang! Since my vehicle was the only one parked on that block, I knew I was screwed. We ran out to the road to discover my outside mirror shattered, mangled and hanging limply by bare wires. The perp also took out a squirrel. Catching a glimpse of a white Cadillac rounding the corner, a high-speed chase followed. In Starsky and Hutch mode, we violated most, if not all, the town traffic laws. The cowardly culprit finally parked. I marched up boldly. As the Caddy’s window slowly rolled down, I was greeted by the kindly face of Marguerite. “Yes, Dear?” she inquired. My envisioned sleazy criminal was, in fact, a 91-year-old clueless senior. I didn’t have the heart to call in a police report. Or inform her that she had flattened a victim. Luckily, seniors have plenty of car insurance. Despite the fact that she insisted her AAA card was her insurance card, the ordeal was pretty painless and I actually walked away feeling more remorse for Marguerite than I did for my car.

Ultimately, it did make me think about what sort of senior driver I would be. Despite the fact that I have a no points, almost 20/20 vision and gave up drinking and driving a long time ago, I can still be a bit of a blonde on the road. My father, who is 86, is still driving. No one wants to ride shotgun with him, not even the dog. Instead of driving too slow, as most seniors do, my dad subscribes to the theory that the less time in life you have, the faster you should get there. I used to lament about my teenage children driving, now I lament about my parents.

This comes as no surprise since, by 2020, there will be more than 40 million drivers age 65 and over on the roads. Fatality rates for drivers begin to climb after age 65, according to a recent study by Carnegie Mellon University in Pittsburgh and the AAA Foundation for Traffic Safety. From ages 75 to 84, the rate of about three deaths per 100 million miles driven is equal to the death rate of teenage drivers. For drivers 85 and older, the fatality rate skyrockets to nearly four times higher than that for teens.

The numbers are especially daunting at a time when the U.S. Census Bureau projects there will be 9.6 million people 85 and older by 2030, up 73 percent from 2007. Road safety consultants predict that by 2030, when all baby boomers are at least 65, they will be responsible for 25 percent of all fatal crashes. In 2005, only 11 percent of fatal crashes involved drivers that old.

States have tried to find solutions to this growing problem, but according to the Insurance Institute for Highway Safety (IIHS), which researches factors that cause crashes, state laws are inconsistent on the issue. Most state driver’s license laws require basic eye testing, but nothing is enacted to detect a driver’s physical ability or cognitive awareness. No state has an age limit on driving.

The only logical measure to lower the rate of fatal crashes involving elderly drivers is requiring seniors to appear at motor vehicle departments in person to update their licenses, says the IIHS, citing a study in the Journal of the American Medical Association. Most states do not require older drivers to renew licenses in person, and or require them to pass road tests, which can be crucial in pinpointing drivers whose physical and mental skills have diminished.

Seniors tend to stay on familiar roads close to home. Elinor Ginzier, a director at AARP, says the elderly find themselves “stuck at home” after giving up their keys and their freedom. They drive for as long as they can by going only where they have to as they age. This is a good choice. Most seniors make the decision to stop driving themselves. Over 600,000 elderly citizens age 70 and older decide to stop driving each year. Do I want to give up my freedom when I reach that point? My driveway alone is ½ mile long and there is no public transportation available here in the boonies where I reside.

Effective October 1, 2012, the Maryland Department of Transportation, decreed that the Maryland Vehicle Administration (MVA) will begin their conversion of drivers licenses by now extending their renewal every eight years. What will the ramifications of this be? Will I be meeting Marguerite again when she is 99?