Angry Nerds at the Point of Rebellion

Why simmering resentment in the hearts of dedicated dorks? 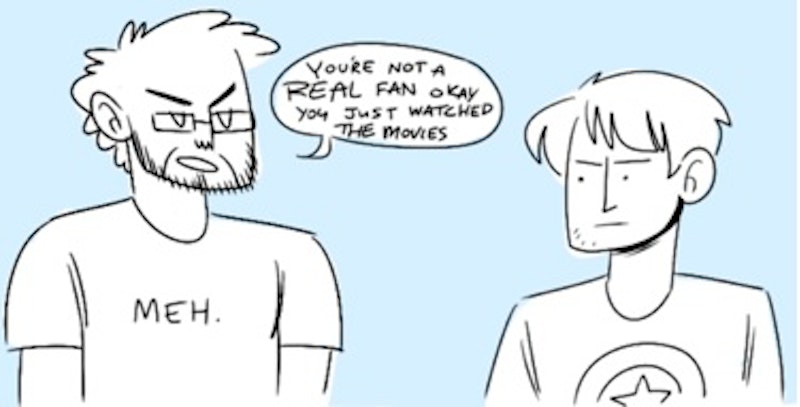 There’s a quiet sullenness that’s enveloped many formerly genial geeks. Superhero movies and TV shows like The Big Bang Theory have exploded in popularity, propelling “nerd chic” to the forefront of pop culture. It's far more common to see an X-Men shirt while out in public now than it was 10 years ago, and mainstream news sources run a constant stream of stories about the 180-degree shift in coolness.

So why is there simmering resentment in the hearts of dedicated dorks?

We've seen it time and again across almost every genre of music: an artist or band develops a hardcore following that becomes jaded and dismissive of other fans that come along after the band has gained mass appeal. More recent converts are assumed to be less dedicated, not “real fans.” They, in turn, quickly grow weary of the judgment heaped upon them by “snobs,” and a schism occurs, widens, and (occasionally) eats the fandom alive. Rachel Edidin and others have written on the Internet vitriol targeted at “fake geek girls,” but gender is not always the issue here. There's certainly more suspicion heaped upon new lady fans than dudes, given that comics and video games have been tantamount to woman-repellant in Western culture for decades. But the overarching suspicion is directed at everyone who hasn't spent their time in the trenches.

Any longtime comics fan will tell you that their formative years were chock-full of torments. School bullies, rejection from the opposite sex, and collection-destroying parents usually play a major role. To reach adulthood and see others join your hobby without dealing with the stigma you've lived with your whole life is demoralizing at best, and rage-inducing at worst. But this doesn't excuse elitism; if someone loves an entertainment medium, nobody has the right to deny that enjoyment. No matter what we've endured in the past, geeks should take the high road, thereby proving we were the better men and women all along.

The real problem, then, is the aforementioned fakery; the elusive poseur, dressed in all the right trappings to ensure they “pass” in their target demographic at first glance, but unable to correctly explain CBGB's acronym or name the founding members of the Justice League*—and, more importantly, uninterested in learning the answers unless they derive some nebulous social benefit from finding them out. These people are arguably detrimental to any subculture—they perturb actual fans, incite divisiveness, and can give new life to old stereotypes. The resulting challenge is to differentiate the legitimate enthusiast from the bandwagoneer.

Which brings me to The Big Bang Theory.

I’ve recently developed a physical aversion to hearing the word “Bazinga!” Some believe it’s a magic incantation that will create a nerd-bond between them and me. No way. The Big Bang Theory has brought the “nerds are cool” mantra to prime-time TV, but it only perpetuates the stereotype of the awkward, girl-obsessed loser with bad posture and worse complexion. Somewhere in the first 10 minutes of the pilot episode, there is this exchange:

Later, scientists Leonard and Sheldon are pantsed by Penny's burly ex-boyfriend. BBT is one long joke at the expense of geeks everywhere, which has somehow been embraced as a cultural unifier on par with The Cosby Show.

I'm glad to see an influx of new comics fans, no matter how they discovered the medium.** As John Scalzi wrote a few months back, “Any jerk can love a thing. It’s the sharing that makes geekdom awesome.” I love giving my friends new books by Alex Robinson. Everyone has to start somewhere; we are all newcomers to the fold at some point in our lives, and should be able to count on “real fans” to help us out in those trying times. But whenever something gets incredibly popular seemingly overnight, the old guard must be on the lookout for exploitation—because if you waited this long to be mainstream, the word “cool” shouldn't have an asterisk next to it.

** This emphatically includes The Avengers movie, because God damn but that was cool to watch.