What did a cartoonish character like former WWE superstar "Ravishing" Rick Rude have to say about masculinity? 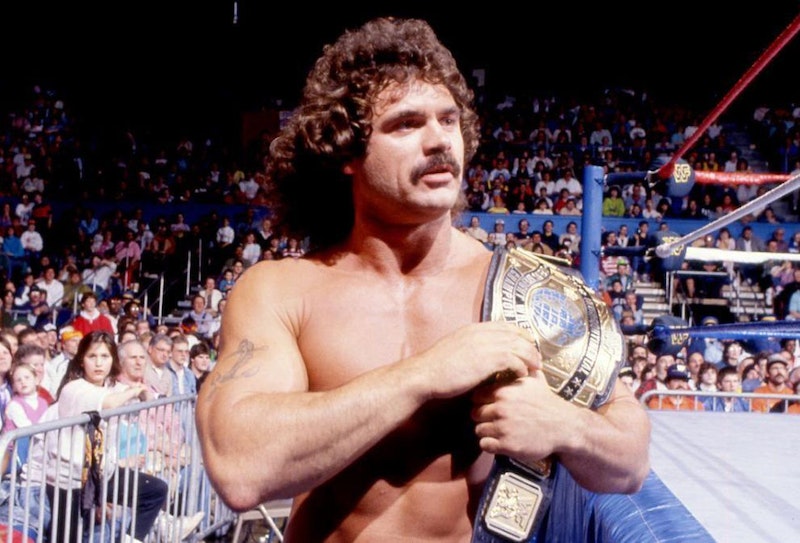 What I’m about to write has nothing to do with Richard Rood, the performer, and everything to do with “Ravishing” Rick Rude, the character he played in the WWF. Rood the performer died in 2009, which means his performances as Rude are fixed in amber. We can expect no subsequent appearances, no critical reappraisals, no sudden turns. He’s what he was: a monster heel who had the bad fortune of peaking in a cartoon superhero-fronted federation that never put the world “strap” on heels, monster or otherwise.

Like the Honky Tonk Man, the Macho Man, and the Million Dollar Man—but better than all of them, really—he generated heat, while carrying his hapless good-guy opponents through better matches than they had any right to perform. He wore the airbrushed likenesses of other women, and eventually himself, on his wrestling tights. He gyrated his hips. He insulted the “sweat hog” fans who’d paid to see him get his butt kicked. He kissed mom jeans-wearing women and caused them to swoon.

By the standards of 1980s-beefcake grapplers, Rude was an excellent athlete. His matches against the clumsy, ill-trained Ultimate Warrior were somehow not terrible. His later WCW matches against Sting and Ric Flair are borderline four-star classics. He could work the mic, work his gimmick—do it all, really.

But like fellow Minnesota native and “perfect” competitor Curt Hennig, Rude never succeeded in putting all the pieces together and supplanting the less talented megastars of the era, the Hulk Hogans and Ultimate Warriors who headlined the sport at its technicolor peak. Injuries constituted a big part of the problem in Hennig’s case, and while Rude took more than his share of bad bumps, I think it also went deeper: the Ravishing One rose to fame playing a designated hitter, and how could a designated hitter ever really win anything?

Before I reach that point, watch this video. I suppose it’s classifiable as “NSFW” if you’re in one of those workplaces where viewing homoerotic striptease acts happens to be against company policy, but why on earth would you want to answer to such heartless paymasters?

At any rate, the video gives you a good sense of Rude’s in-ring persona. Although others have expatiated on the implications of his act vis-à-vis gender and sexuality, I’m not interested in taking that discussion any further. Instead, focus on how joylessly he goes about his paces. He’s hip-gyrating and kiss-stealing about as enthusiastically as beaten-down Ralph Wolf punched the clock at the end of another long workday spent getting his butt kicked by the invincible Sam Sheepdog.

In spite of his prodigious heat-getting abilities, Rick Rude wasn’t a threat to any of the men in the audience. Kissing the wives and girlfriends of the “sweat hogs” he detested was a chore. Showcasing his washboard abdominals was an obligation. And the “real” women he lusted after in storylines—insofar as he lusted after anyone, since he seemed to be more interested in proving Lacan’s point about desire being a desire for recognition from the “Other”—wanted nothing to do with him. Cheryl Roberts, wife of soft-bodied ring strategist Jake “The Snake” Roberts, did everything short of puking up her guts to express his distaste for Rude’s crude come-on lines.

Rude-as-designated-hitter was a sort of “ideal man,” but also kind of an unthreatening nobody. The audience didn’t so much boo him as serve as a mirror for his own insecurities. Women might enjoy copping feels along his obliques, but to what end? None of them wanted to go home with him. Rude was “ideal” to the point of absurdity, and from this absurd condition arose selfish indignation: when would he ever be good enough to be worshipped like the demigod he had supposedly become?

When I was a kid, I thought Dusty Rhodes was the best wrestler in the world. He was my cynosure; everything else was secondary to whatever kind of nonsense feuding and interviewing he happened to be engaged in. I began watching WWF programming again in earnest because he’d signed with Vince McMahon’s company, after which he would spend the better part of his six-month run wearing polka dot tank tops and shaking his booty alongside his valet Sapphire.

But Rude soon proved to be the guy I found myself relating to, for reasons that I then saw through a glass darkly. Say wha? You’re telling me you related to this dude, who was playing a misogynistic, egotistical piece of garbage? Broham, u out ur mind? Dude rly, u even lift bro?

No, that’s not it. I didn’t relate to the substance of Rick Rude’s performance. How could anybody relate to the substance of anything that was on display in McMahon’s WWF of the late-1980s and early-'90s? Save for a handful of Ultimate Warrior interviews that mirrored my father’s insane tirades far too closely for me to take any comfort in them, it was mostly a lot of stupid crap aimed at stupid kids, performed stupidly, and lacking even the patina of redeeming postmodern subversiveness that it would develop during the “Attitude Era.”

But Rude—Rude was a sad bunny rabbit. Here was this wonderful specimen, this steroid-made creation, and he couldn’t catch a break. He wanted so badly for everyone to recognize his greatness. His hatred was an outgrowth of this lack of recognition, recognition that would never be forthcoming because, ye gods, what could be more loathsome than giving credit to someone who actually craves it? Screw you, meathead!

It was only years later, after I’d undertaken a regimen of self-improvement in order to slough off the bitter memories of this period, that I understood precisely how this fictional character felt. I knew what dark forces ravaged the soul of “Ravishing” Rick Rude. I had gone to ludicrous lengths to impress other people… because I just wanted, for once in my godforsaken life, to be impressed by myself.

Such an imperfectly perfect fate: after years of practice, you’ll be lucky if you become the man of your own dreams. When you’re a designated hitter—the man who has everything except something to offer—it’s the utter pits. The Cheryl Robertses, those people whose attention you crave because they’ll validate something about yourself, are repulsed by that excessive persona you’re always toting around with you. Like Rick Rude, you’re always trumpeting your mad skills to the world… yet who the heck cares? Your flaws are only made more manifest because of your assiduous efforts to conceal them.

You know that one real jacked guy who wasn’t the love of your life but you kinda sorta didn’t hate dating him only he wasn’t really all that memorable and now every few years you look him up on the ol’ Facebook to see what he’s doing and it turns out he’s doing okay or even better than okay and you wonder if maybe it could’ve worked out better than it did before finally concluding que sera sera and getting back to whatever hot new iPhone app or YouTube vlog is occupying your time? Well, the late “Ravishing” Rick Rude used to play one of those guys on TV.