Reflections on the career of Pacific Northwest Wrestling’s most unorthodox grappler. 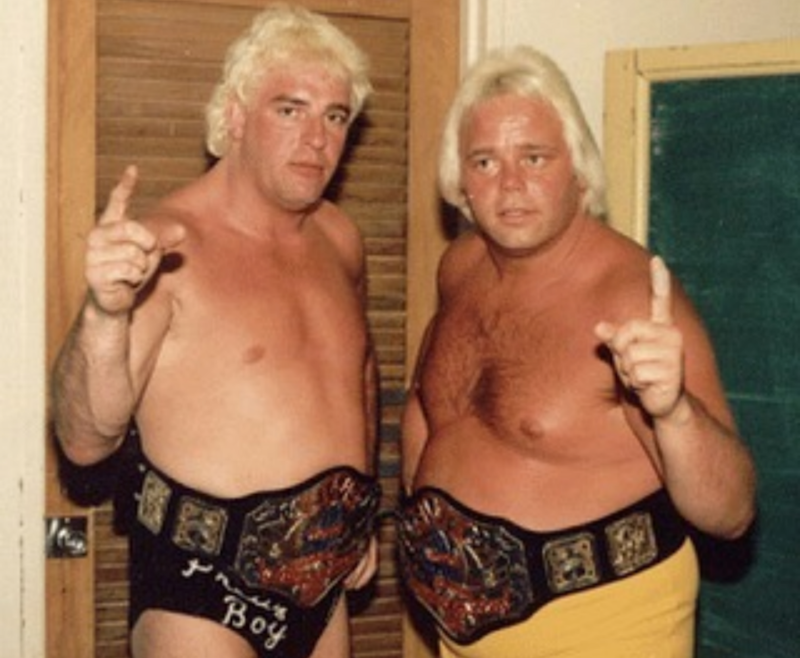 I sing of arms and the 217-pound man, “Playboy” Buddy Rose. The roly-poly Rose is best known for his work in Don Owen's Pacific Northwest Wrestling promotion, where he "put over" Roddy Piper in a bloody and exciting feud, thereby launching the career of a man whose professional activities ran the gamut from kicking Cyndi Lauper in the head to chewing bubblegum and kicking ass (except he's all out of bubblegum) in They Live.

But when I was a living-inside-my-own-head pre-teen, I didn't know any of this. Heck, I wasn't even aware that Rose wrestled under a mask at the first Wrestlemania, losing to Tito Santana. I did, however, come to appreciate Buddy Rose when he was an enhancement talent gracing the bottom of the WWF roster in the early-1990s.

And back then, the big thing I knew about Buddy Rose was... losing weight is a breeze!

Before we go any further, watch that promo. Vince McMahon was fond of giving temporary sinecures to veteran grapplers who'd served him faithfully in their younger years… and equally fond of humiliating them after he did so. Rose, meanwhile, had spent the latter half of his career mock-boasting about his own beauty and fitness while growing ever heavier (yet still remaining able to do one-armed push-ups with better form than Stallone in those overwrought Rocky training montages).

Here's the thing about most of McMahon's attempts at humor: they're ham-handed at best and repulsive at worst. Remember when all of those mid-card wrestlers kissed his ass as part of the “kiss my ass” club?  Remember when Triple H had sex with a corpse in a dream sequence?  Remember when strongman Mark Henry a) received oral sex from a trans person and then vomited in the toilet after learning that person was trans, b) admitted to having an incestuous relationship with his sister, and then c) was said to been intimate with ancient female wrestler Mae Young, resulting in her giving birth to a hand? Exactly.

But perhaps because this was the perfect fusion of one steroid-abusing alpha male CEO’s contempt for fat people and one self-confident fat man's willingness to deprecate every aspect of himself, the "Blow-Away Diet" promo is a triumph. The sketch deserves to have 50,000,000 views on YouTube and DailyMotion. It ought to be flagged for a copyright violation every two-three seconds.

The conceit is simple enough: Buddy Rose is presented as an overweight piece of human garbage who endorses a powder-based diet that doesn't actually result in him losing any weight. Over the course of the video, Rose minces around like a 1980s aerobics queen and consumes gigantic meals while an over-eager infomercial host shouts about the wrestler’s impressive body transformation. It's 90 seconds of comedy gold, in principal part because Rose's curious physique with its sensual, earth mother-y folds of tanned adipose, causes the segment to transcend the limitations of its trash-culture origin.

Now watch this 1990 “Superstars of Wrestling” match, all three minutes of it. The rematch, in this case—Wrestlemania I rivals Tito Santana and Buddy Rose square off once more. There's no mention of that first match, of course, because actual history didn't mean a darn thing to the WWF and the silly self-contained kayfabe universe in which it used to operate. Instead, we’re treated to some divine buffoonery on the part of Buddy Rose, who’s somehow still able to draw heat despite resembling a sassy, heavyset grandma.

First, there's his great silk-screened shirt ("I Worked Hard for This Body"), for which I'd sell a kidney should an "original" in mint condition ever appear on eBay. Then there's Tito Santana, who gallops to the ring at the 45-second mark, every bit the faceless babyface good guy he’d been throughout his career. Aside from the stupid "El Matador" gimmick he was saddled with later in the decade, Santana was the best kind of mid-carder: an athletically gifted blank slate onto whom his heel opponents could paint the match of their dreams.

After the initial tie-up, Rose performs all the basic bad guy psyche-out maneuvers with veteran precision. He taps Santana's chest and then backs away. He again ties up with Santana before begging off, after which the two men work a headlock into a series of other moves that serve to showcase Rose's surprising agility. Rose then terminates that sequence with a fancy bit of rope-related legerdemain, during which time Vince McMahon (acting as the good-guy announcer to Jesse Ventura's "heel" color commentator) makes a joke about Rose reportedly having made plans to get a tummy tuck. "Where's he gonna get that?" asks Ventura. "Tijuana, Chico's [Tito Santana's] hometown? You can get anything else you want down there." Ah, such enlightened banter. On with the show.

By the standards of crummy early-1990 WWF Superstars squash matches, this was a 60-minute Broadway. When Rose ascends the ropes at 2:30, only to be hurled to mat by Santana, you know you're watching something special. The resulting pin at 2:45 is too much too soon, particularly when you realize that you've just watched a great artist in his last days. Compare Rose's work in this match to Pat Patterson's against Sgt. Slaughter, and you'd be hard-pressed to point to one or the other as the superior wrestler. Even at this stage of decrepitude, Rose can still "make the match" against an essentially one-note good-guy character like Santana.

“So what?” you may be asking. Well, “you,” that so what is monumentally important—at least where I'm concerned. I happened to witness Rose's decline at the same time my father was spiralling downward. Both of them were in the process of becoming shells of the fascinating performers they once were. Both flashed hints of the talent that was slipping away from them. Both went from one humiliating "job-as-favor" to another, until there were no old cronies left to employ them and no young men who cared about the now-useless skills they'd spent a lifetime honing.

Buddy Rose was a realistic fake bad guy who thrived in an era when such qualities as the ability to sell an opponent's moves in a believable way actually mattered. My father was a slap-on-the-back schemer, a failed-athlete "man's man," and a quasi-criminal from a rural West Virginia community in which all those behaviors could be passed off as emblematic of an entrepreneurial spirit. By the time Y2K hit, nobody was buying what either man still had to sell. And by the time I got around to writing this in 2018, both of them were long dead, bless their heart attacks, yet they’ll live on in my heart forever.