Bill Burr’s Latest Is His Best

The comedian outdoes himself in his new Netflix special. 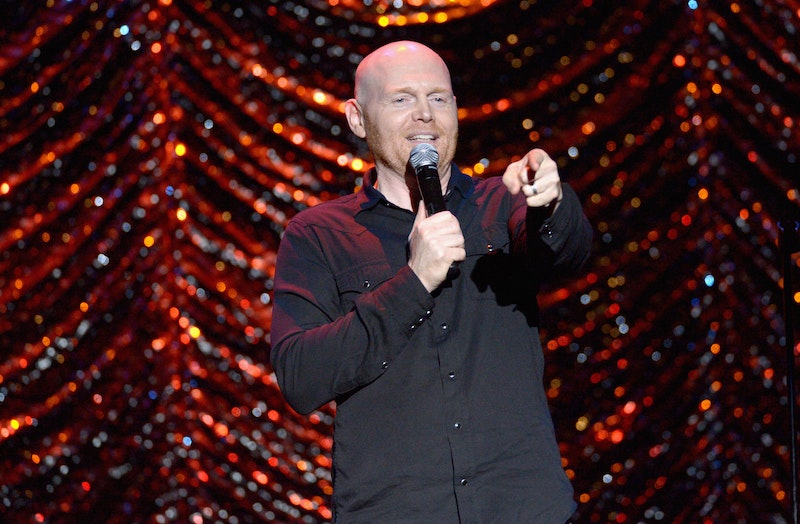 Out of nowhere Bill Burr does a great walk. Pushing 50, he’s developed a new gear and shows it off in Walk Your Way Out, his latest special on Netflix. The title may or may not be a coincidence. At any rate, the special’s set-piece is an extended chain of bits that starts with TV watching in bed and ends with a death in the jungle to save human civilization. The highlight of this set-piece shows us a gorilla learning to walk like a man. Burr does all phases: the gorilla’s original walk, the tough first day of trying to walk human, and then an elapsed-time transformation as each step becomes more like a person’s and less like an ape’s. That’s not all. Much of the set-piece is tied together by Burr’s performance of a made-up sign language (for conversations between ape and human). The signing’s played for laughs, naturally, and tends toward the obscene. But Burr does the signing in a brisk, economical way that punches the meaning home without undue stress. Altogether, the gorilla sketch amounts to a tour-de-force exhibition of how a comic can use movement.

Walk Your Way Out is an hour and 17 minutes of Bill Burr, which is about 20 minutes longer than the usual Netflix special about a comedian. Burr’s spreading himself lavishly here and he does it very well. His extended bit on McDonald’s—it touches on the culture of whining fatties, plus Burr’s happy memories of drunk driving—amounts to a quintessence of Burrism. There’s his perfervid view of existence (it’s combat) and of modern life (the triumph of the weak and their self-indulgence). There’s his self-portrait as a stubborn and dopey life force that can’t be restrained (drunk Burr must get to his car, no matter what anyone else says). There’s the suggestion that Burr, even while yowling and stamping out his opinions, is all wrong. In this case, he’s complaining about McDonald’s giving into modern-day softening influences by serving wraps and all-day breakfasts, not just burgers. He climaxes his complaint by recalling how good it was as a drunk driver to pull into the old-style McDonald’s for a hamburger.

The moralistic drunk driver sounds a lot like the angry white man who complains about “snowflakes” because his feelings aren’t being tended properly. Burr’s an angry white man coming to terms with blacks and women, a process that extends through Walk and its three predecessors on Netflix. He knows his anger has got him twisted up; he’s trying to beat it. He knows that blacks have their point of view, just like he does (and in Walk their view pretty much becomes his, as he goes anti-racist in a straight-ahead, non-tricky manner). He knows that women… well, he still has problems with women. Of course, Burr has trouble being alive. His head’s a container with nitroglycerine sloshing from side to side. The wrong arrangement of thoughts could make the sucker go up. But the right arrangement seems so wimpy.

Meanwhile, he suffers and sees no way out. Suicide pops up in Burr specials, and in Walk it surges up. He recounts a dream about suicide, demonstrating that anger is his response to fear (he wants to go back to sleep so he can yell at the little girl’s ghost that told him he was going to kill himself), and that a life hemmed in by anger and fear doesn’t become bearable simply because of awareness. The gorilla bit, or series of bits, explores awareness and its shortcomings. A gorilla learns sign language and we learn that it has an awareness of mortality and loss. Burr imagines freeing the gorilla and training it to pass as human so it can get back to the jungle. Mission accomplished, he then worries that the gorilla will teach the others to communicate; the world could end up like Planet of the Apes. Burr hunts down his old friend to shoot him. “Why?” the ape signs as Burr pulls the trigger. “Because Jesus wanted it that way!” Burr says. But he can’t do it. Instead, somehow, he gets hit by his own bullet.

Lying there on stage, Burr confesses his bit has no punchline. Originally he’d say “Jesus wanted it that way” and shoot the gorilla. But that bombed everywhere but Dallas. Now he’s stuck. He knows Jesus doesn’t particularly want things Burr’s way. He knows the world isn’t his and he doesn’t know what comes next. In the meantime, he’s added greatly to his strengths as a comedian while remaining very much himself. Walk Your Way Out shows that even a despairing, self-hating rage addict can build something fine, and do it as his world’s mental boundaries collapse. Let him be the inspiration so many white males need in these difficult times. And let’s hope he finds an ending that doesn’t involve the white guy or the Other getting killed.