A chatterbox conversation in Baltimore with two longtime friends, no politics allowed. 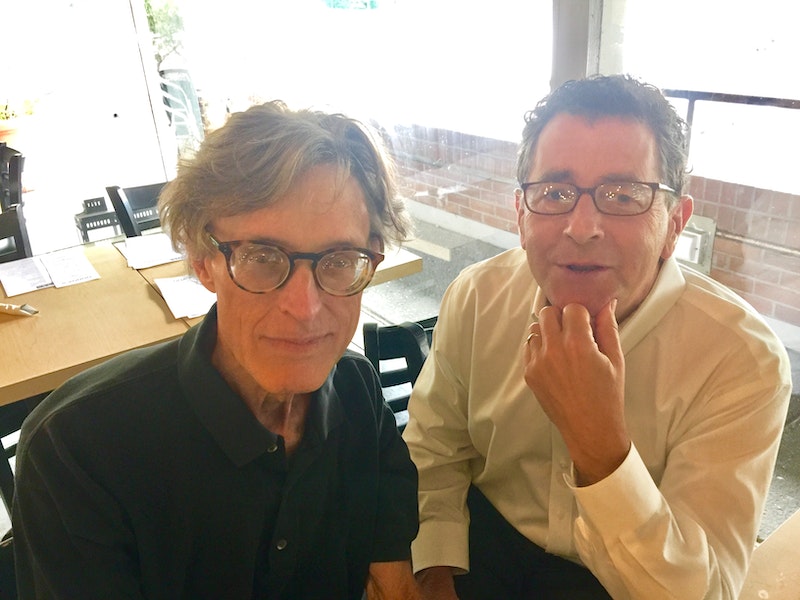 It’s not that often I see longtime friends in Baltimore, owing, I’d guess, to conflicting schedules and my quasi-hermit lifestyle, which becomes more pronounced as the years roll by. Last Friday, however, I spent two chatterbox hours with Michael Yockel and Alan Hirsch (my partner for 10 years at City Paper) at the latter’s Donna’s in Cross Keys. After we dispensed with our current ailments (and frankly, what gathering of men and women over 60 doesn’t follow suit), catch-ups on our children and spouses, the violence in Baltimore—the mind might be playing tricks, but it does seem worse than a generation ago, as murders are as much a part of the landscape at the helicopters that fly overhead our houses at all hours—and a mutual distaste for the Whole Foods “experience” (as Alan said, “I walk in and there’re no Utz products, as if I want to spend 10 bucks on a bag of organic, gluten-free chips), we moved on to other topics.

(The pic above shows Yoke and Alan.)

Mercifully, there wasn’t a single word spoken about current events or politics—while the three of us agree on some issues, vary on others, we were smart enough not to ruin a rare occasion by inadvertently sending up a contentious smoke signal. In fact, we talked a lot about books, and all agreed that either reading in print or audiotape in the car—that let me out, since I don’t drive, although my wife Melissa regularly visits local libraries for esoteric titles) is a balm—maybe like a Turkish bath—from all the garbage that passes as media today.

Inevitably, we waded in the nostalgia pool, which isn’t so strange since the three of us spent so much time together at 2612 N. Charles St.—as well as the Mt. Royal Tavern, Club Charles and Federal Hill bars or music venues—in the 1980s.

A week ago my son Nicky wrote a story for our website Splice Today about death pools, and how he won $40—an Old Hickory each from one of his buddies and me—correctly predicting that St. John McCain would croak before September 1. In fact, just hours after the alleged maverick slipped away to the arms of angels who comfort Beltway hacks, Nicky tweeted about his winnings, thanking McCain for the decency to make him some dough. I thought that was a touch gauche, but as he reminded me, “Right, dad, like you didn’t stretch the boundaries of taste at my age [25].” Right as rain, I quickly acknowledged, and felt a little silly even for the mildest of rebukes. As Bob Dylan sang in “If You See Her, Say Hello” (a so-so song on the overrated Blood on the Tracks), “Either I’m too sensitive or else I’m getting soft.”

Anyways, Nick’s story reminded me of a Yoke-penned cover story for CP in the early-1980s, headlined “Celebrity Death Stakes.” When I queried Michael on the subject—I’d mistakenly thought it was an irregular feature, rather than a one-off—he later emailed me about it:

“Inspired by the 17th-century concept of the tontine, the Celebrity Death Stakes worked as a kind of reverse tontine, whereby a finite number participants—10 or 12—each choose the celeb that he or she believes will be the next to kick off. To start, each player puts up a certain prescribed ante, which constitutes the pot, and then each picks his or her celeb—could be a statesman, film or pop star, esteemed scientist (Stephen Hawking), notorious criminal (John Gotti), etc.

“In the one I ran, people close to the paper (you, Phyllis [Orrick], Miss Pam [the late Pamela Purdy] and [Ken] Sokolow) participated. Someone chose Diana Ross (bold, since she was relatively young at the time), another chose film director John Boorman, and one went with Lady Bird Johnson. I forget the others.”

Pretty good recollection, and better than mine, since I think I picked Yoko (out of pure spite for her role in breaking up the Beatles), but might’ve gone former House Speaker, and weasel, Carl Albert. The story elicited a mixed reaction: hard-core CP readers loved it; those who picked up the paper almost solely for classifieds and personal ads were less pleased. Like any weekly newspaper with gumption, we regularly cheesed off this or that constituency. One time, we ran an item in RUMP—an anonymous gossip column written mainly by Yoke, Phyllis and myself—and a forerunner to my own MUGGER column in New York Press several years later—that poked fun… well, malicious fun, at the Maryland Writer’s Council. A representative of that organization—and it should be noted that the paper regularly printed poetry, short stories and columns by people in the MWC, like Andrei Codrescu, Rodger Kamenetz, Moira Crone, Bob Waldman, Anselm Hollo and current Splice Today contributor Tommy DiVenti—called Alan, (advertiser director) expressing her strong dissent and insistence on an apology. Alan tried to slough it off as a tidbit that’d disappear in a week, but she was having none of that: “Alan, you have no idea of the freight RUMP carries in this town.”

Naturally, that tickled me—at the time the paper was not quite on the verge of financial success, still a hand-to-mouth operation—but Alan wasn’t quite as amused, correctly informing me that he’d be one handling the fallout. RUMP never apologized, but I think Alan comped the Writer’s Council a small ad, and though friction remained, the matter was settled.

Probably worse, two years later, was when we ran a story about a new gay bar, The Port Hole (which took over Brooks Robinson’s Gorsuch House in Waverly), and while the article was fairly anodyne and supportive, the accompanying graphic pictures by Jennifer Bishop—cocks, erect, flaccid and huge from pin-ups at the establishment—caused major headaches for our growing advertising staff. (Alan had thrown up his hands at that point, tired of resolving squabbles.) One young salesman, a devout Christian, and usually mild-mannered, cornered me at the never-cleaned coffee machine, and ripped into my choice of content, saying his job that day would be very difficult. I don’t recall if the fellow lasted long at the paper—advertising reps came and went through a revolving door—but I did respect his balls, so to speak, upbraiding one of his bosses.