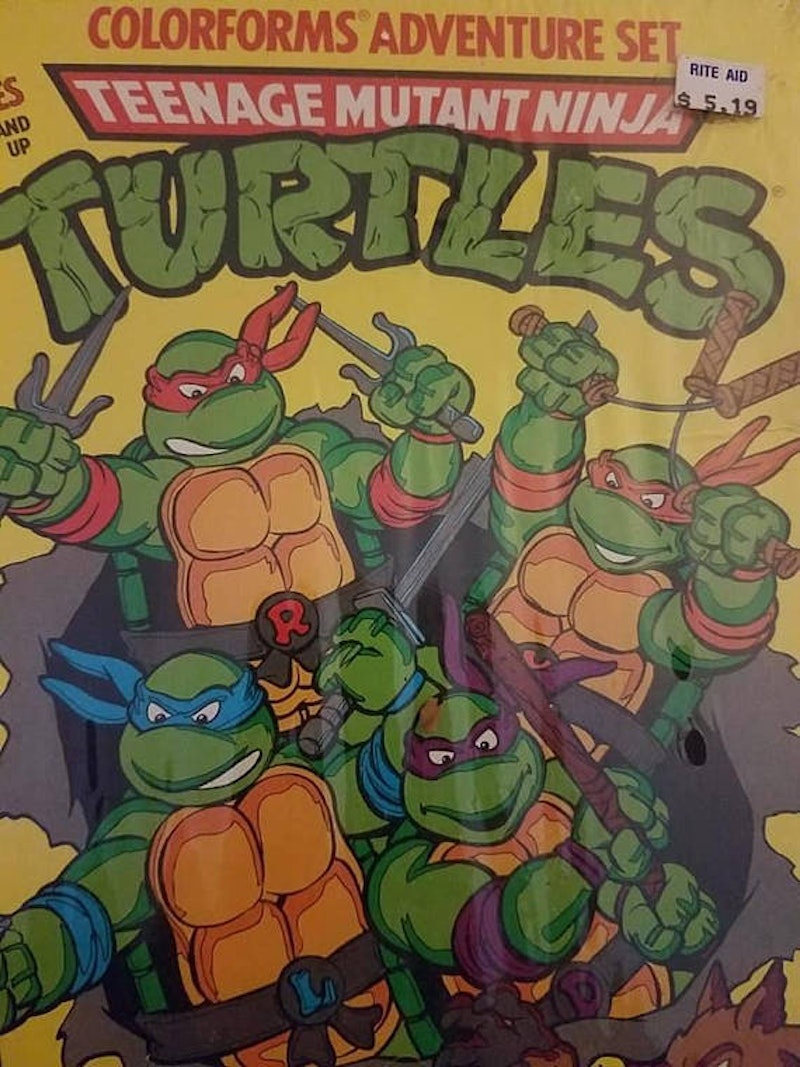 Born in the late 1980s, I was obsessed with Teenage Mutant Ninja Turtles. I inherited a truckload of the action figures from my older cousin. And my fifth-birthday party was turtle-themed. For this, my mom drew a life-size rendition of Shredder on cardboard, with a hole for my father to peek through. Attendees pelted him with wet sponges.

Recently, this led me to seek out a collection of the original comics that inspired the later movies, television shows, and toys. I should mention the excellence of inter-library loan. The system might not have all the obscure animal-rights books I want, but just about everything else I can get for free. I was pumped when Teenage Mutant Ninja Turtles: The Ultimate Collection, Volume 1 showed up in a matter of days.

Reading through it, I was surprised how fully-formed the universe seemed from the very beginning. Raphael was a hothead, Michelangelo was a goofball, Donatello was the tech guy, and Leonardo was the leader. Their origin story, and that of their master, Splinter, remained the same so far as I could remember. April O'Neill showed up in the second issue and Casey Jones made his debut in a one-off shortly after.

Of course, there were differences from the incarnation of the turtles I knew from the animated series. They were grittier. The brothers drank beer, occasionally swore, and impaled enemies on the end of their weapons. While the comics themselves were in black-and-white, by the fifth issue they had four-colored covers. At that early stage, all of the turtles were clad in red bandanas.

The eight issues included in the first volume of this collection are a blast. But, for me, the highlights of the book are creator Kevin Eastman's behind-the-scenes stories that are interspersed throughout. Co-creator Peter Laird didn't offer his commentary, but Eastman did a good job bringing readers back to 1984, when the duo came up with the concept in a shared living room, while watching television.

"We threw all our favorite ideas into a blender, lined up a story that made sense, then—all things considered—spent the next five months drawing it," Eastman recalled. "After spending all the money we had plus one thousand dollars we borrowed from my uncle Quentin, we printed 3,000 copies—pretty sure we would only sell one copy—and ended up selling them all in roughly thirty days."

Discussing the seventh issue, released in 1986, Eastman hinted at what was to come for the property. "We were doing some licensing (role playing games, collectible figurines, stuff like that), and we had gotten a few calls from agents telling us they thought our creations could be more than just comic books," he wrote. "We thought they were all kinda crazy and slimy."

I've already ordered the second volume of this collection. The first is a must-read for Teenage Mutant Ninja Turtle fans or anyone interested in pop-culture history. It's really amazing to see the humble origins of what would become a worldwide phenomenon, sweeping up what I assume to be millions of kids like me.