It's Time to Put Eminem's Albums Away

Why do so many white journalists consider him a genius? 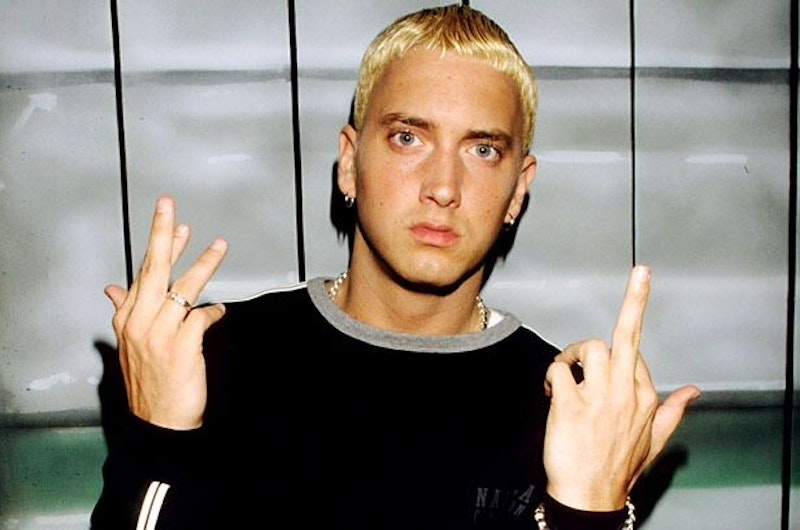 I was 15 when Eminem’s debut The Slim Shady LP was released. As an unhappy, bullied, insecure teenager, I’m now embarrassed to say it blew me away. The most controversial song, “97 Bonnie and Clyde,” is a sickening nursery rhyme where Eminem raps to his baby daughter as he buries his wife Kim at sea. On his Columbine-influenced album The Marshall Mathers LP, he raps a complex but morally disgraceful prequel track where he brutally murders Kim. Kim would eventually become a heroin addict and attempt suicide multiple times. But if I give Eminem any credit at all, it’s for introducing a middle class white boy from Kent to the dangerous, complex world of hip-hop, even if I think he’s one of the most self-indulgent rappers in music history.

The story of the evolution of his psychotic alter ego Slim Shady (which was far more effective in his rage-filled 20s) is unironically described in Anthony Bozza’s 2003 biography Whatever You Say I Am. “I was taking a shit, swear to God,” Eminem says about the morning he thought up Slim Shady. “I was sitting on the toilet and boom, the name hit me.”

That Bozza doesn’t question the inception of his nom de guerre, but simply accepts its idiosyncratic “genius” is indicative of the predominantly white journalists at Rolling Stone showing adoration for the first white Gangsta rapper circa 2003, seeing as Eminem had recently won the Best Song Oscar for “Lose Yourself,” taken from the now-dated 8 Mile. Too frightened to turn up to the ceremony, hilariously the award was given out by Barbra Streisand, who seemed overjoyed that her white prodigy had won, despite not having the guts to show up and perform his track in front of Hollywood’s power players. You can find the footage of the “win” on YouTube, and it’s the perfect summation of Eminem’s Democratic politics. He’s angry, but like all bullies not that brave.

My opinion is that it’s only young men and women with serious mental illnesses and genuine family problems that still listen to Eminem. I’ve met so many damaged psychiatric patients who require his albums, since they offer an excuse for their failures, drug habits and unhappiness. With rappers like Azealia Banks, The Weeknd, Kanye West, Rihanna, Jay Z, and lesser-known but brilliant talents like Kyyngg, Pressa and RondoNumbaNine, it seems at best desperate to even pretend that Eminem is a shadow of his former self. He may hate Trump, but his Trump battle rap is so poorly-constructed, not to mention he gives off the impression of a crack-addicted, aging rent boy. I imagine he voted for Hillary Clinton, and if so, let’s recall a famous, South Park-inspired line from "Role Model" in 1997:

Eminem rapped (20 years before voting for her): “Hillary Clinton tried to slap me and call me a pervert / I ripped her fucking tonsils out and fed her sherbet / bitch.”

It seems that many of his misogynistic lyrics are related to the tortured relationship he had with his allegedly drug-addicted, alcoholic mother. Disgustingly, some of his more psychotic fans threw bottles at her in the street.

Knowing what I do about the effect of Eminem’s music on the mentally ill, it’s time to put his albums away and spend some time considering exactly why so many white journalists considered him a genius. With enemies as weak and unpleasant as these, I don’t think President Trump has much to worry about in 2020.