A case of awful timing. 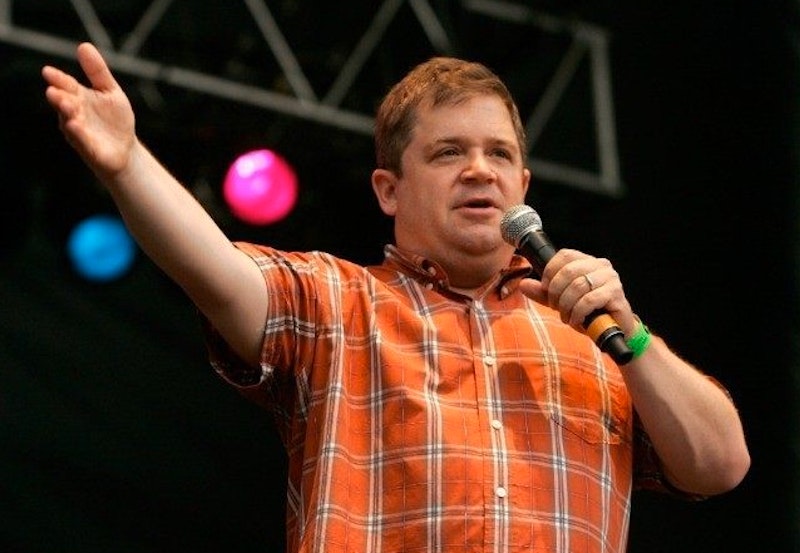 Patton Oswalt is a widower; his wife died last Thursday. It happened just like that, no warning, and we don’t know the cause. She was 46 and the couple’s daughter had just turned seven. The day after Mrs. Oswalt died, the comedian’s new concert show began streaming on Netflix. That’s tough for a comedy show, to follow someone’s death, but Talking for Clapping is in that fix. Of course, Oswalt has other things to think about right now.

On the merits, Clapping isn’t as good as the comedian’s other shows. Oswalt’s turns of phrase didn’t kick as high, his arguments didn’t tickle me. Sure, he made enough noise and filled the stage; he sounded like somebody disgorging angry, twisted wisdom. But factor out the presentation and the material doesn’t seem all that daring. He howls and barks about how there’s too much media trivia in his head. The bit comes off like a Dave Barry column in funky distressed type and with creepy line drawings in the border. On the one hand, he jokes about letting his daughter die (because Oswalt remembers jingles instead of CPR instructions). On the other hand, the irresponsible husband is a cliché, and so is the boy-man who loves childhood crap.

As a society we’re reaching the point where, how you say, woke becomes rote. Oswalt lives on that line. Consider his acted-out analysis of moviemaking: the male director shoots footage like jism, heedless; the female editor makes something of the mess. Flinging himself about onstage, Oswalt performs his impression of the dynamic, and naturally the director talks like a little boy, the editor like a weary, tolerant mother. Since Oswalt is a man, this picture is of himself. Certainly he’s no fan of his coping abilities. Elsewhere in the show, Oswalt has a bit where he reverts further, past being a boy who sprays fluids and all the way to a baby in need of a diaper. That’s my read of his anecdote about a terrible night in which he squirted vomit and diarrhea, squirted helplessly like a fountain. In his best concert film (My Weakness Is Strong, 2009), Oswalt imagined himself sliding even further, into blobhood; he saw himself with a future as a helpless sack used for its holes, strapped across a marauder’s bike during the post-apocalypse. He doesn’t present himself as somebody up to a challenge. But I reckon he is.

Oswalt is a depressive who keeps on going. I’m tough on him. Of the comedians I’ve heard lately, he seems the most stuck on being smart, the closest to being vain about it. He also has the screechiest voice and the most obvious belly. But I feel like I know him, and that’s because I’ve seen three or four of his shows over the past few years. He’s good enough to keep me coming back, and he works honestly enough that I have a sense of his life, of what being him is like, and part of the sense is this: he’s had to fight back against despair, and he’s done it. Now he’s been hit and I think he’ll cope, and that he and his little girl will fight through to a life that’s worthwhile again. One result may be a show that beats all his other shows. Excuse me for being that small-minded, but I’d like to see it.