There’s a dangerously thin line between panhandling and youth fundraising. 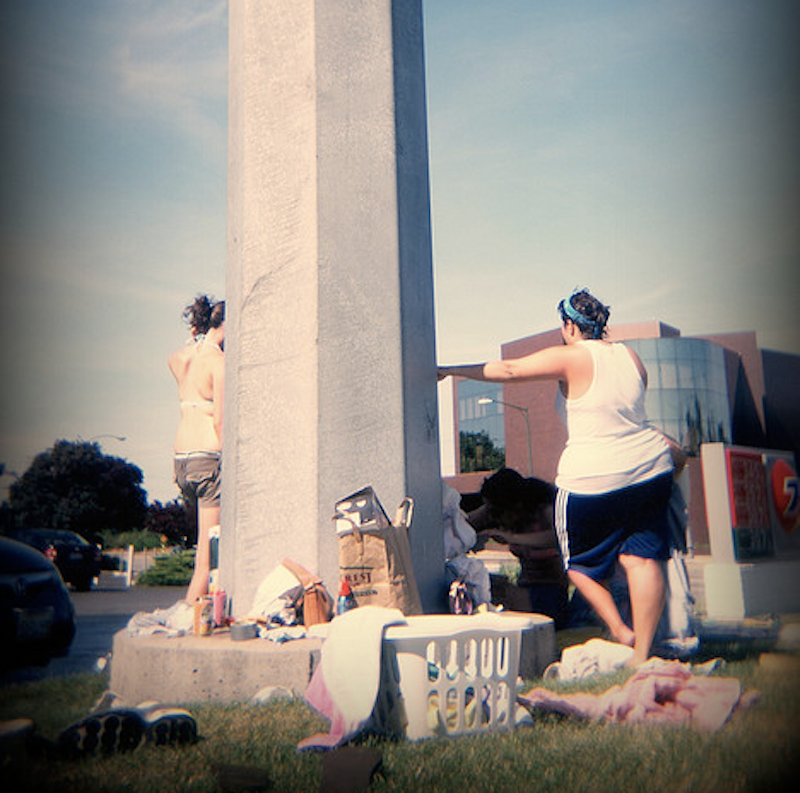 Would you believe me if I told you I was a crafty kid? I was a crafty kid. Blame the outrageously progressive private school I attended, the camps during the summers, the encouragement of open-minded parents, but I learned to make all kinds of shit with my hands. I put in some embroidery string time, although the results were embarrassing. I kicked ass on needlepoint kits from Frank’s. (Remember Frank’s? Anyone?) I busted out gymph earrings, keychains, and bracelets, and I was fast. I crocheted. I knitted. For a very brief period in fourth grade, I was in business with the son of hippie magicians: I made weird misshapen little pockets out of yarn, and he sold them. “I’ll sell some to my dad,” he enthused. “He can put the seed in there after sex.” I was confused, grossed out, mute. I think we earned a total of $2.50. Our in-class art projects went for sale at the open house winter fairs. But the point, mostly, was this: making all that shit was fun. And then later, as progressive elementary school melted into Catholic middle school, there’d be chocolate bars peddled to friends, family and total strangers for fund-raisers, and my mother would bake cookies or pumpkin muffins for sales to fund whatever my classes were trying to accomplish. Before then and later too, pre-real world: dinky homemade books, Kinko’s-enabled ‘zines. I produced, and produced. When I see skimpily-clad 13-year-olds shaking around and advertising car washes on Saturdays, something inside of me dies, but something else inside of me salutes, because ultimately, it comes down to this: washing cars is doing something productive to earn money. In its way, it’s not much different than Girl Scouts hawking cookies outside of a chain supermarket.

Panhandlers and panhandling are heavy themes to cover. Panhandling doesn’t bother me as much as witnessing the slow, slovenly birth of a nation of panhandlers. If you think you don’t know of what I speak, you’re wrong—unless you’re a trustifarian shut-in who hires people to do all of your shopping—because these panhandlers-in-training are everywhere, and they’re not asking for money because they want to eat, or because they can’t find work, or because they want to get wasted. No: these panhandlers want to go on band trips, or travel cross-country to athletic competitions, or any number of other worthy youth-oriented pursuits that ideally keep kids focused and on a good path and out of the streets. Which is awesome, and I’m totally for those things. (The cutting of education funding is a whole different ball of wax.) What’s troubling is that our culture is encouraging kids that the way to go about getting the money for this stuff is to stand outside of department stores and on median strips begging for dough, all day, every damn day, soliciting loose change by dint of their willingness to be blithely ignored by people who wouldn’t shop if they didn’t have to. If you’re the parent of one of these kids, you’re a part of the problem. Whatever happened to spending a little money to make a little money, to coming up with a commodity that can be exchanged for cash that can buy memories and experiences that are character-building and last a lifetime? Kids have lots of energy, and spare time, and they’re adept at picking up new skills. And you know what? Nobody wants to dump a handful of coins into the waiting Big Gulp cup of some kid mumbling the same entreaty all day so he can earn some cash to earn Greyhound fare to a bowling tourney; at least some people will cough up green if that same kid is selling sandwiches, hot dogs, or ceremonial 1/100 scale totem pole keychains carved with a Swiss Army knife. Here’s to a can-do future and a can-do nation, to making something out of nothing, not begging listlessly for what you think you deserve.