It's Wayne's world, we're just living in it. 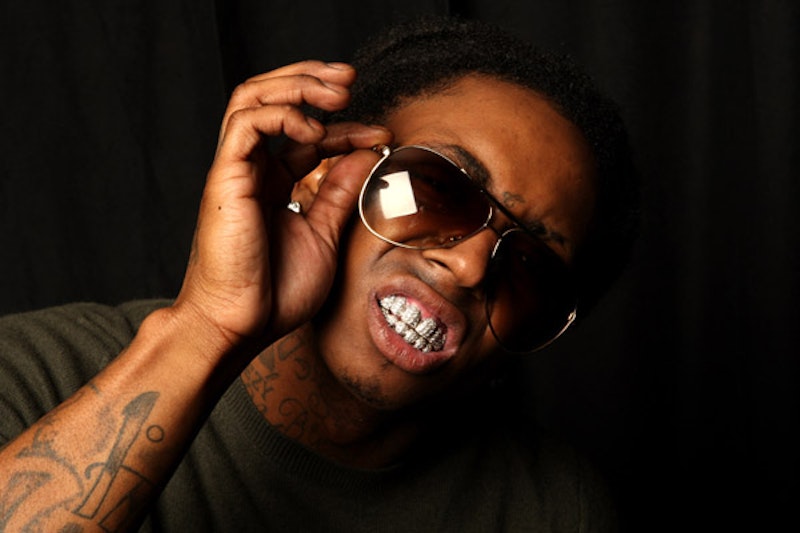 Lil Wayne is considering dropping the “Lil” from his name, but he’s conflicted, waffling on the change. Lil Wayne remembers how, some years back, Snoop Doggy Dogg evolved into Snoop Dogg, but the circumstances were different, Snoop’s handle had three words while Lil Wayne has only two, apples to oranges. Well, Hot Rod became Rodimus Prime, didn’t he? But to Lil Wayne’s thinking, the “Wayne” component of his sobriquet is pretty much immovable, and there’s not much further one can go with “Lil” without straying into horticultural or Gulliver’s Travels territory; it’s risky, and after some prayer and a conference call with Baby, Humpty Hump, and Michael Phelps, Lil Wayne opts to remain “Lil Wayne.”

Lil Wayne is riding around outside of your house on a child’s bicycle. Or maybe it’s just someone who looks like Lil Wayne, a Lil Wayne wannabe. No, no! No that’s just Reggie. Reggie!

A little-publicized fact about Lil Wayne: Lil Wayne enjoys driving his European sports coupes cross-country, and often, when you might assume that he’s flying from Miami to Arizona or from L.A. to Atlanta, a dreadlocked, hooded imposter is ascending the stairs enfolded by an entourage while a skull-capped, sunglasses-free Lil Wayne weaves reckless through interstate traffic in a Ferrari or a Lexus or a late-model edition so new and exclusive that, legally, he’s not allowed to brag about it on mixtapes.

An even less publicized fact about Lil Wayne: on these Fast and the Furious-esque jaunts, Lil Wayne stops for hitchers. Usually, he’ll inquire as to where they’re headed, then engage in a bit of small talk, then babble mindlessly and one-sidedly about whatever’s happening in the NFL, then mumble something about how he’s seen The Hitcher two dozen times, then out of nowhere Lil Wayne is vociferously and repeatedly rapping The Carter IV in its entirety over whatever hair-metal happens to be blasting from his BOSE speakers at a suddenly earsplitting volume, rapping guest verses in Big Bird and Erkel voices, beating the steering wheel so hard that he bloodies his hands, spattering the windshield and expensive upholstery and Lil Wayne has this thing where as he’s coming up to wherever his passenger wanted to go, he’ll start driving murderously, demonically fast, like cosmically fast, warp-drive, laughing crazily and switching between rapping in that infectious, hash-tag Lil Wayne style and a disturbingly on-point imitation of Denzel Washington in Training Day, and then just when the passenger is about to lose all control of his or her facilities, Lil Wayne screeches to a dead stop two or three or twenty miles outside of whatever the destination was supposed to be, chuckles, croaks “users are losers,” blows town in a flash.

Lil Wayne is sipping a Perrier, sitting alone in the outdoor area of a penthouse café, awaiting the arrival of the author Haruki Murakami. Lil Wayne is out of sorts, owing to the fact that he has been awake for the past 72 hours, gobbling Gobstoppers and cycling unevenly between The Wind-Up Bird Chronicle, Kafka on the Shore, and After the Quake, and because since arriving in the lobby of the building where the penthouse café is situated, Lil Wayne has experienced a distinct sense of unease, of dread, of existential unreality, and everything and everyone is suspect, potential talisman or agents suffused with unholy and unknowable intent: the idle bellhops, the flirtatious concierge, the gold-plated ashtrays, Bono and Billy Joel taking tea, the waiters unambiguously snapping iPhone pictures with an arrogance that paralyzes Lil Wayne, who suddenly craves high-grade hydroponic weed with an intensity he hadn’t experienced since his first few months behind bars. And so Lil Wayne is wary. Lil Wayne is shivering. Lil Wayne is startlingly ashen. Lil Wayne can’t get the beat to “A Milli” out of his head. Lil Wayne has intentionally seated himself with an unobstructed view of all possible entrances and exits here, and is running through contingencies in his mind, contemplating whether the Perrier bottle is a viable weapon, wondering why he has agreed to meet Murakami for an early lunch in this café, wondering when the author will, impossibly yet inevitably, tap him on the shoulder, bow formally, gesture toward an unoccupied chair.

Lil Wayne breeds and grooms dogs for dog shows.  A sharpei named Knuckles is presently his pride and joy.