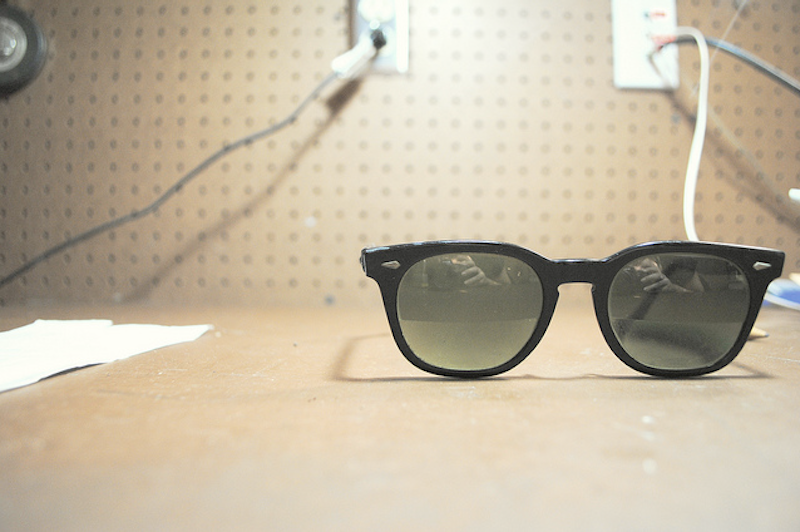 I wear eyeglasses. I can’t wake up in the mornings and welcome a beautiful day without first grabbing my glasses to see it. I suffer when it rains and drops of water latch on to my lenses and am momentarily blinded when my glasses fog up because I’ve entered a bar teaming with sweaty dancing drinkers. Smudges on my specs are the worst. In other words, I am a “four-eyes.”

So why, with all the nuisances, do some people think it’s cool to wear glasses?

I was recently assisting a stylist at a photo shoot when the photographer suggested we put a pair of glasses on the model. “But they don’t have any lenses in them,” I asked, confused when she handed me a pair of empty frames. “Oh, I know. I popped the lenses out of these sunglasses.”

I’ve become accustomed to these ways of constructing an image when I’m at a photo shoot. What you see on the pages of magazines are more examples of artifice than representations of reality. The bespectacled model in the picture doesn’t really need glasses to see; it’s just for show—to make him look smarter, more casual and welcoming. That’s fine, but then there are those guys and girls who decide to slap on a pair of non-prescription glasses as part of their outfit. What’s that about? What are those hipster-minded folk trying to accomplish?

Before elaborating on this trend running rampant in Brooklyn, I’ll turn to another New York figure. Theodore Roosevelt, in the late 19th century, championed a revised interpretation of masculinity. With the growth of the city and industrialization, there was a widespread fear of male feminization—in cities, men were now considered part of a mass, working to service a corporation and not their own innate value, significantly changing notions of masculinity. The shift from the rugged man outdoors to the industrial urban laborer incited Roosevelt to launch a campaign promoting athleticism, the wilderness, and virility. When he became president at the turn of the century, America knew Roosevelt as the guy who would inspire boys to be “real” men and would deter them from the effeminate lifestyles of the city.

Most of us are aware of the image of a gallant Teddy atop a hearty stead; the president that Robin Williams aped in Night at the Museum. He’s supposed to be the epitome of turn-of-the-century manliness: strong, brave, and robust. But there’s a flaw. His stern countenance is adorned with tiny specs! These glasses challenge the very idea of his virile ruggedness. It is a sign of weakness; indeed, a vulnerability in plain sight that undermines his efforts against male frailty. It’s a funny irony to have this man advocate male vigor when he was dependent on something, looking at the world behind lenses of ineptitude.

For most people, glasses usurp any other trait of a person. Maybe we don’t remember Theodore Roosevelt in terms of his glasses, but we do for Buddy Holly, Allen Ginsberg, Tina Fey, Woody Allen and Carrie Donovan. These are celebrities whose glasses dominate their personas in our collective memory. Yes, they’ve accomplished more important things; they are rock stars, writers, comediennes, and directors, but it is their image that relies on eyewear. Would they be so easily recognizable without the frames on their faces? This is a clear example of synecdoche: one part stands in for the whole—a pair of eyeglasses, one element of a person’s look, represents their entire image. Some don’t see those large black circular frames without associating them to Donovan, late style editor of the New York Times magazine and Old Navy spokeswoman.

Maybe it’s for that reason that we want to wear glasses—so that we have an identifiable trait, something on which our constructed image can pivot. “Do I look smart with these,” the model had asked after the photographer goaded him to try the frames. “No, you just look like someone wearing eyeglasses,” I responded facetiously.

When did eyewear become an accessory that can transform someone into an intellectual? And this is where I return to the hipsters wearing non-prescription glasses. I recall a slideshow of pictures released a couple months back. In it were your Disney princesses “going hipster.” What that meant was someone had photoshopped a pair of thick black glasses on the faces of Snow White, Pocahontas, and Ariel with an accompanying sarcastic quote, and that was your princess hipster-fied. Can we not imagine the hipster without tacking on a pair of black frames?

So, eyeglasses have become an accessory. But why? Would you call someone’s hearing aid an accessory? It functions in a similar way, yet we don’t wear a hearing aid to make a fashion statement. It’s only used if we are verging on deafness.

Like many other vision-impaired individuals out there, I wear glasses for practical purposes. The funny thing is that I’m continually asked whether or not my glasses are real. Ten years ago, that question would’ve never come up.