In a Barneys storefront window, if possible. 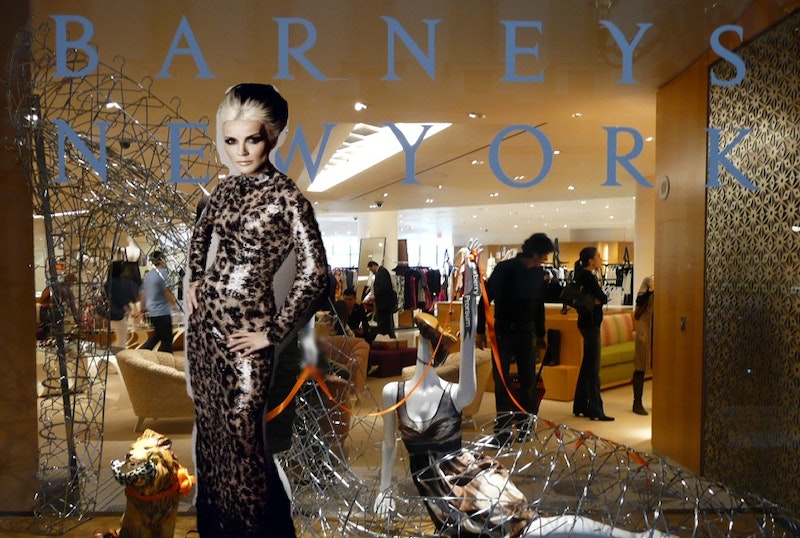 Yesterday at five p.m. I watched the incomparable Daphne Guinness get dressed in the window at Barneys. Daphne has always been one of my favorite style icons, and one of the few great ones left. It was fascinating to watch her transform from glam to otherworldly. So thank you, Daphne, for giving me the most fabulous 10 minutes of 2011!

Daphne’s presto-chango was on the occasion of the Costume Institute Gala at the Metropolitan Museum of Art, chaired by Anna Wintour, also known as “The Oscars of the East Coast.” This is the big party where the stars come dressed to impress. Seriously—it’s one of the only instances where the event is the red carpet, no matter what’s happening inside the Met.

I got to Barneys around 4:30 and found a crowd of about 50 people, much smaller than I imagined. A lot of the crowd was press, but the bulk of them were fashion freaks—boys in eyeliner, capes, and high heels, girls in handmade couture, veils, where the stranger you are, the better you’ll fare. Half an hour later, when Daphne came on, the crowd doubled in size, with curious passersby asking, “What’s going on here?” By then, everybody had already busted out their iPhones and Blackberrys and started snapping videos of Daphne’s performance. And, just so you know, it wasn’t some vaudeville show—Daphne very tastefully and artistically got dressed inside a muslin-lined cube, which from the other side of the window looked like she was performing some kind of couture magic trick.

When she finished dressing, Daphne vanished into thin air and the crowd immediately shifted. I didn’t know what was going on, but went with the flow anyway—always go wherever the crowd goes. Minutes later, Daphne came out of the store and hurried into a vintage white Mercedes convertible that was parked right outside. Can you believe it? I was a mere 10 feet away from the back of Daphne Guinness’ head. I can’t handle all the glamour!

And poof—just like that the high fashion happening was over.

But people milled around anyway, still electrified by Daphne’s presence. As much as I love Daphne, I think the real event wasn’t so much her dressing as it was the different kinds of people who gathered to see her performance. Fashion was the event; fashion is an event. People lingered around for 45 minutes after she left. And talk about eccentric fashion freaks! Hamish Bowles of Vogue popped out unbeknownst to the crowd, dressed in a custom McQueen suit with skinny legs and enormous parachute arms. But the high priests of fashion aside, I’m talking normal people here, there was black, white, Asian, gay, and even a couple of straights all gathered in their wackiest wear to catch a glimpse of Daphne. It felt like some kind of Fashion Halloween—so fun!

One thing we can learn from fashion freaks like Daphne Guinness and all her fans is that the world would be much better if everybody dressed like no one was looking.