My Crush on Pope Francis 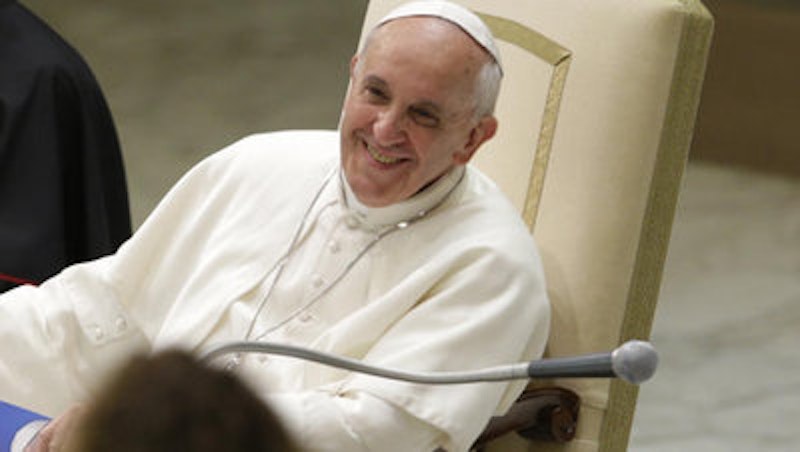 I can’t think of anyone on either side of my family who isn’t a Catholic. My father’s ancestors were fervent Catholic landowners in Sicily, and having a nun or priest in each generation was the norm.

I was taught by nuns the first eight years of my life and then had an awakening in high school when educated by young, liberal Christian Brothers who had just come off the Vietnam era and questioned all the ageless doctrines and dogmas.

As a young woman in my 20s, I could no longer relate to the antiquated theology of Catholicism. I was tired of the ancient priests and bishops driving the church forward while looking in the rear view mirror. I was married by an Episcopalian priest much to my parent’s dismay. The Episcopalians were so much more hip. They had women ministers, they didn’t judge my Lutheran fiancée and they didn’t make me buy into the whole Vatican roulette scam when it came to birth control.

Then along came Francis. I had hoped for a younger bishop of Rome after Benedict stepped down, but I was amazingly surprised by the 76-year-old pope from Argentina. In July, I found him surrounded by millions of young people and pilgrims chanting “Papa Francisco” to the rhythm of bossa nova music on the glitzy Copacabana beachfront. In return, the Jesuit told the crowd he wanted “things to get messy and stirred up in the congregation” and radically encouraged them to “take to the streets.” I smelled revolution.

Francis is the real deal. The washing of the feet is an important religious papal rite. Although in the past his predecessors washed the sanitized feet of priests, the new pontiff chose to get down and dirty and wash the feet of prisoners, two of them women. That was unprecedented. He’s repeatedly proved that he wants to break away from his privileged life and act as a humble servant of his faithful. He carries his own briefcase and has chosen to live in the Spartan guesthouse versus the royal papal apartment.

During a revealing interview this week, Francis set a different tone for the one billion followers worldwide. When asked about homosexuality, he stated, “Tell me: when God looks at a gay person, does he endorse the existence of this person with love, or reject and condemn this person?” He added, “Who am I to judge?” His critics had a field day. In a broader statement, he humbly called on the clergy to find a "new balance" between its spiritual and political missions, or it will "fall like a house of cards.” He sees the Church, not for what it is, but what it stands for in its truest sense.