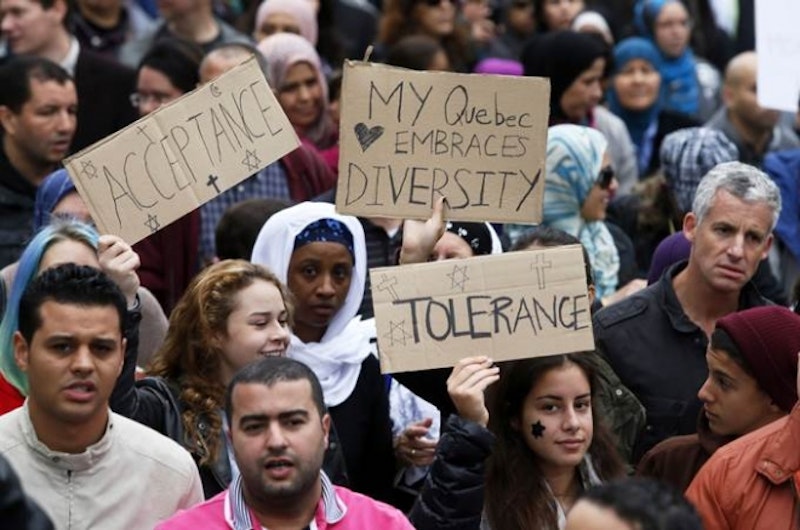 Muslims, Jews and Sikhs are being hassled up in Quebec, the big and beautiful Canadian province founded five centuries ago by French colonists. Like most of the industrialized world, the Québécois have been letting in large numbers of foreigners to bulk out the population. Now the province's government wants to make trouble for some of these imported Quebeckers. The governing party lacks a strong hold on power and wants to rile up the province's backwoods element, the people living in the countless small towns strung along Quebec's giant hinterland.

The proposal, called the Charter of Québécois Values, would ban public employees from wearing “ostentatious” markers of their faith. The government, run by the venerable Parti Québécois, says the ban would make Quebec more perfectly secular. Not so secular as to do anything about the cross that hangs in the province's National Assembly. But secular enough to make life difficult for people who wear yarmulkes, hijabs or Sikh turbans and who want jobs as nurses, orderlies, school teachers, municipal accountants and so on.

The rule would also apply to very large crosses worn on the person, but such crosses are more of a Nashville thing. Really the ban is aimed at Jews, Muslims and Sikhs. They must not do what they're doing, which is to look different. The government can't enforce that rule on the street, but it can enforce it among members of the population who want to do work that is modestly well paid and useful to society, the sort of work often done by immigrants trying to move up in their new country. It's kind of a mean blow, really.

Most Québécois aren't sold on the idea. Polls indicate that yes and no are evenly split, with a large share going to undecided. The Parti Québécois commands just a plurality of the votes in the legislature, not a majority, so the plan might not go through. But if the legislature does kill the plan, the government gets to call an election and rally its supporters in the boondocks against the yarmulkes, hijabs and turbans. It's a win-win if you're desperate enough, which the PQ is.

The party was founded 45 years ago to make Quebec an independent nation, but that hasn't happened and few people now want it to. Last year the PQ fluked into power because of political scandals. Rather than shuffle off again, it's scratching around for an enemy to sell the stalwarts who once railed against English Canada. What it has come up with are brown girls who want to put scarves on their heads.  It's time for the party to die.

Personal note. “It stinks,” says the one working-class Québécois that I know. He's a low-grade anti-Semite in that he thinks Hitler had to do what he did, the beginning stuff anyway, to get Germany back from the Jews. On the other hand, my friend doesn't sit around thinking up bad things to do to minorities. His personal meanness doesn't get directed into political or ethnic opinions. He just figures that, okay, everybody knows what the Jews did to Germany. You can see the newsreels: the money in wheelbarrows, the shattered streets. That's enough for him. I should mention he never got past ninth grade and still considers himself the smartest kid in Saint-Roch-de-Richelieu.

Even so. “It stinks,” he said, and his voice thickened. He had in mind the Muslim nurses at the hospital when he broke his leg. But he threw in the Jews too, for my benefit. “And if some guy wants to wear a cap, okay,” he said.