Too dumb for Marty McFly. 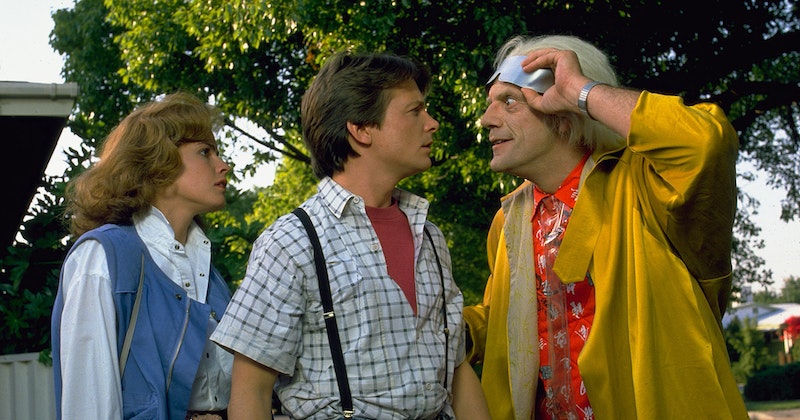 There was no warning. There was only a vague gesture at a reason; October 21, 2015 featured in the movie, I guess. Yet on that slim thread of relevance, here it was, returned out of the past. USA Today ran a mockup of the future October 21, 2015 front page from the film. The Guardian had an all-day Back to the Future feature. And I had only one anguished thought.

Why didn't someone tell me this was coming so I could pitch a think piece?

There was nothing to think about. It was one of those Hollywood blockbuster sequels which was created by a committee of monkeys randomly assembling tropes. The original film was an exercise in pallid 1950s nostalgia, and an excuse to watch Crispin Glover. The second was a shambling cash grab with neither heart nor brain. It sat on the screen and twitched. Without Crispin Glover.

And, apparently, though I don't remember this, the film made supposedly funny predictions about October, 21, 2015. Most of which didn't come true, but some sort of did.

There’s nothing charming or worthwhile about Back to the Future II. Its sudden ubiquitous presence is the sort of pop culture hive mind brain fart that suggests our civilization has turned into a giant marketing endeavor designed to repackage our own smelly-end products. We aren't a democracy; we're a copography.

As a freelance writer, my job is to write articles on the same topics everyone else is writing articles about. When the Avengers film comes out, you write about the Avengers. When Beyoncé releases an album, you write about Beyoncé. You're supposed to coordinate your own brainstem with the herd, so that you begin to lumber even before the mass of ungulates realize that they're stampeding. To chew the cud first, but not too first. That is the noble goal of cultural journalism.

And I failed. I had no idea Back to the Future was suddenly going to come zipping out of the past bearing the smug visage of Michael J. Fox and dripping forced and feeble irony. I failed to check the listserve for shameless freelancers; I hadn’t followed the right trendsetters on Twitter. If only I could go back three weeks and tell my former self to pitch it. "Write about how Marty McFly inventing Johnny B. Goode in the original film is a travesty," I would have told my former self. Relevant! A chance to talk about Chuck Berry! Hurry, do it now, before the future catches up to you!

But there’s no time machine that can reverse my woe to "eow!" and bring back the Chuck Berry Back to the Future think piece that never was.  All I've got is a belated lament. I missed my ride in the DeLorean, and I can't even feel superior to all the people who vacantly jumped aboard. I would’ve joined them, if somebody had pointed me to the right timeline. I'm not smarter than everyone else; I'm just worse at predicting the stupid, entirely predictable, future.