Three shows in three days, that was our goal. 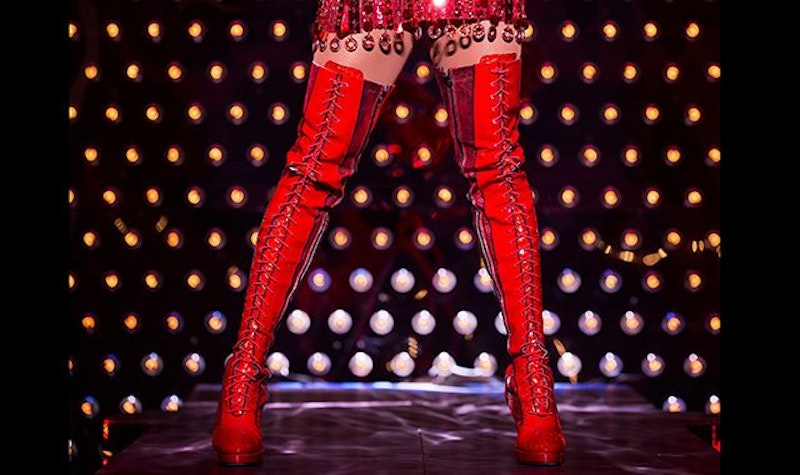 On Friday my friend and I went to a tiny theater on Baltimore’s St. Paul St., Spotlighters, and saw a musical, A Sensation Novel, which was a bit monotonous but still a good primer for the weekend. On Saturday we were surprised at how much we enjoyed Pride and Prejudice at Center Stage, a requirement for my friend’s theater class. We had a plan to sneak out during intermission if it was unbearable or the bar wasn’t open, but found it to be upbeat and even funny. The blue-hairs next to us loudly reviewed it as “the best love story of all time.”

Sunday was the day we’d waited for. Waking up early, we went to the Hippodrome and stood outside in the cool morning breeze, waiting for the box office to open and sell their “rush tickets,” those left on the day of the production. The show was Kinky Boots, which I’d heard was associated with Cyndi Lauper, but didn’t know anything else about. We scored the tickets for $25 each (originally $90) and sat in the deli across the street, waiting for the doors to open.

When we walked in the lobby, there were women donning an array of wild boots: leopard print, neon and sparkles. I felt like a nun in my plain black ones. The crowd was buzzing. It was a touring Broadway cast, but from the amount of Kinky Boots t-shirts, there was definitely a cult following.

The show began in a dismal shoe factory in England, where main character Charlie is working to improve business. There’s a slightly confusing scene during which he falls in an alley and is approached by a mugger, but is saved by Lola, a fabulous drag queen. Lola works in a shabby club with a chorus of other fabulous drag queens. The costumes and makeup were perfect; I was blinded by the glitter even from my distant seat. Lola, played by Kyle Taylor Parker, had a commanding stage presence and one of the best voices I’ve heard.

After a few numbers, the show took an unexpected turn. Until then, the plot was going in a cheerful direction, Charlie’s factory now revived by manufacturing boots for drag queens. Homophobic, gruff factory workers began harassing Lola, and she becomes Simon. Without high-heeled boots, Simon is short and meek. He sang “Not My Father’s Son,” about being rejected by his homophobic dad. Unlike his previous, powerful numbers, this one was quiet and despondent. I started crying. Seriously crying. Due to a sinus infection, I was in desperate need of tissues, which led to extreme sniffling and digging though my huge bag to find an old Dunkin’ Donuts napkin. After that point, the show focused on the homophobia that Lola faced as a child and an adult. I didn’t care about Charlie and his whining about the shoe company. Eventually, he discriminated against Lola, after which I hated him. Lola then sang “Hold Me in Your Heart” at a retirement home gig that she had mentioned earlier in the show. She also explained that her dad died of lung cancer, joking that “fags killed him in the end.” After performing an incredibly passionate song, the lights went up and Lola turned to a man slumped over in a wheelchair and said, “Hi, dad.”

That was it. My friend and I looked at each other, and tears started streaming down my face. As we left, shaken from the surprise of an emotionally stirring performance, we talked objectively about actors’ performances. When we got to Lola, I simply shook my head and said that I wished I’d brought tissues.