Anti-gay or what? The troubled singer sends a mass of mixed signals. 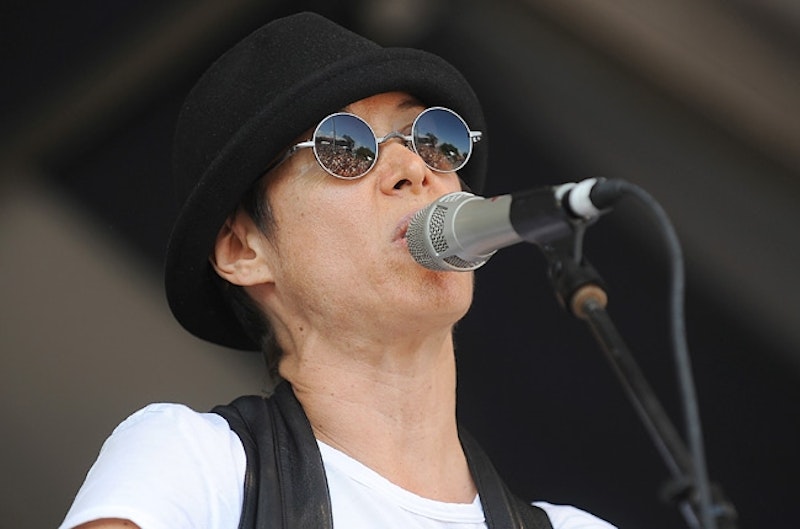 Michelle Shocked is not getting well, not making sense and not shutting up. Last Thursday, she left a podcast interviewer dangling for an hour plus. They had set up what was to be a live interview over the phone. The interviewer, Nicole Sandler of Radio Or Not, called Shocked's number again and again. What she got back was the singer's voice mail (a chipper “Hi, thanks for your call, please leave a message”) and a series of Tweets. The journalist and the singer didn't have a conversation until extra innings, when the show was playing out with a Shocked oldie. Skype gave its boop and the interviewer picked up. “Finally,” she said. Then, from over the phone, a voice said, “Shame on you!” It was Michelle Shocked, being crazy.

The trouble began March 17. “Once Prop. 8 is instated, and once preachers are held at gunpoint and forced to marry the ho-mo-sexuals, I’m pretty sure that that will be the signal for Jesus to come on back,” Shocked told the crowd at a club appearance in San Francisco. A few moments later: “If someone could be so gracious to Tweet out, ‘Michelle Shocked just said from stage, God hates faggots, would you do it now?’” People have been debating what she had in mind. Was she saying that would be the dumb takeaway version of her onstage philosophizing? Or, if you'll pardon the language, was she saying that God hates faggots?

The second interpretation gained major ground when a recording of her comments appeared on the Internet. The headline for The Hollywood Reporter's blow-by-blow account of the audio said it was “damning.” The recording came out on March 20, the same day that Shocked returned to Twitter and also released two media statements. “I do not, nor have I ever, said or believed that God hates homosexuals (or anyone else),” said the first, in part. “I said that some of His followers believe that. I believe intolerance comes from fear, and these folks are genuinely scared.” The slur about gays? “I was predicting the absurd way my description of, my apology for, the intolerant would no doubt be misinterpreted.”

Her next statement followed up with a declaration that, as a Christian, she can hate nobody, not gays and not her fellow born-agains. The statement reads like a heroic effort at clarification and PR cleanup (“hear me now”), but the message still has some static. “To be clear: I am not now, nor have I ever been, a member of any so-called faith preaching intolerance of anyone,” the statement proclaimed. Then who are the fearful co-religionists who need reassuring about the gays?

What the hell? The message that most listeners got from her audio comments was that Shocked had meant her remarks in one way only and not at all a good way. That is underestimating her knack for confusion. Take this sentence, which she snarls as the concert lurches toward its death: “I am sick of Christians filled with hypocrisy, hiding behind the symbol of the cross.” The Hollywood Reporter said she shouted this; a gay blogger, writing up his own transcript, said that she “literally hisses” the words. At any rate they stand out. They make up by far the loudest and most angry sentence spoken by Shocked during the whole recording. A strange choice in a rant that's supposed to be against gays.

Another example of her scrambled communication: her mysterious distinction between truth and reality. That was the official theme of the Sunday concert. Three placards were lined up behind Shocked to spell out “Truth vs. Reality,” and audience members were asked to choose between a “Truth” playlist and a “Reality” playlist. It's unclear which they chose. An account based on Tweets by an audience member said they chose to hear “Truth” first, possibly because it included all the songs on her breakout album of long ago, Short Sharp Shocked. But when Shocked began drawing gasps with her thoughts about the gays, she let drop the following: “You said you wanted reality!” Then came the “God hates” comment.

In typical fashion, Shocked doesn't appear to have spelled out the difference between truth and reality until Wednesday, when she began tweeting again. Even then it was hard to see what the distinction was based on. But it was clear which of the two, reality or truth, the singer wanted the tweeting public to give her. “Truth=patient kind loving faithful trusting Reality=ugly spiteful hateful petty self-serving Talk to me Twitter,” she wrote. The response was not good. “It's been real, Twitter,” Shocked tweeted at day's end, “but it ain't been real fun: Truth-5 Reality-20. Tune in tomorrow 8am PT when @nicolesandler calls #truthvsreality”

Sandler vs. Shocked. Fatally, the next day arrived. The Hollywood Reporter had said the talk with Sandler would be the singer's “first post-debacle interview.” Instead it was just more debacle. Sandler's patience wore thin fast as she kept getting the answering machine. Soon she had begun playing back the concert audio and throwing in her own unfavorable commentary. Shocked took issue with her via Twitter. “This was all said in the context of the audiences request for Reality,” she wrote, and “Point out the audiences gentle laughter. They got it at the time.” Sandler, not wanting to let Shocked wriggle out of an interview, refused to read the tweets on the air.

When the singer decided to phone in at the last minute, she did so to scold Sandler on very thin grounds, namely that the concert audio was a bootleg (Shocked sees her art as her child and bootleggers as kidnappers) and that there was a 10-second delay between Sandler's remarks and when Shocked heard them (so, in her view, the interview would not be the real-time exchange she had been promised), and that Sandler had commented on the audio as it played. “You are exposed,” the folk singer said. “Your agenda is exposed.” She didn't say what this agenda was beyond “defending the status quo”—no word as to what aspect of the status quo. The interview was over soon after that.

Dashing haircut. Shocked is a wiry, short-haired, pants-wearing guitar strummer who has had a gay following from the start of her career. Now she's an apparent homophobe. Is she gay herself and therefore a tortured closet case? She was married for 12 years but at least once she has gone on record as saying she has had sex with a woman. “I was with my first woman lover about a year and a half ago,” she said in 1990, when she was 28. Assign this fact whatever weight you choose. Meanwhile, to remember the good times, here is the young Michelle Shocked with her acoustic guitar, sweet face, and remarkable haircut. She's singing “Anchorage” to an unseen crowd that no doubt wants to take a break from fussing over Reagan and the contras.