The comedian's case makes him sound like he's proud of being stupid. 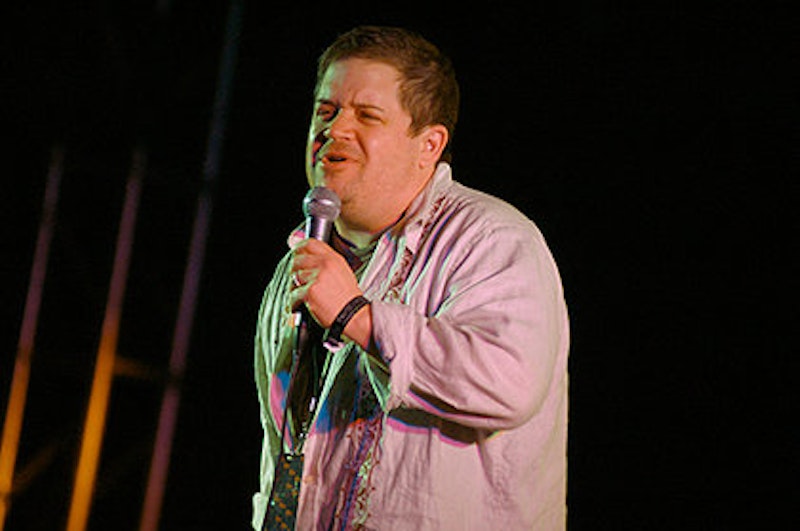 The first job of a stand-up comedian is to bray. I draw this conclusion from watching Patton Oswalt. Google his name and the second video that turns up is “At Midnight I Will Kill George Lucas.” The routine in that clip is an example of dumbness made triumphantly articulate.

Oswalt considers himself intelligent, not just a wise guy. When he's reminiscing about idiot network notes that he's received, he isn't just complaining, he's setting standards. That's the tone anyway, and I don't say it's wrong. Yes, he's smart. Most of his stuff works and it isn't because he's dumb. Yet here's Lucas and the shovel.

The routine goes like this. Oswalt says if he could travel in time, he'd use his power on something nerdy, like going back to kill Lucas before the prequels got made. Why? Here he switches his premise a bit. Now he imagines a conversation between a mid-90s Lucas and a mid-90s Oswalt. Lucas talks up these movies he has coming, the three prequels, and Oswalt is horrified. Noisily horrified and elaborately insistent, in a disheveled Gen X way: “I don't really care about that at all. At all, at all.”

What does Lucas have to say? Well, in these prequels he will have Darth Vader as a little kid and Boba Fett as a little kid, and there will be a shot of the Death Star getting built. Oswalt treats all that as an offense to aesthetics and common sense. Hence the squawking and the braying. The base of all that noise is the idea that nobody could possibly want to know new things about a character. Take Darth Vader. Oswalt: “I just like the helmet and the sword and the cape because that's what's cool about him.”

Imagine somebody pulling that line in 1974. “Vito Corleone when he was young? I like him when he's Brando. When he's got the stuffing, the cotton in the cheeks, and that, that cool morning coat, and he's sitting in a chair and there's a kitten. All right? Because that's the Godfather and he's cool!” It's a stupid, spoiled way of thinking. A really dumb network executive might trot it out. But here we have Oswalt, delivering his numbskull note at full volume: “I don't give a shit about where the stuff I love comes from. I just love the stuff I love!” Aw, love.

The audience is laughing right along, so I guess there are people who buy the above line of reasoning. They're wrong. The turn-of-the-century Stars Wars movies are terrible, but not because George Lucas tried to tell a story about how people become themselves. The dialogue is stilted, the actors are deadened, the plots clogged by exposition and failed thrill-ride sequences, the screen by CGI so oppressive it feels like the actors are entombed. Those movies are torture. But the only thing Oswalt took from the experience was that he didn't get the hamburger he ordered.

It's not like he's dumb. But this is what comedians do: they spray out noise that is laced with rhetoric. At some point on Opie & Anthony, Oswalt talked about voicing opinions. His view, as I would summarize it: you had to say something, you did say something, and now you're on to the next thing. To me that sounds like a working comedian's principle of life. It's your business to have stuff coming out of your mouth. This stuff will be many things, depending on circumstances and the breaks. Sometimes it will be intelligent and reflect your considered judgment of the world. But not necessarily.

The capper of Oswalt's Lucas routine: if you like the prequels, then maybe you'd like rock salt instead of ice cream, because the rock salt becomes ice cream later on. Maybe if you like Angelina Jolie, then you'd like Jon Voight's sweaty ballsack. This seems like something a studio exec might say to himself after getting shot down by a sacred-cow production honcho. The little bastard had deigned to accept and then reject the exec's note (Where L. Ranger's mask? Horse?), and God, you should have seen him get high and mighty. Character dimension, epic sweep, saga.  Hours later we have the exec sitting at a traffic light. “The pink, glistening ballsack she swam out of,” he says vengefully.