Michelle Shocked Was Also Crazy and Unpleasant in the 1990s

The alt-star who now hates gay marriage has a history. 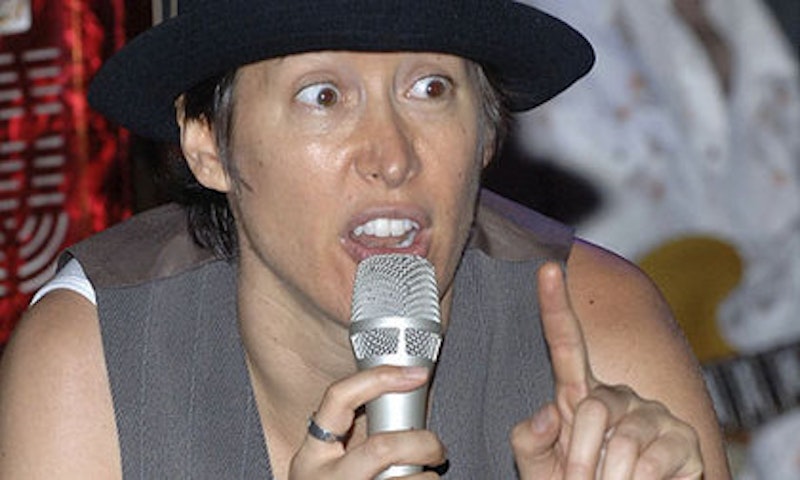 Michelle Shocked isn't as big as she used to be, and she just got smaller. Last Sunday the singer-songwriter told a club audience in San Francisco that gay marriage would destroy civilization. She also told them to “go ahead and tweet or write and say that Michelle Shocked says God hates f—s,” according to an account by an eyewitness who is delicate with bad words.

The audience walked out, the club owner (a gay man) shut down the lights and power and banned the singer from his club, and soon enough Shocked's concert dates had been scrubbed by nine of the 10 venues where she was planning to give shows. The exception, oddly, was a place in Madison, Wisconsin. We'll see how many people turn up.

Michelle Shocked is kind of crazy. To put it another way, she is someone who has long struggled with mental illness. Way back in 1988, the Spin profile that alerted the dull mass of music fans to the new star's existence told how her mother had the teenage Michelle (or Karen Johnston, as she was then known) locked up in a mental facility. Maybe her mother was on to something, or maybe dealing with mom set up the kid for a lifetime of chaos. Either way, Shocked is now 51 and here we are.

Some people wondered if the gay rant was caused by drugs. Our eyewitness says no: “She seemed like someone who had actually gone off medication—anxious and rocking back and forth and a lot of activity and about to explode with emotional anxiety.” That's the guy's impression from talking with the singer in between sets, just before she went back on stage and blew up the house. (The fellow's name is Matt Penfield, and his account is quoted extensively in a Yahoo! post that's the best piece I've seen on the mess.) Shocked has been around many bends, and for now it looks like she has not come out okay.

Like many crazy people, Shocked can be a real pain in the ass. This was evident back in the 90s, when her career was riding higher than it is now. I don't go to a lot of shows, but I went to two of hers. One, in 1993, was wonderful. There was a big crowd, a lot of laughing and shouting, and an on-stage tribute by Shocked to her husband (“My oak, my rock, my strength,” if I recall correctly). He lumbered into view so Shocked could wrap her arms around him and drop her head on his chest.

But there was one small danger sign. To encourage the good times, she told each of us to turn to the person next to us and say, “I love you.” I didn't, and maybe I offended the young lady who happened to be next to me. But there is no reason to say, “I love you” to somebody you don't know, and one of the worst non-reasons is to further some celebrity's plans for your emotional life.

The next concert was in 1996 or '97. Another big audience, but now her mood appeared to be foul. She made a sour comment about her husband's mental outlook, and she spent a lot of time giving us commands: shake this, shake that, jump up and down, and so on. The audience went along, trying to pretend it was fun, but the performer herself didn't smile once.

I'm pretty stiff and reserved, and I don't like following orders from someone who isn't paying me, so I made only minimal efforts to cooperate. I felt bad about that until Shocked told everybody to turn around, bend down and shake their asses. Why would that be fun? It isn't abandon, it's having your boundaries stripped out by somebody who's high up on a stage with a microphone. Fuck her, she wasn't bending over and shaking her ass. She was standing there shouting orders.

Maybe she saw me toward the front of the crowd, scowling, because soon she was discoursing on those with a bad attitude. Why, in this very hall she had recently seen a George Clinton concert, and those New Yorkers (the hall was in New York) were just too cool to let on how groove-a-delic the Clinton beat actually was. Here she did an imitation: she frowned, wrapped her arms about herself and held still. Well, at that moment I was frowning, had my arms wrapped about myself and was holding still. I sometimes have to do the second two things when a crowd is packed tight, since I take up more space than most people. I'd been doing them at the concert Clinton gave in this hall a few weeks before, the same one attended by Shocked, I guess. Maybe I personally stuck in her craw or maybe she had just seen my type. Either way, she could have tried to help people have a good time, or she could reflect on how awful it is that the uncooperative exist. Guess which she chose.

I never went to another of her shows. At some point an acquaintance, an office hipster, attended one and reported back. “Michelle was in a weird mood,” he said, shaking his head. Yeah. Since then I had not heard or read her name until Sunday's fag incident. Just last week I was wondering if her song “Anchorage,” about an ex-punk girl addressing a still-current punk girl, was meant to be a letter to an old friend or to a lost lover. I also wondered if anybody would even know whom I was talking about if I mentioned the song. Now this. Still there, crazier than ever.

After the debacle, the singer released this Tweet: “Truth is leading to painful confrontation.” Michelle, the truth is you're nuts and in being nuts you act like a high-handed asshole. Get well soon and until then don't bother us.