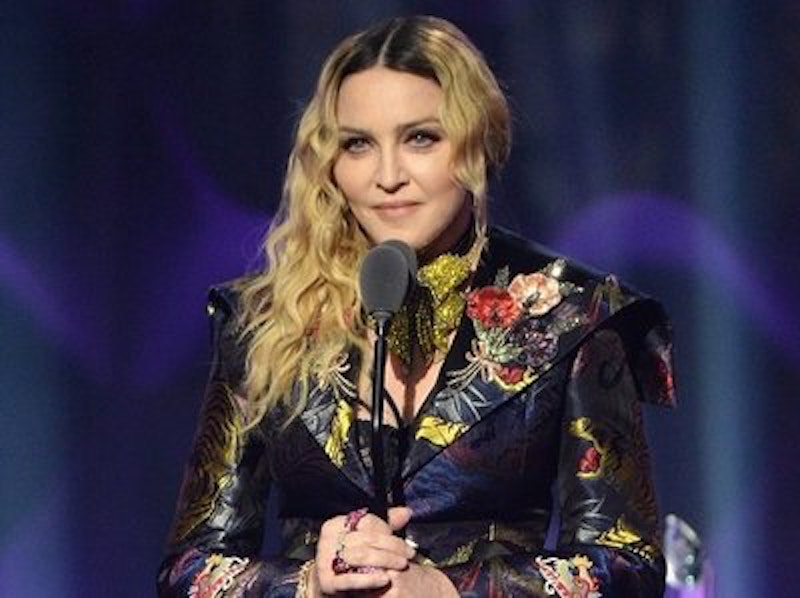 In mid-December, Madonna accepted Billboard’s Woman of the Year award. Her 10-minute acceptance speech delineated a powerful account of life as a female artist. She described a 34-year career carried out “in the face of blatant misogyny, sexism, constant bullying, and relentless abuse.” Madonna said she didn’t begin her career caring much about feminism, and only after a lifetime of lived experience did she come to appreciate its meaning.

Near the end of her talk, Madonna took a brief detour. She said, “Camille Paglia, the famous feminist writer, said that I set women back by objectifying myself sexually… I'm a different kind of feminist. I'm a bad feminist.” The comment was followed by uproarious applause and, for me, some confusion.

The problem with the jab was that it got Paglia all wrong. Not only is Paglia about as “sex-positive” as they come—pro-pornography, pro-stripping, pro-prostitution—but her argument has never been that Madonna set women back. Her core thesis has always been precisely the opposite: that Madonna sent women too far forward.

In 1991, Paglia declared Madonna “the future of feminism.” But what Paglia really meant was that Madonna had solved feminism. It was Paglia’s claim that—after the radicalism of the 1960s, the sex wars of the 70s, and the anti-pornography crusades of the 80s—the female question had finally been answered. Patriarchy and sexism had sublated to the conquering emblem of Madonna, the superlative woman and herald of feminine victory. For Paglia, Madonna diagnosed the feminist problem at the same time she provided its antidote: “Contemporary feminism cut itself off from history and bankrupted itself when it spun its puerile, paranoid fantasy of male oppressors and female sex-object victims. Woman is the dominant sex… Madonna, role model to millions of girls worldwide, has cured the ills of feminism by reasserting woman’s command of the sexual realm.”

Paglia called Madonna’s purported feminist reformation the artist’s “most enduring cultural contribution.” In this way, Paglia championed Madonna not only as a feminist icon, but also as a rival to feminism as we know it. Along the way, Paglia has called herself a feminist while indicting feminism itself. She described radical feminists as “obsessed, moralistic women” or “fanatics, zealots, fundamentalists of the new feminist religion.” She said, “[Catharine] MacKinnon is a totalitarian” with “the dull instincts and tastes of a bureaucrat.” She scoffed at Hélène Cixous and Luce Irigaray, dismissing postmodern French feminism as composed of “sloppy, third-rate thinkers.” She scorned Kate Millet and others of the second-wave, “whose middlebrow mediocrity crippled women’s studies from the start.” She mocked Carol Gilligan. She vetoed Judith Butler. The list goes on.

The point is not that feminists need, or should, agree with one another. On the contrary, the world of feminist theory has always thrived on fascinating, lively disagreements. But when it comes to Paglia, it’s not clear she’s taken the time to understand anyone’s point of view but her own. Most of the time she resorts to name-calling rather than real critique, and at a certain point the provocative contrarianism degrades into theoretical narcissism. Paglia inevitably condemns anyone—male or female, right or left—that doesn’t sign on to her self-centered and harsh brand of aesthetic hedonism. For any thinker, such dogged consistency should elicit just as much distrust as admiration.

With her continuous critique of feminism, it’s no surprise Paglia is popular. As a man, I have no business saying what feminism is, or who lives up to the word, or how it should be used. But when an outspoken academic like Paglia decries feminism as stuffy, puritanical, whining, and joyless, she confirms the worst suspicions of all those still too scared, ashamed, or misogynistic to call himself or herself a feminist in the first place. Paglia’s work invites us to consider the difference between theoretical disagreement and outright opposition. Where is the line between feminism and antifeminism? Can we, or should we, enunciate a distinction? I don’t have the answer.

We shouldn’t trash Paglia. We should read her. She’s cosmopolitan, humorous, incisive, and a wonderfully committed libertine. Particularly when she’s writing about art and culture, she’s a fun, brilliant, energetic critic, a rogue philosopher of those sweet, sensual truths at the intersection of art and sexuality. Much of her writing is worth taking seriously and some is even worth enjoying.

But when Paglia reaches for a totalized view of things—for instance, her long essay “No Law in the Arena: A Pagan Theory of Sexuality”—it’s hard to avoid the conclusion that her big arguments are facile and her worldview is limited. At her worst, she seems determined to disregard the painful struggles many women face—not as a theoretical construct, but as a matter of material reality.

The feminist scholar Rosemarie Tong argues Paglia is best termed a post-feminist. Alongside Katie Roiphe, thinkers like Paglia “insist that nowadays women are free to be whoever they want to be and to do whatever they want to do. The implication of these postfeminists is that women’s only enemy today is themselves.” Tong points out that post-feminism “can get very mean-spirited” and “looks a lot more like simple selfishness and self-absorption and a lot less like feminism.”

Paglia’s fixation on pop culture highlights the question of where Madonna fits into all this, 25 years after Paglia first started writing about her. Paglia wanted Madonna to be the mascot for a post-feminist hoax. But to be fair, it’s hard to blame her. Madonna’s historic career, her unbounded creativity, courage and outspokenness, competent versatility, radiant sexuality, all of it adds up to something we can all recognize as a feminist icon. To many, Madonna stands for the basic fact that women can do anything. So there’s nothing wrong with viewing Madonna as the pop-cultural apotheosis of female power and agency.

But affirmation of female power and agency gets lost in translation on its way to post-feminism. Paglia, the Francis Fukuyama of feminism, was premature when she declared the End of Sexual History and the Last Woman. As Tong states plainly, “This is not yet the time for postfeminism, for there are far too many vulnerable women.” Even if many women are doing better today than yesterday, the feminist question should remain focused on is why “some women are so powerful while others remain so powerless.”

After Madonna’s speech, Paglia responded with a characteristic evisceration. She closed with this sentence: “Instead of lugubrious rants and hysterical recriminations, perhaps Madonna should try a little honest self-critique.” Paglia’s real point was clear. The nerve Madonna pinched was not the part where she dropped Paglia’s name and misrepresented her views. Rather, Paglia objected to the whole thrust of Madonna’s message, an assertion that ran contrary to Paglia’s entire career thesis: women are still not living in a post-feminist world.

Need I say it? We’re not. I’m a guy. Don’t take my word for it. Just ask practically any woman you know. Sexism is still a problem in need of solving—even for a woman as powerful as Madonna.