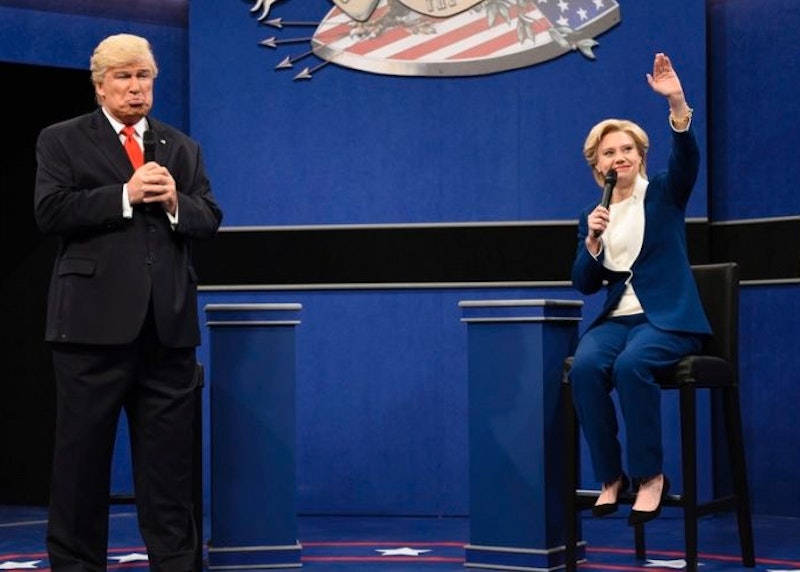 The debate sketches are done at last, and they remind us of an overlooked truth: Kate McKinnon’s Hillary Clinton ain’t Hillary. She’s Bugs Bunny as a female politician. Alec Baldwin mines the details of behavior that make Donald Trump what he is. For example, Trump’s mouth: its resemblance to an asshole has been remarked upon, and Baldwin maintains that curly little circle like a mid-face miracle of replication. Baldwin finds things that Trump does, and he does them himself. McKinnon’s Hillary does things the real Hillary would never do: winking, vamping, slouching, robot dancing. I think I saw her on top of a piano once.

The McKinnon Hil also does things that, physically, nobody could do. Standing at a debate podium, she can draw out a pair of carving knives and then make them disappear. Baldwin’s Trump doesn’t have that license: he’s on the same physical plane as the rest of us. Whereas McKinnon’s Hillary gets to bounce about on reality’s ground rules, like Bugs with the ropes to a boxing ring. She also has the Bugs habit of shifting guises. The made-up Hillary can talk like a Southern belle or a hip-hop artist (“Naw, Ah’m coo‘”). When brandishing her carving knives, she drops into the dead-eyed stare of the quietly homicidal.

But usually she’s up, manically up. Her voice is all hey-gang and carols out her tidings, like now the time for fun has arrived whether we like it or not. The real Hillary is something like that, since she’s an invincible smiler. But only something. Real Hil’s striding, forthright, rather shovel-like voice never has lilt. McKinnon’s Hil almost always has some, a hectic sort that says, “Buy this, damn it!” The voice does have flat a’s and a general harshness to its vowels, so there is that resemblance. But the touch is a mere add-on, a reminder that this is Hil. It isn’t what makes the voice funny. Real Hil, to draw another difference, often gets a look on her face that makes you think she could efficiently pull her debate opponent’s spine from out of his butthole. That side never gets a look-in during the McKinnon sketches.

Possibly the character’s founding idea is that Hillary, as somebody who’ll do anything for votes (SNL’s opinion, not necessarily mine), is therefore somebody who’ll just do anything and do it at any moment. This becomes Bugs Bunny in a pantsuit, the being who scrambles their behavior and then scrambles reality. Creatures like that are good for providing commentary, since they can operate alongside the action instead of always being a part of it. Bugs will act out his opinion of a situation, and the fake Hil will act out the writers’ opinion of real Hil’s behavior—she’s so desperate, it’s like she’d go torch-singing on a piano for us. A little after Baldwin-Trump says, “The thing-about-the… blacksss” with a note-perfect Trump delivery, McKinnon-Hil mimes reeling us in like a fly fisherman. Trump does Baldwin, McKinnon does an interpretive dance of politician Hil’s unspoken little game.

The catch is that we end up feeling a bond with her character. McKinnon’s Hil knows it’s all a put-on. So do we, at least as we’re watching a comedy show. She’s the wise guy, we’re the wise guy. Possibly the real Hil is too. She knows it’s a put-on, right? And that we know it? Which leaves Trump: droning at his podium, thinking he’s got us fooled. Never honest, always authentic, a creature trapped in his own bullshit. Of the two of them, he’s funnier, of course. But looks aren’t everything.