From the Kitchen to the Stage 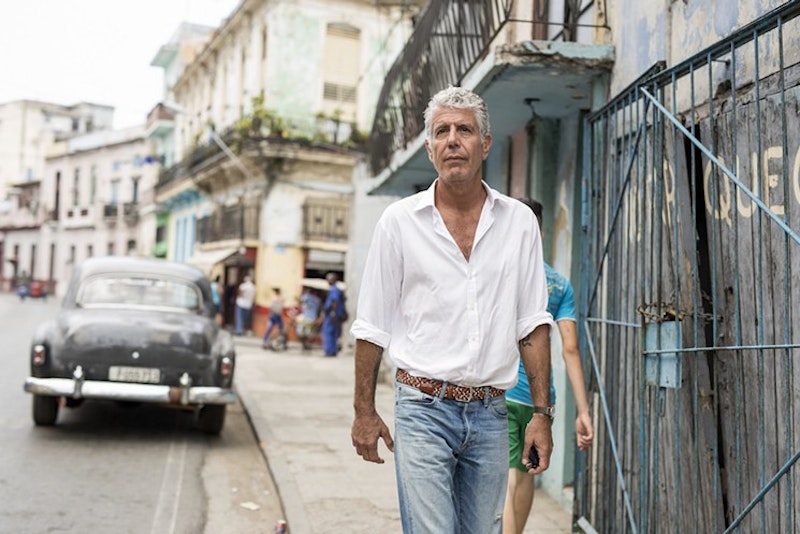 Decades ago, while in the throes of heroin addiction, Anthony Bourdain sold his record collection on the streets of New York City. On Thursday evening at the Daughters of the American Revolution Constitution Hall in Washington, D.C., the culinary celebrity/Renaissance man held a crowd of approximately 3,700 people spellbound as he performed his one-man show from his current “Hunger Tour.”

The “show” is nothing more than the ex-chef from New York prowling the stage, clad in his hipster uniform of skinny black jeans and a black t-shirt, spilling out a bunch of observations and anecdotes derived from his many years of involvement in the culinary world. This isn't an easy trick to pull off alone onstage with no props or interlocutors, but Bourdain, employing the stagecraft skills of a trained actor and drawing from a reservoir of experience, pulled it off with aplomb.

Watching the current host of CNN’s culinary travel show, Anthony Bourdain: Parts Unknown, confidently work the crowd, one might think he'd always thought that was his destiny, but until his first book, Kitchen Confidential: Adventures in the Culinary Underbelly, came out, he'd slaved away—as he explained to the audience—for years in the blue-collar environment of kitchen work, making the same product day in and day out.

The evening at Constitution Hall got off to a weird start. As Bourdain launched into a withering appraisal of Food Network star Guy Fieri, an audience member began heckling him. While it wasn't immediately clear that this wasn't some staged event—I’d never seen anyone heckled 30 seconds into a performance—when Bourdain told him to “fuck off,” all doubt was erased. Later on, right before the Q&A session, he returned to this jerk. “Not you, asshole,” he said. No sooner had he dispatched the heckler when pre-recorded fire alarm messages and flashing lights came from the stage.

The crowd consisted of “insiders”—people who’d spent many hours watching Food Network. When Bourdain mentioned Ina Garten, everyone knew he was referring to the veteran hostess of The Barefoot Contessa. He got in some good shots at Fieri, asking why the network’s top gun always ends up in a cramped kitchen asking what the secret to the chili is. The reason is that he’s not Anthony Bourdain. He allows himself to be kept in a box.

As a culinary world pundit, Bourdain stands out as a skeptic and enemy of pretension. Commenting on the gluten-free issue that's been blown so out of proportion, he sensibly observed that people claiming to have celiac disease should at least visit a doctor before going public with it. He singled out craft beer enthusiasts for some particular scorn, mentioning that some of the worst mail he gets is from the brew nerds who are appalled he can quaff something as pedestrian as Heineken. These are the people, he said, who drink flights of beer in tiny glasses at a bar while taking notes, which got a big laugh from the crowd.

That an iconoclast and known carnivore like Bourdain would look askance at vegetarians and vegans is no surprise, but what really riles him up is what he sees as their poor manners when they turn down food that's been specially prepared for them by hospitable people unaware of their culinary strictures. The former chef sees this as the epitome of rudeness. While vegetarians may cite moral reasons for their dietary choices, they can't claim Bourdain doesn't have his own moral code, which extends as far as eating unwashed warthog rectum in Namibia and fermented shark in Iceland to please his hosts.

Bourdain offered some great eating advice for travelers on this evening—always eat local he advised. If you see a food stall with no refrigeration selling meat, and a line of people in front, that's where you want to eat. It's when you decide to have that pasta Bolognese or a Caesar salad in a hotel dining room abroad that you're inviting trouble. In his travels he's seen this over and over again. Speaking of TV crew members he's seen about to do this, Bourdain evoked chuckles from the crowd when he said he doesn't warn them, choosing to let them find out the hard way.

Bourdain dragged himself out of the gutter with his words and went on to become a Renaissance man. He's a novelist and memoirist, TV star and writer, cookbook author, sometime actor, and now professional raconteur. He's a triumph of will, talent, and sheer chutzpah.