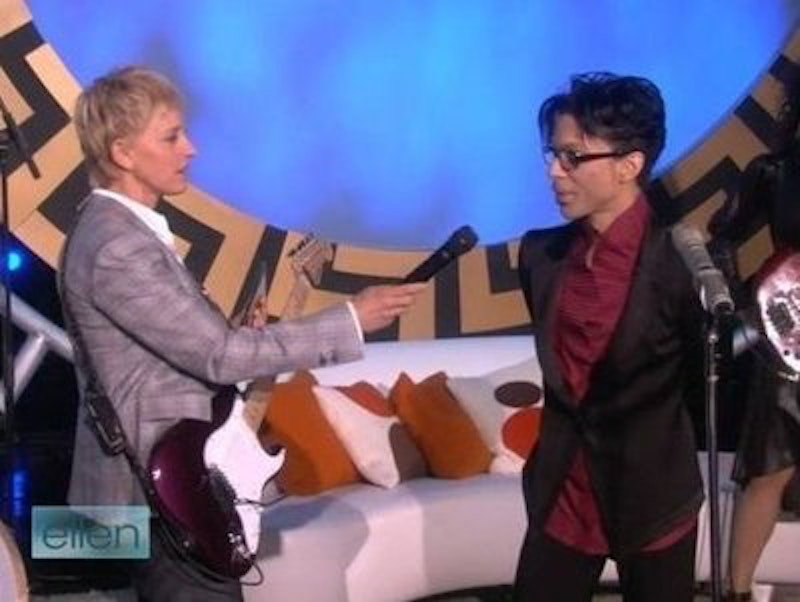 People has a two-page opening spread for CoverGirl + Olay. Both pages are lit from behind: the white light is coming for you. It bleeds through violet and glazes the face of Ellen DeGeneres, who’s wearing a pure-white collared blouse or shirt that could have been in a 1970s comedy about Heaven. “Simply Ageless.” Ellen was born the same year as Prince and now he’s dead.

“Yeah, I’m a little gay… There’s a gay James,” says the Hollywood pretty boy, his face next to the quote. Changing times, right? This is the Chatter page. One browses, items jump out. The pretty boy (all right, it’s James Franco) doesn’t mind “gay” hanging beside his feebly whiskered mouth. He’s there at the center of the page.

The other thing about Chatter is that the pictures have become bigger and the bits of text much smaller. I mean, since the old days. The top two-thirds of the page is a flock of good-size head-and-shoulder shots, with squirts of type—blue and black—fitting in here and there. The bottom of the page has more photos, but smaller, and only one is head-and-shoulders.

But everything floats against white. That’s the page: faces and dangling words, and the white behind them. Two of the head-and-shoulder photos, both of pretty girls with long hair, bleed into the page’s white; that’s just along the pictures’ lower edge, but still. Also, the hair in these two pictures is sun-struck hair: patches of glow take hold. One of the patches makes the top right of Katherine Heigl’s skull disappear. The other fades out the ends of Khloé Kardashian’s hair, which drops into nothing. It makes me nervous to have all this white coming through. Everyone looks very provisional against it.

Tucked along the right side of the page is a Q&A with petite, very petite, type. The questions are in red, so if they don’t pop they at least give you a chance of seeing them. When the eye’s flagged down, it focuses to make sense of the flea-size letters. They’re asking Wayne Newton if he’s ready for death: “Anything left on your bucket list?” (For the record, his answer starts out sounding direct, then becomes oblique: “No, not really… I don’t have any secrets people don’t already know about.”)

On the facing page, white light bleeds into the ad for Garnier Whole Blends Repairing Shampoo. Honey’s the theme, with the bottle of product stationed beside pools of honey on a table. Accordingly, the white light has to shoulder past clumps of amber light, some pale, some rich. But the white light manages.

StarTracks. Famous young men have very flat stomachs. Flat but expressively shaped: the skin sinks into knobs and grooves. Keri Russell has gray hair now. She flies it proud, a few long strands standing out against the chestnut.

Taxi Driver had its 40th anniversary. The cast got together, and there they are in a group shot, looking cheery and successful. Jodie Foster has turned into a lawyer. Cybill Shepherd is off to the side, one hand on Martin Scorsese’s shoulder so she can be included. She still has the bone structure, but it’s like her face and shoulders are twice as wide as anybody ever knew. The three men look like they’ve received extra helpings of steel-gray hair along the top of their heads, for being famous. At least the background here is black and the light’s on their faces, not sneaking up from behind. Yet black isn’t so good either.

Meadow from The Sopranos is 34 and has a son. She’s posing next to her mom so we can see how people get older. The white light is muscling through the top of the facing page, blanching the top of the scene where kids in a gymnasium sell us Lunchables with 100% Juice. A few pages later and the white light noses into the ad with the five-year-old and her shiny-haired mom, the two of them presenting a line-up of cheekbones and lush pupils to advertise jewelry. On the next to last page of the magazine, another ad for Olay. The white light creeps in at the page’s upper right corner, grazes the profile of the model, who has three delicately etched crow’s-feet. “Age Is Just a Number,” the ad says.

Ellen was born the same year as Prince and now he’s dead.