Jian Ghomeshi and You

You're complicit. Carl Wilson says so. 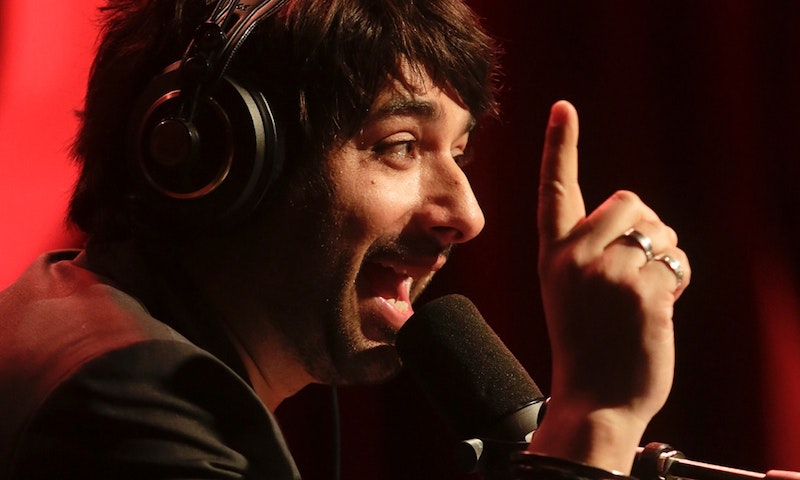 Second person is almost always a bad idea. "You are reading an essay online. You hate second person. You curse the gods and click away." It sounds stilted and hectoring, as if the author is too lazy to figure out how to manage connection or universality in any other way, and so has decided to try for it through pronoun choice. "You" can work for an odd sentence here or there, but overall, if you're not writing a choose-your-own adventure book, you (yes, you) should stick with first or third.

Carl Wilson's recent piece at Slate on Jian Ghomeshi is an illustration of everything that can go wrong with second person. Ghomeshi is the former megastar host of the Canadian public broadcasting show Q—he was fired recently amid escalating allegations that he’d harassed and violently abused multiple women. Wilson, a very successful Canadian rock and pop journalist, moved in the same circles as Ghomeshi, and appeared on Q multiple times. He'd heard rumors about Ghomeshi's behavior but said nothing; his essay is an examination of his own complicity.

Wilson is usually a skilled and insightful writer; he's widely regarded as one of the, if not the single, best pop music journalist currently working.  His use of second person in this essay is a rare but nonetheless catastrophic slip-up. An essay about allegations of abuse is a poor moment to lapse into self-conscious literary affectation.

Beyond that, it seems like Wilson is trying to make his experience into everyone's experience. We are all complicit, we all must think about abuse in our own communities. That's a reasonable point, but it becomes awfully strained in passages like the following:

As a critic and author, you have been a guest on Q a half-dozen times, most recently in early summer, to discuss a Slate piece you’d written. You enjoy doing it, and you value it professionally: It is by far the highest-profile Canadian broadcast venue that consistently engages with the kind of work you do. You think you and Jian have a good on-air rapport.

Then again, you are a man. You are well-aware that to many of the women you know, Jian is a creep.

You run into him constantly around town. Awards ceremonies, panel discussions, fashion events, charitable and cultural galas of all kinds—Jian is there….

Yes, Jian is there… and so is Carl Wilson. The second person says that this is something that could happen to you, the reader—but most readers aren't rushing from panel discussion to cocktail party, with stops for high profile media interviews in between. The "you" emphasizes the extent to which you aren't this very successful guy, Carl Wilson. It comes off as if he's bragging.

It's possible that that was the intention. Wilson may be trying to present himself in a bad light. But whether he's used the second person as a form of self-loathing or self-aggrandizement, that self still sticks out painfully. Wilson has a unique vantage on this story, but the story should not be about him.

Wilson ends his piece with a pained call to action, a suggestion that the you out there needs to step up and act. "Already, amid the racket, you have heard new whispers, about other men. You don’t want to believe them. But you do. So far, you have done nothing about it." The call to speak up in the face of evil is reasonable. But in this context, where the writer and you are one, it glosses over the main point. Ghomeshi's abuse was protected because he was powerful, and because other powerful people were invested in him. And one of those people, with a fair bit of power, was the very successful rock journalist Carl Wilson.

Wilson acknowledges his careerist impulses, and explains that he was reluctant to question Ghomeshi because he wanted to be on his show. But the universal "you" tends to obscure that this isn't just shallow social climbing—it's shallow social climbing by someone who has already climbed high up the ladder. So high, in fact, that his minor complicity can be turned instantly into cash via an international platform for his (uncharacteristically) clumsy soul-searching. There are some people, staffers on Q for example, who are far enough down in the hierarchy that Ghomeshi's fall may have actually damaged them. For Wilson, though, the story is just another chance to parley connections into copy.

I don't doubt Wilson's sincerity; I'm sure his feelings of guilt come from the heart. But guilt in these situations tends to be less important than power. Wilson was in a position to write this piece because of his place in the cultural ecosystem. The networks of friendships, favors and mutual-back-scratching which makes hierarchies function—the whole point of those networks is that they don't encompass everyone. They include Ghomeshi, and they include Wilson. If Wilson's complicit, it's precisely because he isn't you. In that context, his essay comes across not as confession, but as evasion.