Ignore all the hype about a Yakuza war in Japan. 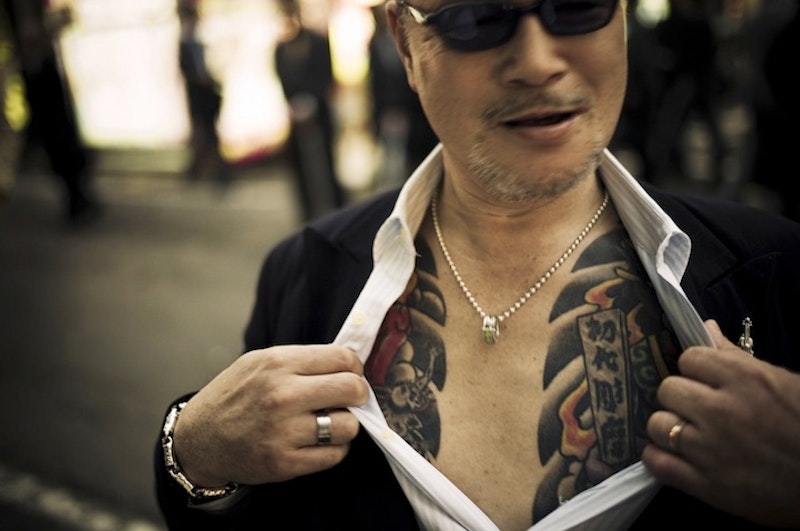 If you pay attention to the Japan-based English language media, you’ve surely heard that it’s real scary over there now. A major organized crime war is brewing, and rivers of blood could be flowing in the streets any day now. And speaking of "scary" and "organized crime," things are so bad that the yakuza (Japanese mafia) just cancelled Halloween!

Emiko Jozuka, writing for Motherboard, informs us that a yakuza outpost in the city of Kobe will break a 10-year tradition of handing out bags of candy to local children. Actually, Jozuka's not really sure why they cancelled it, but a Japanese tabloid speculated that this was the reason. The Telegraph, Daily Beast, The Guardian, Yahoo News, and International Business Times all ran similar stories.

The cancellation of Halloween in Kobe will be forgotten, however, as soon as the yakuza start dropping bombs on each other with drones and shooting with 3-D printed guns. Tokyo-based correspondent Jake Adelstein—who also wrote a Yakuza Halloween story himself—reported for VICE that the police were preparing for such innovative tactics. His source: an anonymous detective with the Hyogo Police Department. "So even if a gang has no weapons on hand, they just need the right equipment. Print, kill, melt the gun," the VICE article quotes the detective. "Those new guns will be hard to trace…. Escalation could be very fast and very bloody."

Fast and bloody escalation of violence with drones dropping bombs from the sky! Hey, I used to live in Japan back in the 1990s, when things were safe, but it looks like I made the right decision returning to the US, where all we have to deal with are frequent killings by police, daily gun deaths, and mass shootings. I’m being sarcastic, because I don't know how else to react, given the breathless reporting on this forthcoming "war," much of it coming from Adelstein, who also wrote similar articles about it for CNN, The Japan Times, and the Daily Beast. The latter’s article is headlined The Coming Yakuza War, but I'll go on the record as saying this war is not coming. Drones won't be dropping bombs from the sky either, and nobody will be killed by a 3-D printed gun.

Many media outlets have bought into the hysteria. They don't know enough about Japan to challenge a "name" journalist who's based in Tokyo for many years. USA Today jumped on the bandwagon, writing that Japan is bracing for a gangland war. Just as all those stories of the crazy things the Japanese do (e.g. "cuddle cafés," where you pay to cuddle with a stranger) give a false impression of an advanced nation and culture, so does the relentless coverage of the coming gang war, which is about fear of potential violence.

In his CNN piece, Adelstein wrote, "The possibility of the gang war reigniting frightens the general public considerably." I don't know where he got such information. Maybe from the usual "anonymous sources," like the Hyogo cop. None of the people I know who live in Japan have said such a fear existed among the public.

Atsushi Mizoguchi is a Japanese journalist who’s written a good deal about the yakuza. He was quoted in the USA Today article as saying that a Yakuza war is "unlikely." The Yamaguchi-gumi, Japan's top gang syndicate, split into two rival factions in September, but Mizoguchi doesn't foresee much more than isolated skirmishes associated with the inevitable turf battles.

The total number of yakuza-related deaths in the next year probably won't even match one of our average school shootings. It won't match the number of articles that are being written about it. If you want to report on violence in Japan, there’s only one real story there—suicide, where Japan is 60% above the world average.

I live in the most violent developed nation on earth, so stories about the potential of violence or fear of violence don't make much of an impression. It's an everyday event here, and that reality leaves little room in my mind for hypotheticals about violence in probably the safest country on earth. A country where I didn't even bother to lock my front door, even when I traveled abroad. There are many stories to report on from Japan, both good and bad, but blatant fear-mongering is best ignored. Some stories are unworthy of reporting—like a bunch of hoods deciding not to hand out some candy to local youths for an American holiday in Japan. That's not a story. Speculating on the possibility of the yakuza dropping bombs on each other from drones isn't a story. It'll never happen.