The Best of the Bret Easton Ellis Podcast

From Bryan Singer's sex parties to a stoned Kevin Smith. 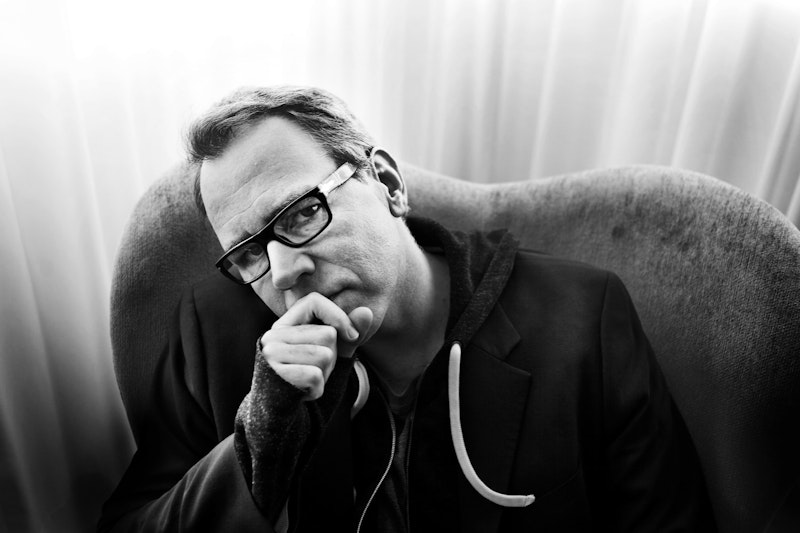 Over the past two years, Bret Easton Ellis has guided his podcast guests through a variety of pet themes: the crumbling of the monoculture, the erosion of “Empire,” the splintering of the movie-going experience, the sentimental narrative and the cult of relatability. Sometimes the resulting exchanges are revelatory; sometimes, as with the excruciating John Densmore, Carrie Brownstein/Fred Armisen, and Ira Sachs episodes, they’re downright unlistenable. Anything is possible. Conversations that should be a romp fall flat, while the ones you’d expect to be sub-appetizing drift into rather fascinating areas. (Chuck Klosterman! Who knew?) What follows are the episodes or moments that I find myself returning to as a listener, again and again.

9. Sean Baker on being critically acclaimed yet flat broke, unable to move up the sub-Hollywood ladder (8/10/15). The Tangerine director’s plight mirrors the difficulties faced by almost everyone these days—particularly in the creative arts—but the fact that Baker continuously crafts well-reviewed, incisive fare that consistently fails to elevate him is especially dispiriting. There’s also a great deal of talk in this one about the policing of speech, particularly as regards the “transgender moment.”

8. Bret recalls the dark days leading up to 9/11 (9/22/14). Panic attacks, persistent stalkers, drugs, endless paranoia—real life, not an Ellis novel, as the author himself admits in his gripping introduction to the otherwise boring Gerard Way episode. For some reason, most of the exchanges with young musicians are uniformly dull, with the exception of that time Vampire Weekend’s Ezra Koenig dropped by the PodcastOne studios to effortlessly confirm that he’s kind of an asshole.

7. Bret and True Blood creator Alan Ball discuss Bryan Singer’s infamous underage sex parties, and the times they’ve almost found themselves at the center of similar soirees (4/28/14). The off-microphone discussion before or after taping had to have been astonishingly salacious.

6. David Shields loathes pretty much everything you’ve read lately or will read next year (9/14/15). Shields, a professor and experimental author, hungers for an interactive fiction befitting the distracted urgency of right now; better yet, he’s hardly afraid to hold his tongue in a harsh, take-no-prisoners episode that is without question Ellis’ best of 2015 so far. It opens with a reading of Ellis’ review of The End of the Tour, and then takes down Philip Roth, Donna Tartt, Jonathan Franzen, and more besides. Few podcasts actually encourage me to actually buy stuff, but I copped (and enjoyed) I Think You’re Totally Wrong because Shields’ perspective unexpectedly rang a bell with me.

5. Shirley Manson’s amazing laugh (7/27/15). The Garbage frontwoman considers her childhood, music biz sliminess, and the changing of the cultural guard. And her deep, rich chuckle—which erupts with a reassuring frequency—will warm your heart on the coldest of winter nights.

4. Director Andrew Haigh (Weekend, Looking) on why his less-than-fabulous, gay-themed material can’t captivate a large audience, and why he’s okay with that (6/1/15). A colloquy on the reception of gay material through the years; the Gus Van Sant episode explores this theme, too, from a different angle.

3. An actively self-contradictory Kevin Smith commandeers the conversation as only Kevin Smith can, while stoned as fuck (1/6/13 and 1/13/13). I’m not even gonna try to call out the best bits, because it’s all spiced gravy—more than two, rambling hours of spiced gravy.

2. Director/actress Rose McGowan blasts gay Hollywood for being as opportunistically sexist as straight Hollywood (10/6/14). If you’re only going to listen to a single episode of the Ellis podcast, make it this one, where McGowan gives no quarter and asks none; it’s uncomfortable, alive, and accusatory—even the host gets some side-eye—and leave you wanting to take a hammer to your video library.

1. Jonathan Ames sidesteps multi-faceted question, spins feigned indifference to Duggar family saga into rambling comedy gold (6/29/15). Ames is, one might say, a character: someone very capable of entertaining on the page, screen, or microphone who is probably very exhausting to have any association with in real life. His appearance on Ellis’ podcast is full of artful, needless evasions that suggest he’s a guy with some deep, dark secrets. When the host brings up the mainstream media’s demonization of Josh Duggar, Ames—either out of disinterest or for some other reason—improvises a response so daft and free-associative that it may be the funniest thing I’ve heard on any podcast, ever; the answer somehow involves the L.A. freeway system and Tron. Here’s a snippet: “I am worried about the mother, though, but I imagine she’s not having anymore children, but I’m also, like, Jesus—she must be so good at it, just popping them out, all healthy? I saw a picture; look at all of them! And what does the dad do? I mean, he looks like he runs a golf pro shop. I dunno, what is the family business? Let’s not get into it, let’s move onto something else, if you want, I don’t wanna be controlling.” Ellis’ laughter is uncontrollable throughout, though it’s impossible to say whether he’s laughing at Ames, or with him.