Home on the Grange: Hangin’ with Hamilton 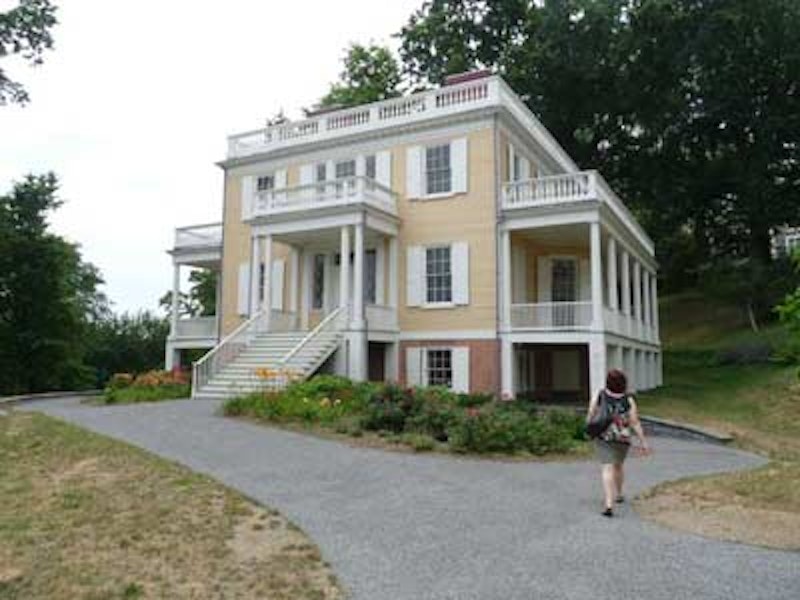 I was wandering around Hamilton Heights on an overcast and overhumid afternoon in quest of Alexander Hamilton‘s house, built in 1802, that he called The Grange in honor of his family’s ancestral house in Scotland. The word grange has its roots in the medieval Latin word for grain, granica, and has been brought through French and then English in its present form. Originally it meant granary and then widened its meaning to barn and even further, to farm. The National Grange of the Order of Patrons of Husbandry, founded in 1867, is America’s largest agricultural advocacy organization.

Hamilton was born in Charlestown, Nevis and arrived in New York at about age 18 (his date of birth is uncertain; it is either 1755 or 1757) to attend King’s College, now Columbia University, after clerking at several firms and attending the school that later became Princeton University. He was quickly swept up by the fervor for independence that was gathering steam in the colonies, and served with distinction in the revolutionary army, eventually becoming the chief of staff of George Washington and the rank of Lieutenant Colonel. He would go on to co-write the Federalist Papers that promoted the ratification of the US Constitution, and then became America's first Secretary of the Treasury; he founded the Bank of New York, the nation’s first national mint, and in a foray into publishing, the New-York Evening Post. Hamilton never lost his attachment to New York City and in 1802 built the first house he had ever owned in upper Manhattan, in what was then completely rural land, on a hilly 32-acre plot on what would become West 143rd Street west of Convent Avenue.

Over the years Hamilton had rebuffed demands for duels from those he opposed politically or thought themselves wronged, but when he assisted Aaron Burr’s victorious opponent in the NY State gubernatorial election in 1804, Burr, then the sitting Vice President, challenged Hamilton, who accommodated him. The duel took place on the morning of July 11, 1804 in Weehawken, NJ. Hamilton fired first and missed; it is unclear whether he meant to miss or not. Burr did not miss and hit Hamilton in the abdomen. Hamilton was rowed back across the Hudson where he died of his wound at a friend’s place in Greenwich Village. Burr’s name is in general disgrace, though he is thought to be misunderstood by some historians. Hamilton was buried in downtown Trinity Cemetery.

In 1889 The Grange, an early example in 1802 of what became known as the Federalist style, was acquired by St. Lukes’ Episcopal Church and moved from its original hilltop location 250 feet away to Convent Avenue just north of the church. Three of its four sides had porches that were removed during the relocation, and the Grange was hemmed in a tight fit between the church and an apartment building. Despite becoming part of the National Parks system, and its employment by St. Luke’s as a chapel, it gradually fell into genteel shabbiness. 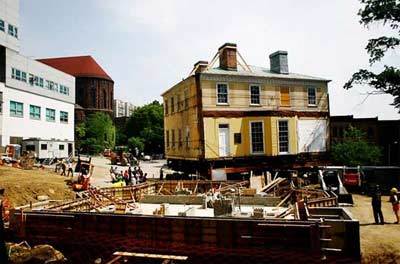 That changed beginning in June 2008 when National Parks (very gently) moved the Grange to its third location, an empty part of the northern end of St. Nicholas Park across from Hamilton Terrace. Parks then spent $14.5M to rehabilitate the building, adding new porches that had been stripped away during the first move. The Grange reopened to the public in 2011. 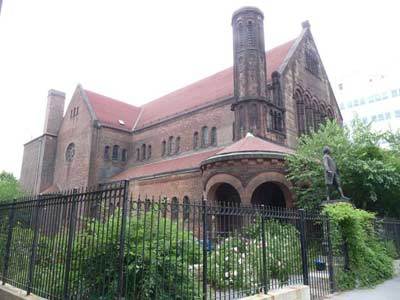 Hamilton Heights is full of historic buildings of all types. St. Lukes’ Episcopal Church, which saved the Grange in 1889, is still here in its 1892 Romanseque Revival building designed by R.H. Richardson. The parish has been in existence since 1821. It is a descendant church of St.Luke-in-the-Fields of Greenwich Village which moved uptown in 1889; its first uptown services were held in The Grange, and the new uptown building opened three years later. 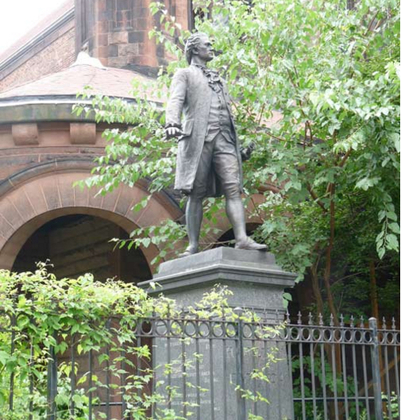 A remnant of St. Luke’s’ association with Hamilton Grange is the continued presence of William Ordway Partridge’s 1892 portrait that formerly stood in front of the Grange; the space is now used as a community garden. The work stood in front of the (now-defunct) Hamilton Club of Brooklyn at Clinton and Remsen Streets until 1936, when it was moved here. It joined three other statues of Hamilton on the island: in Central Park, on the Columbia University campus (a 1908 replica of the Partridge), and in front of the Museum of the City of New York. George Washington is the subject of 7 statues in Manhattan, Abraham Lincoln five.

Four inscriptions appear on the pedestal:

“There is not in the Constitution of the United States an element of force, of order, or of duration, which he has not powerfully contributed to introduce and caused to predominate.” –Francois Guizot

“He smote the rock of national resources and abundant steams of revenue gushed forth.” – Daniel Webster

“His rare powers entitle him to the fame of being the first intellectual product of America.” –John Stevens

“The name of Hamilton would have honored Greece in the age of Aristides.” –Fisher Ames

“The model of eloquence and the most fascinating of orators.” – Joseph Story