The Drone in My Yard 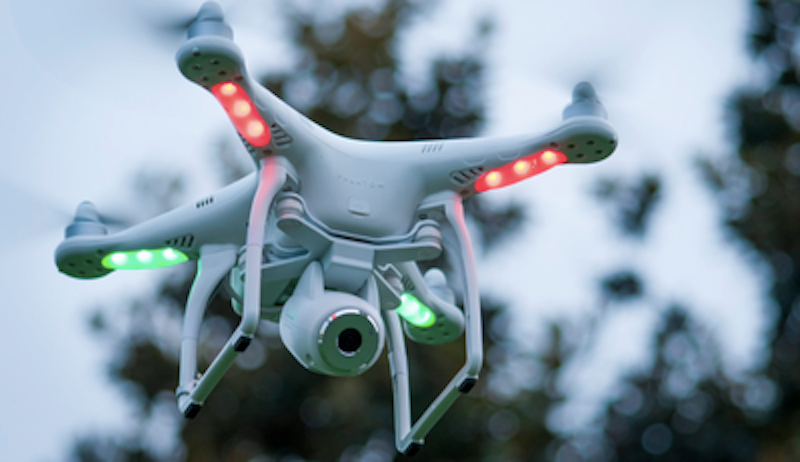 Since there was constant rain during the weeks before Christmas, we had to forego our holiday tradition of digging up a bulb tree. The ordeal would have been a messy bucket of dripping mud. Instead, we settled for a three-foot container holding a small holly bush that we bought at a local nursery. Not having used all of the strings of colored lights, we roped them around some trees outside.

Late Christmas night, I looked out my kitchen window and saw two red and blue lights alternately lighting up near my garden. I continued watching and the hair on my neck rose.

“Did you by any chance put blue and red lights near the garden?” I asked my husband. “Nope,” he replied. “I think we have a drone in our yard,” I said.

It was raining and almost midnight. I watched from the window as my husband went out with a searchlight. “Searchlight” might be an understatement. He was carrying a huge, high-powered contraption he’d found on the side of the road. I saw him examining it at close range, and then he brought the madly blinking aircraft inside. Maybe I’m paranoid after all the media hype, but I was praying it wouldn’t explode.

After investigation, we took it apart, disabling the lights. It was obviously someone’s Christmas present, but I still felt uneasy having land at my house. The idea of airspace and privacy changed last year. We live a mile from the nearest neighbor, so we don’t have many uninvited visitors. If you walked into our yard and sat down it would be trespassing, but if you land your drone on my property, is it trespassing? Timothy Ravich, an aviation lawyer, says, “Good fences make good neighbors, but we don’t build fences in the air.”

What do I, as a citizen, have just claim to? Is my sense of privacy intimately connected with expectations of property rights? Drones are clearly seen, so they’ll be making my privacy more complicated. Current privacy laws are inadequate. Recreational UAV’s (Unmanned Aerial Vehicles) don’t require FAA approval, but the agency does recommended flying within the line of sight and notifying any nearby airports. In reality, individuals, private universities, and companies can fly surveillance capable aircraft both with and without the blessing of the FAA. Worse, the idea of government drones humming around my house unnerves me and is contrary to what it means to be a free society.

Through an acquaintance in a nearby neighborhood, I found the owner of my visitor drone and he’s a nice guy; a forensic engineer and his wife bought the drone as a gift. They live about two miles from our yard and they claim the aircraft took off and they lost track of it. This was, he said, before he could attach the camera to it. He was lucky. Had I seen that, he probably wouldn’t have gotten it back.