It's Soren who best embodies the struggle inherent in a trans identity. 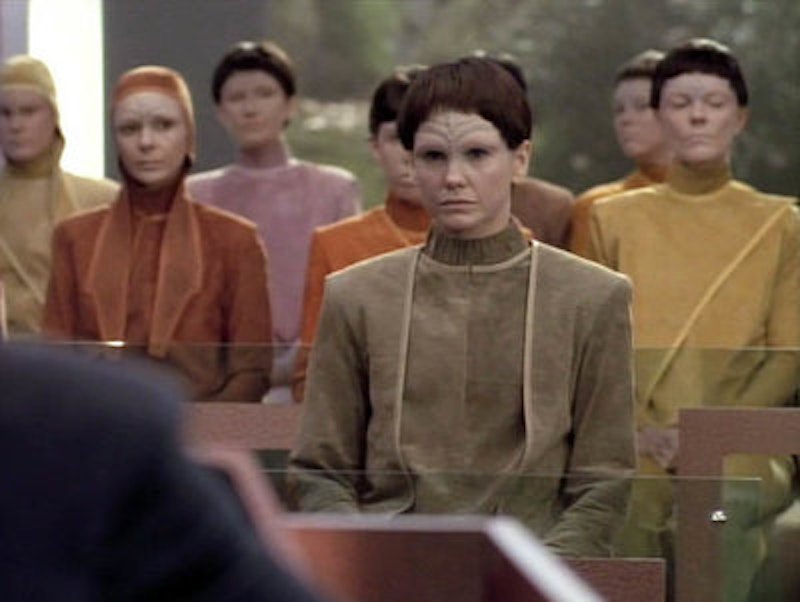 This was a pretty stressful week for me, and when I get freaked out, I tend to retreat into nerdery. Lately, that’s taken the form of watching Star Trek: The Next Generation, a show I’ve loved instinctively since I was small but of which I only developed a real familiarity in the recent past. It’s goofy and pensive, absurd and earnest; I identify with it, as much as a human can see oneself in the characteristics of a television program.

I wasn’t prepared to identify quite so strongly with episode 517, “The Outcast,” which brings the Enterprise to a planet inhabited by an androgynous species called the J’naii. While helping solve the problem of the week, Commander Riker creates one of his own: he falls rapidly in love with Soren, a pilot who attempts to explain the concept of genderless society before confessing a terrible secret—she identifies as a woman.

When “The Outcast” aired in March of 1992, transgender identities were considered a tiny subsection of the LGBTQIA umbrella. Very few books had been written on the subject; Judith Butler’s Gender Trouble had only been out for two years, and Kate Bornstein’s more radical Gender Outlaw was still two years away. As such, TNG producer Rick Berman and episode scribe Jeri Taylor had no intention of crafting a trans narrative in “The Outcast,” aiming instead for a rather on-the-nose story of gay persecution. Soren describes her society as one obsessed with maintaining its lack of gender, reacting to those who identify otherwise with ridicule, violence, and intensive “psychotectic treatments” that “correct their deviance.”

But TNG was only able to get away with this metaphor because of the time period in which it aired. Gender and sexuality are now understood to be two utterly separate traits, a truth which makes TNG’s rigid heteronormativity mildly embarrassing in retrospect. Characters enforce binary gender ideals that are even now becoming outdated. One might expect the uber-het Riker to ask Soren antiquated questions like “In a dance, who leads?” and to quote the “sugar and spice” rhyme to the uncomprehending alien, but it’s odd to see Doctor Beverly Crusher affirm that men pretend to be uninterested in women and do not wear makeup. TNG was so intent on crafting a “progressive” episode without actually ruffling any feathers that Soren both identifies with and is played by a woman (The A-Team’s Melinda Culea). Jonathan Frakes (Riker) disagreed with that decision, believing it would be truer to the narrative if he were to have had the same relationship with a male actor, but Berman had his way.

Looking back now after over 20 years of trans rights activism, it’s easier to see how “The Outcast” could’ve been a more apt treatise on gender. Many aspects of the episode fit this interpretation perfectly. The J’naii’s insistence on androgyny is an apt metaphor for the ways in which Western society enforces the gender binary; any individuals caught outside the norm face stiff consequences, general ostracism being the best-case scenario. Riker, for his part, plays the oblivious (but well-meaning) cis ally to a T, remarking early on that he’s “been trying to avoid pronouns for two days.” (In the future, “they” is still not an acceptable gender-neutral pronoun.) Cis folks, don’t wait 48 hours to work up the strength to ask how we want to be addressed. Strenuously avoiding gender is just as obvious as misgendering.

But of course, it’s Soren who best embodies the struggle inherent in a trans identity. Confessing her secret to Riker, she explains the “inclinations” she and others feel towards gender, almost precisely the language used to describe trans “gender identities” and “preferred” pronouns (whereas cis people possess simply “gender” and “pronouns”). Soren seeks out the company of other gendered J’naii for mating and relationships, which is quite often the case with trans people, who find it easier to relate both sexually and romantically to someone who understands the reality of dysphoria.

Moreover, Soren reiterates the old chestnut “I’ve always known I was different, but I didn’t know how or why until I was older.” Though this line perpetuates the not-entirely-accurate “born this way” narrative, it’s one that I feel can be more easily applied to gender than sexuality. At the very least, same-sex attraction is slightly easier to comprehend on a basic level as a child. Gender dysphoria, depending on the environment in which the child is raised, can manifest itself as a general feeling of wrongness, a sense that something within oneself is fundamentally strange in an indescribable way. I acted out frequently as a kid, forming clubs gleefully called “The Odd Squad,” reveling in They Might Be Giants and songs about dinosaurs—looking for the answer to the question: why do I feel so weird? Sexual attraction wasn’t the answer; my gender identity was.

Soren doesn’t get a happy ending. Her essence is destroyed by the J’naii treatments, but not before an impassioned speech before a stone-faced courtroom: I am female. I was born that way. It is not unnatural. We have not injured you in any way. And yet we are scorned and attacked. All of the loving things that you do with each other, that is what we do. And for that, we are called misfits, and deviants, and criminals. What right do you have to punish us?”

Then she’s led away. When Riker makes a forbidden rescue attempt, he finds she’s been murdered—not physically, but psychically, erased by the inability of her people to accept an identity that isn’t their own. This is what happens every time a trans person is forced further into the closet by their family, knowingly or not; every time pop culture thoughtlessly makes the “man in a dress” into a punchline; every time airport security publicly degrades a trans passenger; every time conversion therapy claims another life. This is the legacy of “The Outcast.”

And here I thought I identified with Star Trek before.