But they're not lying. 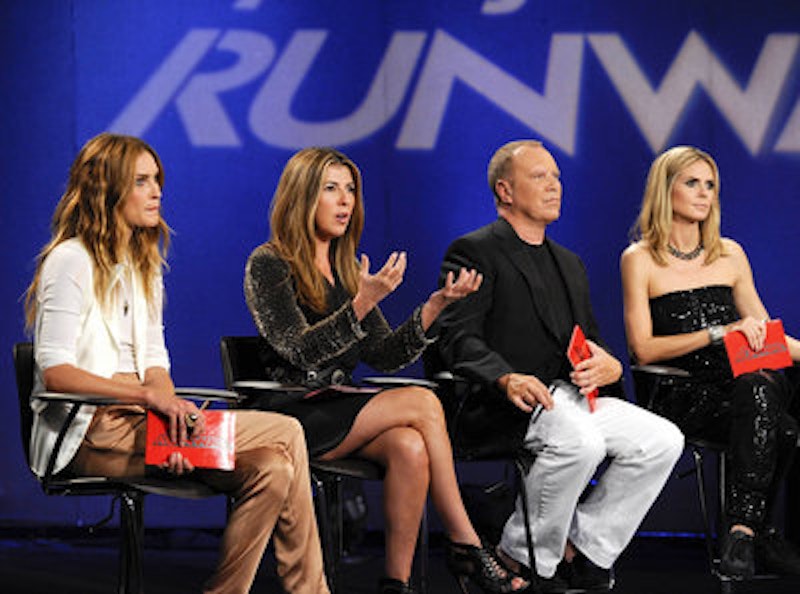 Criticism and trolling: how can you tell the difference? If you sneer at the new Star Wars movie, everyone will line up to tell you that you don't really hate the new Star Wars movie, but are just out to annoy and irritate. Say that Donovan is better than Dylan, and the world will question not only your taste, but also your integrity. To believe something so ridiculous and irritating requires, not just stupidity, but a willful effort to provoke. Within bounds, you can disagree about art. But those bounds, people think, are fairly narrow. Question the greatness of The Avengers, and you've pushed beyond the edges of human possibility. If you say Goodfellas sucks, you aren't merely wrong; you're lying.

You can see that dynamic played out with unusual directness in Tom and Lorenzo's coverage of Project Runway. I've become obsessed with PR in the last month or so, and quickly discovered Tom and Lorenzo, fashion bloggers who built their career in large part on their exhaustive Project Runway coverage. Traditionally, they watch each episode, comment on each dress shown, and then explain why the judges are wrong or (occasionally) right.

Usually I agree with Tom and Lorenzo more than with the PR judges. For instance, T&L loved this weird asymmetrical dress by Milla Jovovich from Project Runway All Stars, with one half a short skirt and one half a floor length in dramatic red and black. The judges, on the other hand, reacted like it was an insult to have slightly odd, fun clothes walk down their runway. Who would wear that, they sniffed, as if they've never seen Rihanna or Nicki Minaj wear impractical outfits on the red carpet. Then they eliminated Milla and sent her packing for what was probably the best dress on the runway. "As soon as this walked out, we both declared it as too conceptual for Project Runway," Tom and Lorenzo said. "There was no way she was going to win for this, but there was no way she should have gone home for it." Right on.

So Tom and Lorenzo's opinions often agree with mine. But they also tend to drift into a kind of critical paranoia. Why didn't the judges like Milla's dress? Well, probably because they're benighted. That's not good enough for Tom and Lorenzo. Often, when they disagree with the judges, they argue that the judges are, essentially, lying. "Y’know, if we weren’t so annoyed with them all the time, we’d almost feel a little sorry for the judges; especially Nina [Garcia, fashion editor for Marie Claire] and Michael [Kors, fashion designer]," they declare in one of many disgruntled posts about Season Nine. "Why? Because the words that keep coming out of their mouths during the judging sessions are so clearly not their opinions but the opinions that are forced onto them by producers in order to justify decisions that make no sense whatsoever."

This is T & L's constant refrain in recent years. They feel Project Runway used to be pure and focus on quality of design. Then, it moved from Bravo to Lifetime, and producers began to interfere in the judging in order to get interesting reality television personalities in the final. High profile fashion insiders are being told by reality television functionaries to say stupid things about clothes. According to T & L, Anya Ayoung-Chee won season 9 not because the judges liked her pretty clothes, but because she was Ms. Trinidad and Tobago in the Miss Universe contest, and because she only started sewing four months before the competition. Producers thought she had a good story, and so told the judges to make up reasons to like her clothes.

But if you read Tom and Lorenzo's posts (too) closely, they can come off as arbitrary as the judges they decry. For season 9, they sneer at the show because it only cares about storylines, and gave the poor-sewing Anya the win. In Season 10, they're cranky at the win by boring Dmitry Sholokhov and bemoan the way that the show has started to reward people who are excellent sewers rather than designers. And they constantly wail about how the judging has gotten inconsistent and opaque. But I've been watching the early seasons they laud, and if there's ever been a travesty more complete than Wendy Pepper getting a runway show at New York Fashion Week in season 1, I haven't seen it yet.

I might argue that Tom and Lorenzo are deliberately slagging current Project Runway out of misplaced nostalgia for old Project Runway. You could argue they hark back to the glory days as an exercise in branding. They look knowledgeable and insidery when they claim to know that the judging is rigged, or insist they have special insight into duplicitous reality show machinations. They’re the ones who liked the band back when it was great, before all the posers jumped onboard.

The truth, probably, is that Tom and Lorenzo do in fact have the silly opinions they claim to have. They dislike Anya's clothes, even though anyone can see that Anya's clothes are delightful. They believe supermodel Heidi Klum is letting someone with a tenth of her pay scale tell her to lie about her taste on national television. There's no need to postulate a conspiracy or bad faith to explain Tom and Lorenzo's opinions. People just respond to art in really contradictory and unexpected ways. That applies to critics, and critics of critics—and to critics of critics of critics for that matter. And if you disagree with me, I promise not to think you're lying. I'll just think you're wrong.