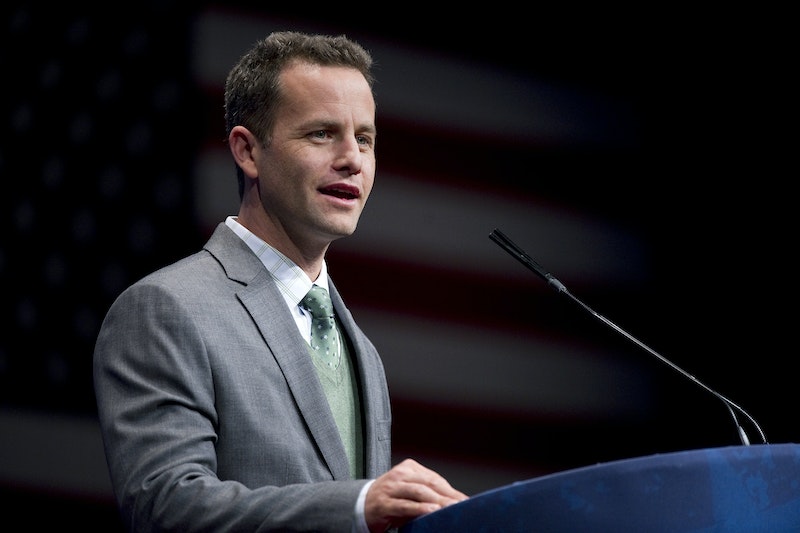 Harvey Weinstein needs to call Kirk Cameron. Cameron, famous for playing heartthrob Mike Seaver in the 1980s sitcom Growing Pains, is now an evangelical Christian. He stars in faith-based movies like Fireproof and Saving Christmas, and is about to hold his second annual “Revive Us,” a national simulcast Christian camp meeting that asks the Lord to bring healing to our confused and broken nation.

Harvey needs Kirk, after The New York Times published an investigation that found at least eight settlements paid over several decades to women who said Weinstein sexually harassed them. Actress Ashley Judd also accused Weinstein of inappropriate behavior. More women continue to come forward, one describing how Weinstein masturbated in front of her. Right now it looks like the Weinstein Company, the group Harvey and his brother founded, may be renamed—if it survives at all. This is the landmark company that produced Shakespeare in Love, Doubt, and Pulp Fiction.

Jetting in Cameron to consult and help rehabilitate the Weinstein Company would be a genius move. The Weinstein Group would instantly gain creditably with conservatives. Rather than razing the company and killing jobs and projects in the pipeline, they could focus on what Cameron has been doing for years—producing small-budget family-friendly movies that make a big profit. Fireproof made over $30 million on a $6 million budget. Cameron has been married for 25 years and has six children, four of whom were adopted. The casting couch would be prayed over, exorcized, and burned.

Harvey and Kirk—a beautiful shotgun marriage between Hollywood and America.

I can vouch that Cameron is a good guy. I interviewed the actor around this time last year, when he was about to hold the first “Revive Us.” At the time the interview was supposed to start I got a call from Cameron’s PR person. He’d been trying to call for several minutes, but just got a recording saying the call could not go through. I checked the number and we tied again. No dice. I panicked a little, and then told the PR person that I was going to have to call Cameron directly. This is an awkward situation for a lot of well-known actors; they’re understandably reluctant to give their number out, feeling it might result in harassment. It’s a particular concern for a man of faith like Cameron, who’s reviled among the secular left.

Cameron was great about it. I got through to him and apologized. I told him I felt embarrassed. Cameron could’ve become irritated or blasted me—pulled a Harvey Weinstein—but he was a gentleman. We were quickly talking about “Revive Us,” faith, my Catholicism, and the fact that he’s named after James Tiberius Kirk of the starship Enterprise. In short, when no one is looking, Cameron is a real Christian.

Cameron also said something that now applies directly to Weinstein. He said that America might be facing “a Red Sea moment.” It’s a phrase inspired by the biblical story of Moses parting the Red Sea. “I visit churches all over the country teaching marriage conferences,” Cameron said, “and I hear it all the time from couples. Moms are concerned about the future for their children. Dads know that something is broken, that the nation’s on the wrong track. And they wonder if America is frankly in the last days of being a great nation. And they’re very concerned. And I want to say to them, I think there’s never been a more exciting time in America to be a Christian—to be a person of deep faith in God. Because it’s when hope seems lost that God parts the waters, right? That’s when he splits the Red Sea. I think this could be a Red Sea moment for you, for me, for us in our American story.”

He continued, “I challenged the smartest, wisest, most faithful friends I have to answer the question: At times like this, what can we do? Their answers literally inspired me. They refreshed my mind, they revived my heart, they filled me with hope and optimism. And I said, I’ve got to get this out to other people.”

Cameron needs to get that message to Harvey Weinstein, and the latter needs to receive it. It wouldn’t be a bad idea to bring Quentin Tarantino with him.