"Take a look at that friend passed out in a puddle of beer. That same guy is also going to eventually help bring another life into this world." 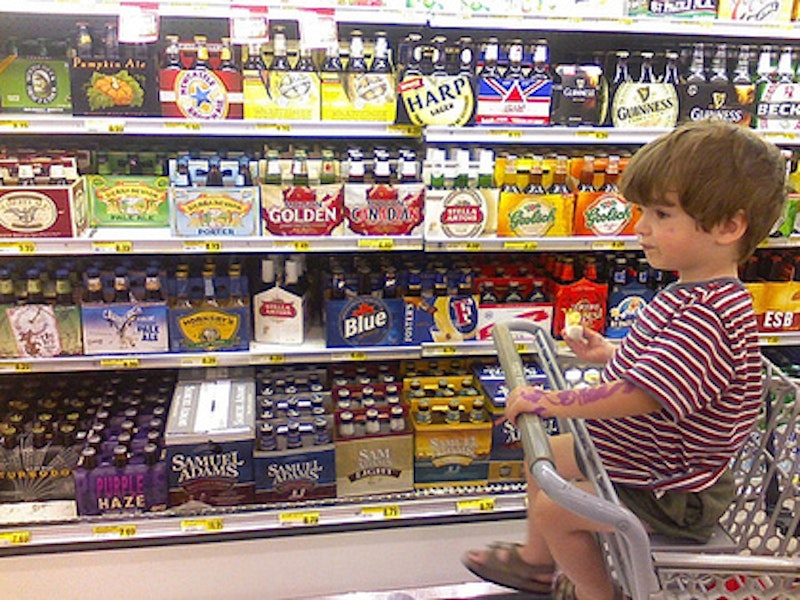 If my 20s was the decade of weddings, it appears this following decade is destined babies. After watching most of my good friends tie the knot over the last 10 years or so-some right out of college and others a bit later-the wave of children has begun.

The first really good friend to become a father was also one of my first buddies to get married. After two years of partnering with me in chasing skirts and punishing our livers, Nick found one particular skirt (or more accurately, one particular girl in the skirt) he liked more than the others and just like that, he was done. He and Suzanne started dating during the fall of our third year of college and had the clarity and maturity to recognize that they had found "the one" in each other.

They were married about 15 months after graduation, making them the inaugural couple from our circle of friends to take the plunge. Theirs was a wedding I'll never forget. Not only was it one of the first weddings of a true peer, it was also a reunion of sorts for all our friends who traveled from wherever they had settled after college. Still actively chasing skirts and by no means doing my liver any favors, I spent the beginning of the weekend pretending (wishing, really) that I was still in college. Soon, though, it was time for the main event, so we got ourselves dressed and headed to the church.

As I stood there smirking at various friends in the pews and making wisecracks under my breath to the other groomsmen, my attention was suddenly drawn to the back of the church and something instinctively told me that the time for joking had ended. There stood Suzanne in her wedding dress, looking as beautiful as I'd ever seen her. As I turned toward Nick, I saw that tears had come to his eyes, and pretty soon I was right there with him. How the seriousness of marriage had not really dawned on me until that moment I don't know, but all of a sudden I found myself awestruck at what these friends were about to do.

For the first time, I really listened to the substance of the wedding ceremony. As Nick and Suzanne exchanged their vows, I was swept by a fresh wave of amazement at the enormity of the commitment being made. Looking at them again and seeing their trembling hands, I realized that the seriousness of all of this was by no means lost on them either. When the minister pronounced them "husband and wife," I was filled with pride for my friends, so very happy for them, and simultaneously quite aware of how ill-prepared I was for what they had just done.

Two and half years ago, Nick called. Since his wedding, I'd seen many more friends marry, and by now, I was engaged too. Something in the tone of his voice made it immediately clear to me that he wasn't calling to talk sports, and I was right. "Hey buddy," he said with a strange solemnity, "do you have a minute? I just wanted you to be one of the first to know that Suzanne is pregnant!" I was sincerely excited for them both and, very aware of how much they looked forward to parenthood, thrilled that they were about to start another chapter in their lives.

Only after we had hung up did I really begin to consider the news. "Nick is going to be a father?" I asked myself. "Another human being is going to be dependent on Nick for food, shelter and clothing?" After all, this was a guy who had survived the first years of college on macaroni & cheese and Milwaukee's Best. The house we had lived in with three other friends our last two years of college was condemned a few years ago. And wait, wasn't this the same guy who in college considered his boxer shorts "clean" as long as he hadn't worn them the previous day (regardless of whether or not they had actually been washed or not)? This guy was going to be a father?

About seven months later, my question was definitively answered with the birth of Madeline. During the course of Suzanne's pregnancy, I'd had the opportunity to see them a few times. With each visit, I realized that I was having another experience like the one I'd had at their wedding. Initially it was fun to joke with our other friends about some of the stunts that Nick had pulled years ago, and to then juxtapose those with his impending fatherhood. But like Suzanne appearing at the back of the church nearly eight years ago, when I received word that Madeline had been born, the seriousness of the moment was evident.

There was also joy again in realizing the journey on which my friends were embarking, and the realization that these two great individuals had produced another life was surreal but also terrific. Yet also like their wedding, I questioned my own readiness to become a parent. Would I be ready for such a significant and utterly life-altering event? My wife (fiancée then) and I certainly hope to have children, and of course had discussed the subject. But even when talking about it with the woman I was going to marry, there was still the relative safety offered by the hypothetical nature of the conversation. Nick and Suzanne, on the other hand, were far beyond the hypothetical.

It's been over three years since Madeline's birth, and in that time, several more of my closest friends have either had babies or are expecting one soon. With each birth, I witness anew the miracle of parenthood. I watch a different friend's life turn upside down. And without exception, every friend of mine who has become a parent has told me that having a child was absolutely the best thing that has ever happened to them. Watching these friends develop into parents has also been amazing for me, and like watching more and more friends head to the altar in my 20s, I have become increasingly comfortable with my ability to do the same when the time comes.

So, to those of who are still in college, take a look at that friend passed out in a puddle of beer. As you look at him, think about the fact that not only is some girl going to choose to spend the rest of her life with him, that same guy is also going to eventually help bring another life into this world, and be responsible for that baby's care. Hard to believe, isn't it? And when your friends start dropping like flies as they meet the girl or boy of their dreams, what might initially be very strange will ultimately become some of the most wonderful memories of your life.