Even though we have more access to news than ever, some pithy infotainment can be a wonderful thing. Enter Matt Lauer. 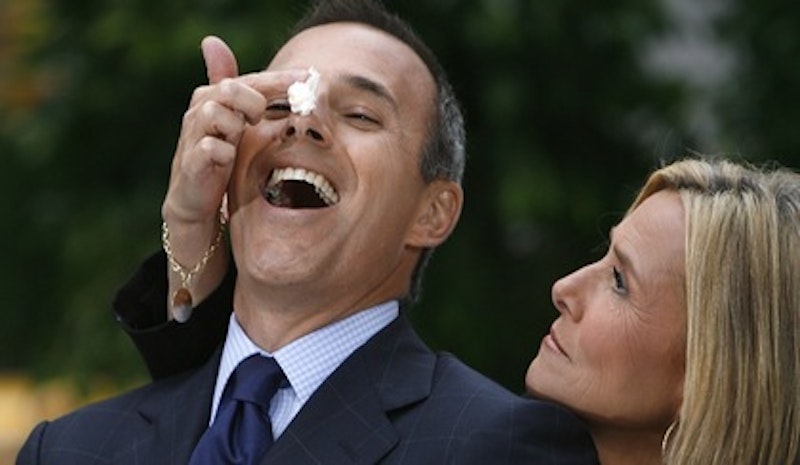 The Today Show isn't great. Hell, it's not even good. Yet I watch it every morning. Perhaps it's my dreariness or the lack of quality breakfast news shows out there (Good Morning America? Please). As an avid news gatherer, I love to hear the NBC horns as the three big stories of the day are revealed. It's just so grand. Whenever a big story breaks, I eagerly await Today's take on it. What will the lead story be? What kind of inflection will the anchors give? And, most importantly, how will Matt Lauer react?

Matt Lauer is the most affable and charming newsman on television. He can go from being humorous to stone cold serious and somber in the blink of an eye. Earlier this year, Today did a piece on two families whose daughters were both in a horrible car accident. One of the family's daughters was mistakenly thought to be the other family's daughter. Chaos ensued. The family whose real daughter was actually dead unknowingly took care of and waited on the other family's daughter while she was still in a coma. As she got better, it became increasingly clear something was wrong, until they finally realized what had happened. Matt Lauer interviewed both families and handled that situation with grace. I've read and heard stories about "Uncle" Walter Cronkite on the CBS evening news more than a generation ago and how he soothed a nation; that's Lauer to me.

On a much lighter note (a favorite phrase of both Lauer's and co-anchor Meredith Vieira), last week Today had an interview with Barack Obama, the day before the North Carolina and Indiana primaries. Obama, who obviously had a long weekend (in Lauer's words), inadvertently called Matt "Tim" three times over the course of the segment. This was attributed to Obama's appearance on Tim Russert's Meet the Press the previous morning, where the elite media's favorite inquisitor put him under the microscope. After the third time Obama blew his name, Lauer made a quick but gentle correction, letting the Senator know he had made the mistake. It's a fair bet that MSNBC's blathering Chris Matthews or Keith Olbermann wouldn't be nearly so charitable.

And yet, I find myself asking this same question: why the hell would I be so religious in watching Today every morning? I'm clearly not in the program's target demographic, yet I've been a steady viewer for three years now. Perhaps it's because the show is simple, and generally optimistic. Although I like watching and reading the news from a variety of sources and mediums, Today is always the crutch to fall on when I want the gist or the summary of news. It's largely bipartisan, although the anchors, excluding my boy M.L., are too robotic to express any original thought or opinion whatsoever.

I like drama, and love to watch history unfold before my eyes. This could explain why my two favorite news sources are The Drudge Report and Today: both these outlets very clearly value style over substance, headlines over content. And by and large, the headlines are my favorite part. Who doesn't love to see a big, bold banner, declaring some major event, whether it's an earthquake in China or a celebrity's sudden death? It's incredibly exciting. I watch Today waiting for those times: those moments when I feel like I'm watching history unfold before my eyes. Matt Lauer can't be so even-handed and re-assuring every day-and colleagues Vieira, David "Stretch" Gregory and Al Roker never are-but when he's at his best, it makes up for all the stories about American Idol, Britney Spears, and water-skiing squirrels. Now that's infotainment.