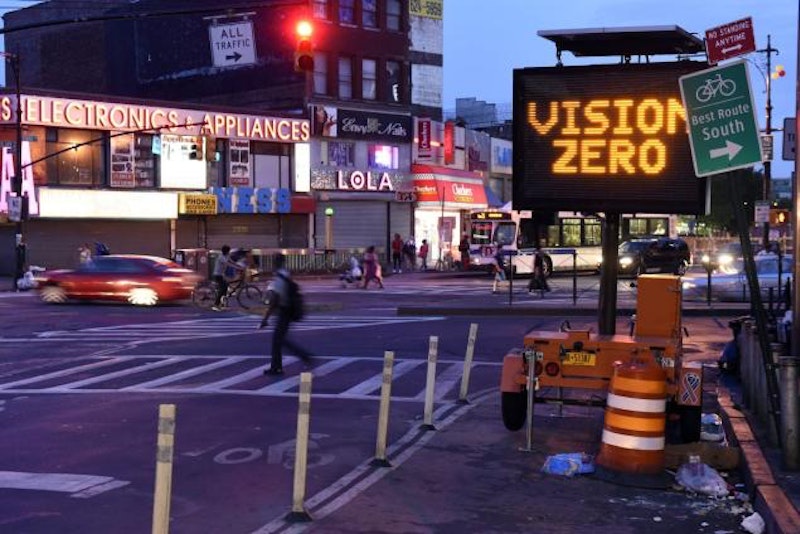 As if there weren’t enough things to hate, many Manhattanites were confronted in recent days by the downright un-American sight of an NYPD van blaring continually-repeated public safety announcements of the blandest kind, in a flat and droning female voice, with the Orwellian slogan VISION ZERO pasted on the side of the van for the occasion.

Sure enough, it turns out to be part of a Sweden-spawned, EU- and UN-backed global initiative that has among its goals getting citizens and city planners to stop seeing physical mobility, money, and the calculating of trade-offs as more important for urban space than health and safety. And they wonder why people form militias.

The vague but accurate sense of plans being made behind our backs is also why we end up with things like Alaska-secession-sympathizer Sarah Palin endorsing nationalist Donald Trump (and claiming, for good measure, that she never technically endorsed John McCain in 2008, surely one of the strangest remarks in the history of former vice presidential candidates).

But of course, the people to whom projects like VISION ZERO appeal—socialists like New York mayor De Blasio or former Brooklynite and potential future president Bernie Sanders—are not in any useful way counter-balanced by the Trumps and Palins of the world. They’re all just different flavors of authoritarianism. Furthermore, the forces against which the authoritarians rail, such as barbaric street gangs or terrorists, aren’t really enemies of the authoritarians either. Barbarians give the authoritarians something with which to contrast themselves, a menace to combat in the name of a grateful public. The state and the savages are codependent, and you’re stuck in the middle.

Between the omnipresent security cameras and drones former mayor Michael Bloomberg loves, Sandinista De Blasio’s new Euro soundtrucks, Sanders’ bank-destroying schemes, and Trump’s anti-trade and anti-immigrant bombast, we’re well on the way to living in a police state built by New Yorkers, complete with occasional praise for NSA surveillance or cop unions from our minuscule handful of local conservatives. And don’t dream it will even be a smoothly-running police state. The trains will not run on time, and even as I write this, news reports are multiplying about the U.S.’s drones being lost by the dozen to insoluble malfunctions or the hands of ISIS.

Not that the West Coast is innocent, with upbeat articles reporting the CIA-tied company Palantir practically taking over California tech neighborhoods, its disingenuously mellow and nerdy Lord of the Rings slogan “Save the Shire” emblazoned everywhere. Of course, hobbit creator J.R.R. Tolkien was a traditionalist anti-fascist and, by the end, an anarchist. Surveillance and militarized mechanization were exactly the aspects of modernization he despised. These are the works of orcs, not hobbits.

I also can’t imagine Tolkien (or for that matter Frodo) would have been pleased about, say, a friend of a friend of mine being forced by the TSA to drink her own bottled breast milk to prove what sort of fluid it was before boarding a plane (though I suppose this is less abusive than making women sample the milk straight from the breast while waiting on line). Too, there was a massive, military-style security guard presence (with machine guns and all) at the Golden Globes, frightening some who attended.

In its blundering way, the government obviously hopes gradually to make all this seem normal. You know the politicians mentioned above would enjoy running a heavily-armed police state even if they acted reluctant about it, including Hillary Clinton (whose Foundation was basically bribed in order to get the State Department to okay arms sales around the world). Marco Rubio would too. Cruz, the opportunist with dashes of libertarian thought now and then, might at least be selective in his mania and kill-rages: Front Toward Enemy, as it says on Claymore mines.

But in tomorrow’s column: a relaxing look at Donny and Marie Osmond, ladies and gentlemen.