Costumes From a Galaxy Far, Far Away

An interview with Sarah Bailey, commanding officer for Connecticut chapter of the 501st Legion. 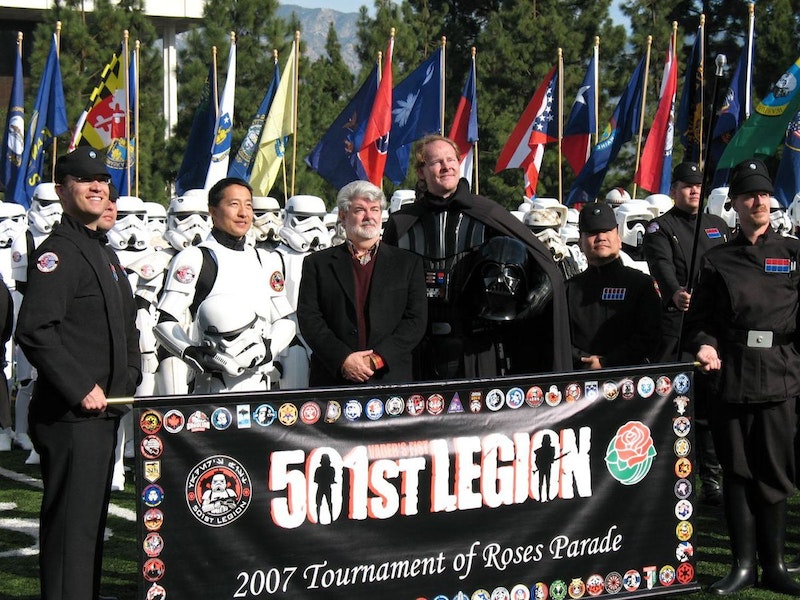 The 501st Legion is a fan organization dedicated to wearing screen-accurate costumes from the Star Wars universe. I recently encountered members of this group's Connecticut Garrison while attending A New A Hope In Concert. Curious to learn more about the people involved, I emailed Sarah Bailey, commanding officer of the state chapter. She discussed the origins of her fandom, how she puts together costumes, and much more.

SPLICE TODAY: How did you become a Star Wars fan?

SARAH BAILEY: I was gifted the Star Wars trilogy VHS box set when I was probably five or six years old. I played those until the tape was worn out! So I started out early with knowledge of the films. It ended up being sort of a background interest for a long time until I got involved with a West End Games RPG group. I’d played a stormtrooper character for a long while and really enjoyed it. When I eventually read the book Allegiance by Timothy Zahn, I was hooked on the bad guys. I'm not a super fan by any means, but it did get me researching more about the old canon lore of them, and eventually into the world of their costume design. There's a fantastic website called StarWarsHelmets.com that has a lot of cool lineage information and that was one of my biggest inspirations.

ST: How did you get involved with the Connecticut 501st Garrison?

SB: When I was in England for the first time I encountered a member of the UK Garrison in armor at one of their events. I was blown away with how accurate and downright cool it looked. I knew I had to eventually make one. A few years later, I was in a financial position to make an investment into costuming, and it's been a hobby ever since.

ST: What kind of costume do you wear?

SB: I currently have six costumes, and am nearly finished with my seventh. The first costume I made was the stormtrooper, A New Hope “stunt” style. It has a certain appeal of the classic evil Empire and I think will always be my favorite for that. I also have two variants on the stormtrooper; an Empire Strikes Back variant, and a heavy weapons trooper variant from the classic Battlefront 2 video game. The costume I wear the most however is my line officer costume. I love how crisp and form fitting it is, and it lets me play up the snide-but-posh attitude for photo ops. I think it also helps the kids feel more comfortable to have a costumer present that has a smiling face and isn't behind a helmet, and I've more than a couple times helped talk a little one into not fearing the stormtroopers and going to high-five them. I have an Admiral Daala variant that I'll wear occasionally as well, but my normal configuration is the Empire Strikes Back character Lieutenant Sheckil.

The most comfortable costume by far that I have is the Bounty Hunter Dengar. Everything is loose-fitting and comfortable. Unfortunately he's very much a background character in the movies, so most people have no idea who he is when I costume as him. I usually just reserve him for convention wear. The last costume, which is almost completed, is another bounty hunter named Jodo Kast. Bonus points if you know who he is without Googling. This one has really been a marathon of custom prop-making, original research, painting, detail work, and patience, but after two years the finish line is in sight. I'm hoping to be done by Christmas.

ST: How did you make them?

SB: Every costume is very different in process. For stormtroopers there are several sellers of kits that are either extremely accurate fan sculpts or direct-lineage casts from the movie pieces. The armor itself is vacuum formed ABS plastic, which has to be trimmed, cut to size, sanded, assembled, and strapped to fit the wearer correctly.

For the officers, folks either sew the costume themselves, or purchase one created from several skilled makers. The one I had is a commission from a fantastically skilled pair of tailors in the UK who custom fit it—it's almost like getting a custom suit, and costs about as much. The boots are sourced from equestrian riders, and the rank badges are made from electronic push buttons attached to aluminum. The little cylinders that sit in the pockets are actually radiation dosimeters.

For Dengar, it was about half and half. The hard parts were repaints of stormtrooper parts from kit makers, while the balaclava, head wrap, belt, jumpsuit, and boots were all handmade. For Jodo, it's a heavily modified Boba Fett helmet, a lot of custom leatherwork and sewing, sculpting, casting... and headaches! Those are just the ones I have experience with though. If you're lucky and make a popular costume, a lot of the harder aspects have probably already been figured out. Some of the more complex costumes like Boba Fett or Darth Vader involve hundreds of hours of work and often thousands of dollars in materials.

ST: What do your duties entail, as commanding officer of the group?

SB: I oversee the day-to-day operations of the group, occasionally taking point with event coordination or new member approval. I have a fantastic command team that helps run the garrison and I'm very lucky to say that most of the time they don't need much extra help from me. Besides directing them when they have questions or concerns, I spend a lot of time promoting the garrison, setting up new member outreach programs, helping others with costuming questions and hands-on builds, and any of the contact requirements with Lucasfilms throughout the year. I also handle the majority of the communication and coordination between the local garrisons—so when we have cross events with the New England Garrison or the Empire City Garrison, etc. The position itself is elected, so every year we run an election and any member is eligible to be nominated. That way fresh ideas always flow in.

ST: What's the appeal of the organization for you?

SB: The Legion's motto is "Bad Guys Doing Good" and I think that summarizes what our events are like. Being able to have fun with my costuming hobby—while supporting fundraisers, positively affecting the local community, bringing moral support to children in need, and putting smiles on faces—is a wonderful feeling.