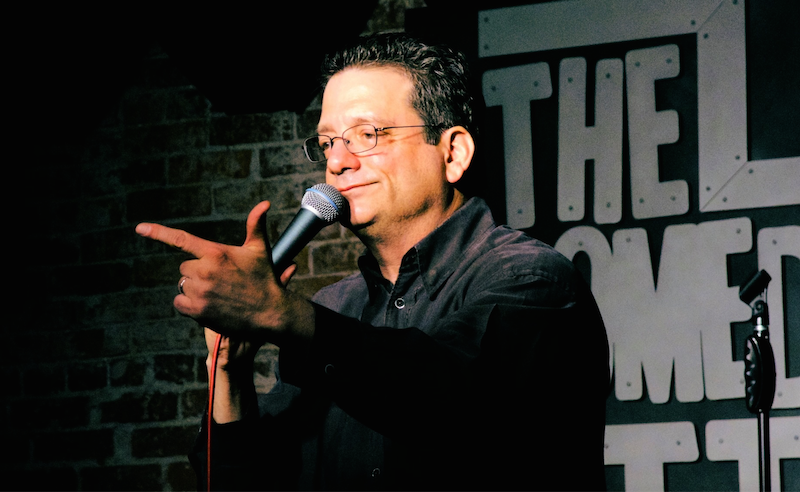 People abuse Twitter in a number of ways. Some use it to attack people viciously, knowing they won't face any consequences. Others find it a convenient conduit for their personal demons. Combine both of these and it looks something like comedian/actor Andy Kindler's Twitter timeline, a daily public diary of one man’s obsessions. It's call-out culture at its worst. (I’ve written about Kindler previously.)

The L.A.-based comic’s high-strung, neurotic personality leads him into unhealthy fixations on certain individuals, who he then tweets about incessantly. His longtime obsession (since 2012) with far more successful fellow comic and actor Ricky Gervais has come to a head. A Twitter analysis indicates that he tweets to Gervais more than any other Twitter user by a wide margin. This is not a feud. Gervais doesn't ever engage him.

Kindler calls the British comic the most degrading things on Twitter: “narcissistic simpleton,” “hate parrot,” and “bigot." Those are fighting words if said in person, but Kindler, a sexagenarian, is no fighter, except when he's at his keyboard, enjoying the safety the Internet provides him. It's cowardly. It's also weird when you do it for years and the guy never responds.

This is a grown man, not some irate teenage gamer pissed off about feminists influencing video game culture. The sheer volume of the invective (you can find it by typing “from:andykindler @rickygervais since:2012-01-01 until:2017-04-20” into the Twitter search field) represents a stunning investment of emotional energy. Gervais recently tweeted that he was doing an arena show, which is what people playing arena shows do. “Why don't you just tell us your net worth,” Kindler responded, as if Gervais should tweet only his appearances in the tiny rooms in the Midwest that Kindler plays. In countless similar tweets, Kindler comes across as a petty bully who just can't stop thinking about one person.

Sam Seder recently devoted a lazy segment on his YouTube show, Majority Report, to Kindler discussing his Gervais compulsions. It was a waste of time, with the host lobbing softball questions at his buddy for some cheap yucks. Seder even brought up my name, because I've been re-tweeting Kindler’s very early morning tweets lately to illustrate the depth of his mania. “Chris Beck,” the host said, “does not realize that the [Twitter] time setting shows him the local time, not the time in California. He thinks you're up at 3 a.m. tweeting about Ricky Gervais when it's probably like 10 p.m.” Probably 10? Wrong. The Kindler tweet in question says he sent it at 5:57 a.m. If that's my local time here on the east coast, then it went out at 2:57 a.m. L.A. time. That's awfully late to be calling someone a bigot.

Kindler told Seder that I hate him. I don't. I just think he's an asshole. And I'm not the guy who’s spent half a decade daily bad-mouthing someone whose success I envy. When people behave irresponsibly on Twitter, it can have grave consequences.

Kindler would like to ruin Gervais, as his tweet calling him a New Atheist indicates. New Atheists, he continued, hurt people and hate individual Muslims. What he's done is assign Gervais to a group that the man doesn’t identify with, and then makes the false claim that people in that group hurt people and hate individual Muslim. Kindler has zero evidence to support this either, which doesn’t bother him. Nobody who reads all of Kindler’s tweets to Gervais could possibly think he's mentally sound, but Twitter does nothing to end his daily character assassination.