An interview with the USA’s newest paramilitary duo, demon hunters Isaac and Scadian. 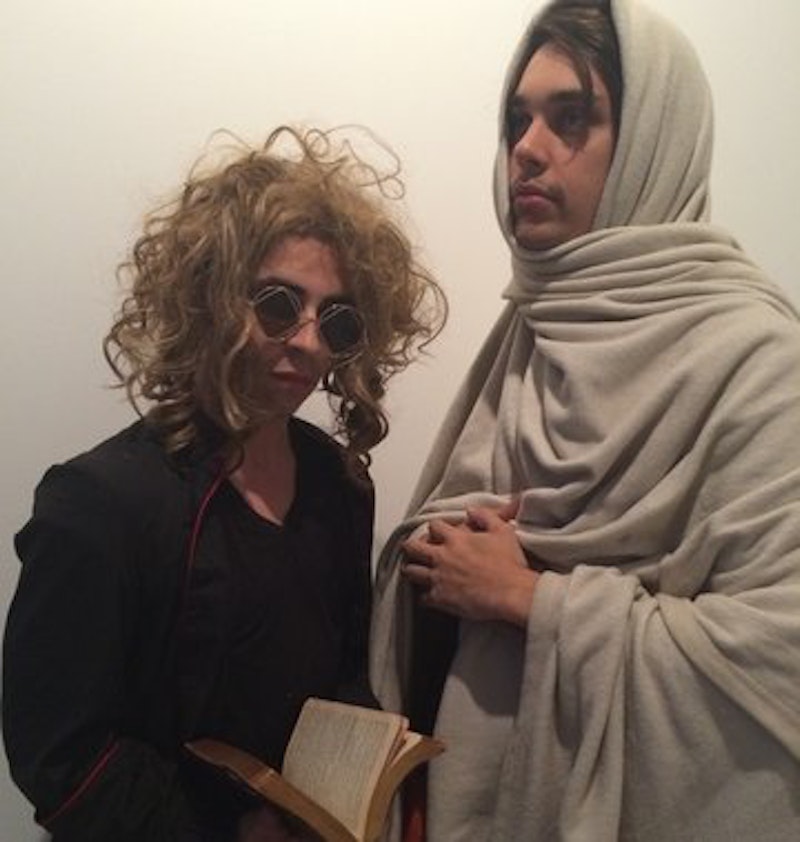 Darkness. Flash floods and thunderstorms all week, blood red skies. Visions of other realms. Their flight to Baltimore was cancelled, but no matter: Isaac and Scadian simply teleported from the world of Sanctuary and were only 45 minutes late to our interview. They look rough: armor chipped and dull, faces long, dried blood rusting their swords and bows. Isaac accidentally puts a cigarette out on our dog and sits down on the couch. Scadian demands a bottle of sparkling water and three grapes before we can commence. Such demands aren’t a bother—the dynamic duo of the Kingdom of Khanduras is in high demand and have refused interviews with Good Morning America, The Today Show, Dateline, Meet the Press, Ellen, Howard Stern, Rachel Maddow, and Hannity. Keep in mind they’ve been banned for life from The O’Reilly Factor and Live with Kelly & Michael, where Isaac paralyzed Kelly Ripa from the neck down while attempting to harvest her body for scrap metal and gems, and Scadian branded his name with a hot iron onto Michael Strahan’s ass. The duo is nothing less than a media sensation, and the Obama administration is reportedly in talks with them to be contracted out to resolve the conflict in Israel and Palestine. Could they be the saviors in our realm as well as their own?

Splice Today: How is your kingdom holding up?

Scadian: The world is falling apart right before our eyes. We are the Nephalem. We have no choice but to save the world from the dark power of the evil lord of terror Diablo.

ST: What is your dynamic as a team?

Isaac: We fight a lot. But we’re best friends, we love each other.

Scadian: [pensive] He’s always salvaging items for materials that I could use. He grabs everything and doesn’t let me get anything. I’m slow, but my wizard powers are great. I can turn into arcane energy and destroy everything.

ST: Would you take a dagger for each other?

ST: Are you worried about how people perceive you in our realm?

Scadian: Well, it’s not that I love it, I’m quite proud of it. Love is something more that I’d cast upon the use of my magic. I do love my magic. I don’t think magic is a tangible thing; it’s very ephemeral. It’s gone one moment and back the next, but you know you can tap back into it. A hat? You can lose a hat. But you can’t really lose your magic. So I love my magic, I’m proud of my hat. My current hat. I’m always looking for new hats.

Isaac: I actually just got a new hat. Obsidian visage.

ST: Have you ever lost something important to you?

Isaac: My family. That’s why I became a demon hunter in the first place.

Scadian: I never had a family. I was found as an orphan. My family died when I was about seven years old.

ST: How did they die?

Scadian: How did who die?

Scadian: I don’t have a family…I was found as an orphan.

ST: You don’t know how they died.

Scadian: No… I was found as an orphan. I never had one.

ST: So were you spawned out of nothing?

ST: What makes skeletons so cool?

Isaac: Skeletons… It’s just a dark… thing. I’m a demon hunter, so I’m kind of a dark guy. I don’t talk much. I once had a bow with a skull on it, and my enemies feared the weapon.

ST: How is your love life in the other realm?

Isaac: New Tristram is just total hell. There’s not much going on there, babe-wise. There’s nothing. I honestly contemplate death every night, but I just keep going.

ST: Scadian, when have you last known intimacy?

Scadian: Intimacy?… [long, thoughtful pause]… I have been intimate for many years now with my magic, you see.

Isaac: It’s something I have to witness every night. It’s horrid…[thousand yard stare]… A lot of incantations. A lot of moaning. A lot of groaning.

ST: How long have you two been together now?

Isaac: Oh, it’s been at least a couple of weeks now.

Scadian: We started, and we just can’t stop, you know?

ST: What are your preferred weapons?

Isaac: As a demon hunter, I primarily use crossbows and regular bows. Lately I’ve just been using a regular bow. And I have nice ruby in there, a flawless ruby, to get the damage up nice and high. But I also like to use emeralds, perfect emeralds in all my armor. It raises my speed.

ST: What drives you to… kill?

Isaac: Hatred. My powers are fueled by hatred but also discipline. I’m able to harness my hatred with the use of grenades, bow and arrow attacks, things that come down from the sky.

Isaac: He says that…

Perkins: Hey did you guys see that sick ass rainbow the other day?

Scadian: Yeah… we saw it… we’re actually getting interviewed right now, so…

ST: I think a lot of people in our realm might confuse you guys with the bad guys.

Isaac: We get that a lot…

Scadian: Yeah, well we look dark, but… every warrior has a dark side. We’re just fighting for the cause.

ST: What is your process? I’ve heard that you utilize fire as well as ice.

ST: Have you seriously considered the Obama administration’s request for your services in Israel?

Isaac: [deeply confused] I have never heard of this… Israel.

Scadian: As a wizard, I’m aware of almost all realms, and this realm that you speak of, Israel, [looking at Isaac] you fucking idiot, there’s a big war happening.

Scadian: I for one think we should go over there and end this conflict once and for all. Kill both sides.

Isaac: He’s told me about this other realm, Earth.

ST: When you get to Israel and Palestine, what are you going to do? What’s your first move?

Scadian: [seductive] Well you see, I like to take things a little slowly, have fun with it. I think what I’ll do first is go out, and let them start shooting me, make them think they’ll see me die for their god, but I say NO! For I am the God, and I will smite them and show them my power is greater than any god they could ever perceive.

Isaac: Yeah, and then once Scadian has eradicated all the vermin, then I’m going to loot all their corpses for their items and gems.

ST: Will you consider settling in the USA now that you’ve been honored with full amnesty into our realm?

Isaac: I wouldn’t say we would live here, but we would take over the whole planet, for sure.

Scadian: Without a doubt. I mean, it would almost be too easy. A final remark though, before we leave—I like to stir things up a little bit, you know? Stir up the pot. I have a grand twist for you. Obama is in fact the one summoning Diablo in this realm, so get ready for that guys. What we’re doing here is actually just causing the golden arcs of Heaven to break, and all Hell will break loose in your place too, so… we’ll be there when the time comes, but we’re going to wait for you to get hurt a little bit so it seems really great when we come to save the day. That’s our style. Scadian and Isaac here, signing out. [Scadian teleports back to Sanctuary]