No style or fashion, just knee-scraping fun in the woods. 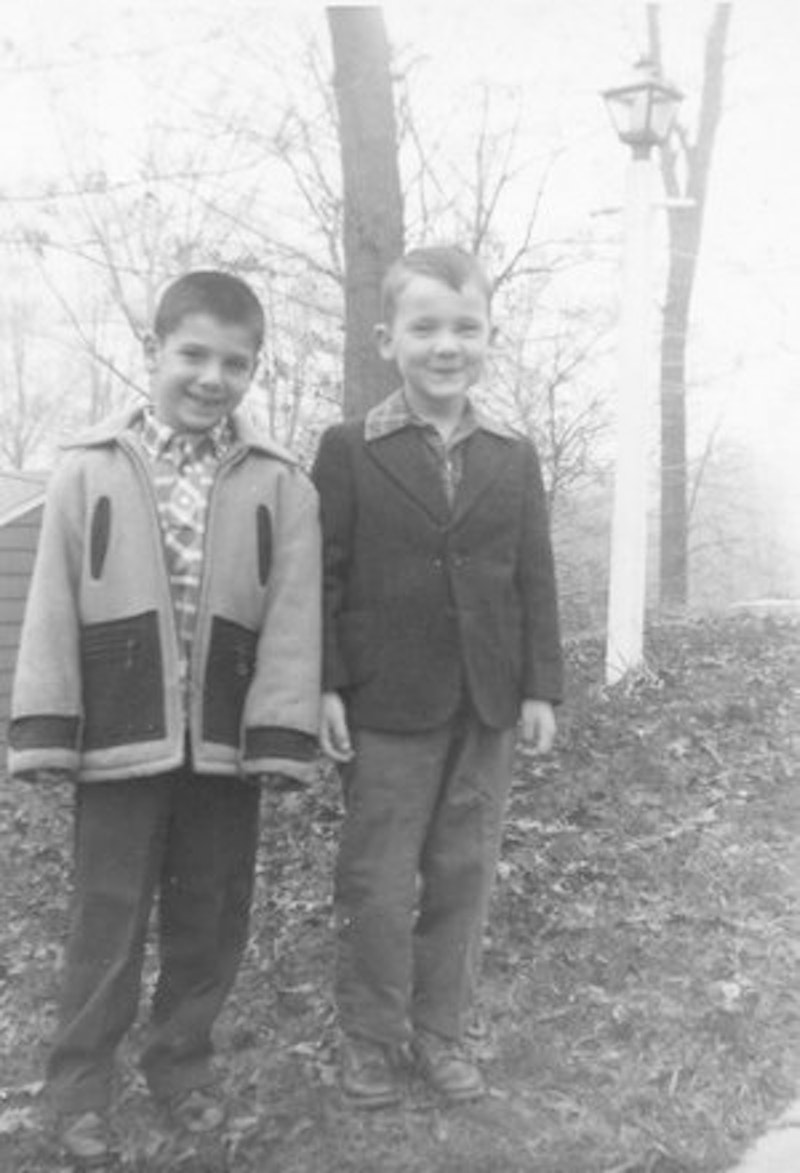 A Splice reader commented a few days ago about the photo that appeared in the weekly “What Year Is It?" feature, joking that the 1969 snap looked like Kansas in 1910 with its sepia tone and the dark skies above. Actually, it was from my hometown of Huntington, New York, my dad capturing his five sons in a fiercely competitive game of touch football at Mill Dam Park. But the crack had some merit: today, when you can’t escape the “selfies” (I retch just typing that word) and cell photos that swamp, and often foul, the Internet and TV, the once tired cliché “A picture’s worth a thousand words” doesn’t really ring true.

Kurt Andersen, in a Vanity Fair article a couple of years ago, made a cogent observation: the gist of it was that while technology has overwhelmed and transformed culture in the 21st century, a lot hasn’t changed radically from the 1980s, like fashion, film and music. I don’t think photos of kids today look much different than when my sons were toddlers in the 1990s: there’s still a lot of Hanna Andersson, t-shirts that bear the preferences of their parents, maybe Derek Jeter or ZZ Top, and tots with mohawks and maybe a wood or brown leather necklace with the ubiquitous 1960s peace symbol.

The picture above, taken on LaRue Dr. in the fall of 1961, shows two six-year-olds—with Dicky Howard to the left of this writer—dutifully posing near the sidewalk in front of one of the street’s 14 houses, before going off to hack around with neighborhood buddies. My lips are pursed, undoubtedly to escape Dicky’s extreme halitosis—he could be a needy stinker as a pre-teen, before maturing into a decent fellow who sadly met his maker at 30, killed in a Seattle car crash—and I’m sure we were both fidgety. Check out the duds: Dicky’s wearing a too-large winter jacket that’d probably fetch $100 in a vintage shop today, I’ve got on a sports coat that’s too small, our shoes look about 80 years old, and we both have casual “after-school” shirts on. Goes without saying that these are all hand-me-downs (as the youngest of five, I got the short end of the stick in that department), though neither of us, at that age, gave a toss about matched outfits, and neither did our parents.

It’s quite likely that we were headed off to “The Greens,” maybe two acres of untamed woods behind the houses at the top of the hill, meeting up with Kenny MacGuire, Skippy Kertzner, Bud Mulliken and a few others whose names I simply can’t recall. (Bud’s family was probably the fanciest on LaRue Dr., since his dad was an airline pilot, and in ’64 they moved to an affluent part of town, Lloyd Harbor, and regular-guy Bud turned into an arrogant private-school shit.)

I played in The Greens for thousands of hours as a kid, climbing huge trees and carving initials on them, swinging from vines like Tarzan, bringing home turtles I found, exploring the ruins of a cement bunker that we all fantasized was a German supply center from WWII, and racing down a dirt lane to another undeveloped patch of land, climbing over the tall steel fence that led us, eventually, to the Southdown Shopping Center. An alternate route to that haven—Jim’s Stationery Store for comics, nickel candy bars, Spaldeens and maybe a five-finger discount; a pizza joint; a deli and the supermarket, an IGA or Grand Union as I recall—was traipsing through the Wheeler’s yard to “The Fields,” a parcel of land that’d soon be developed for more houses but at that time was just mounds of dirt directly across from the dark and spooky Hansel and Gretel house of the Yeagers, an elderly German or Polish couple who got very pissed when an errant hardball landed in their rows of meticulously tended tomato plants. This area led to another very steep and rocky hill that you’d run down and put on the brakes before hitting the busy Southdown Rd. and proceeding from there.

It was in “The Fields” where, at eight, a bunch of us smoked our first cigarettes, quite a few for each, and amazingly none of us got sick. A purloined pack of Pall Malls that some kid brought. We’d also flash sparklers in the summer, set off firecrackers and cherry bombs (legal in New York back then, at least I think so), and flick matches with endless fascination. I do remember one time taking a magnifying glass and frying a colony of red ants, but felt sort of guilty afterwards, so that was a one-time activity. You’d hear, in school, about some older hoods who’d torture cats by lighting firecrackers in their mouths, but I never witnessed that and didn’t want to. Anyway, around six o’clock, you’d hear parents yell the names of all of us—the Howards rang a distinctive bell instead—and then it was home for dinner.