Hardly anyone in the bisexual community defines bisexuality as attraction to just men and women. 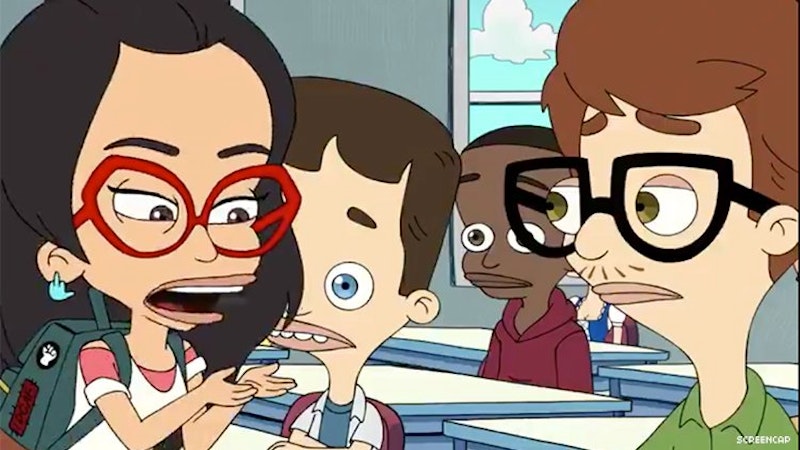 Ali is a new character on the Netflix cartoon Big Mouth who announces to the class in her introductory episode that she’s pansexual. “It’s like, some of you borings like tacos,” she explains, “and some of you like burritos. And if you’re bisexual, you like tacos and burritos. But I’m saying I like tacos and burritos, and I could be into a taco that was born a burrito, or a burrito that is transitioning into a taco, comprende? And honey, anything else on the fucking menu.”

Unfortunately, Big Mouth’s description of bisexuality misses the mark. Hardly anyone in the bisexual community defines bisexuality as attraction to just men and women, and to suggest that bisexuals can’t be attracted to trans people erases the countless number of trans people who are also bi. I can’t blame the creators of Big Mouth, though, because it’s a common mistake.

Even though “bi” means “two,” it doesn’t necessarily mean men and women only. According to bisexual vlogger Verity Ritchie: Heterosexual comes from the word hetros, which means “different.” Homosexual comes from the word homo, which means “the same.” So if you were to apply the word bi–which means “two”–if we apply this in the same way we apply hetro-and homosexuality, then we’ve got “different” and “the same.” So bisexuals are attracted to people who are different and people who are the same.

Ritchie goes on to explain that the term bisexual was first used to describe plants with both male and female characters. It wasn’t used to describe human sexual orientation until the late-19th century, according to Bi.org, and it meant having both heterosexual and homosexual tendencies. Also during that time gender was thought of as a strict binary of men and women only, and gender was determined solely by genitals, hence the reason why a binary term was used to describe people who were attracted to people of more than one gender.

Pansexuality, on the other hand, means being attracted to anyone regardless of gender. As Jazz Jennings explained it to Cosmo, “It’s more that I love someone for their soul.” Therefore, going back to Ali’s food analogy, bisexuals like tacos, burritos, chile relleno, quesadillas, and anything else on the menu; and love each dish for its unique flavor. Pansexuals like Mexican food in general, whatever the particular dish is.

At one time, I wasn’t sure whether to identify as either bisexual or pansexual. At first, I said I was bisexual, but then I was pansexual because I didn’t want to erase non-binary people. There was also a period of going back and forth between the two terms; I said I was bisexual to those unfamiliar with pansexuality, but called myself pansexual around people who were more up-to-date on the latest LGBTQ terminology. Ultimately I decided to call myself bisexual because it felt more comfortable.

No one can define sexual orientation for you. If you’re attracted to more than one gender and identify as bisexual, that’s great. If you identify as pansexual, that’s great, too. Or if you’re like Ariana Grande and prefer not to label your sexuality, that’s also valid. Just make sure you get your terminology correct first so you don’t accidentally define other people’s sexualities for them.