The Amazon series Undone draws a picture of reality. 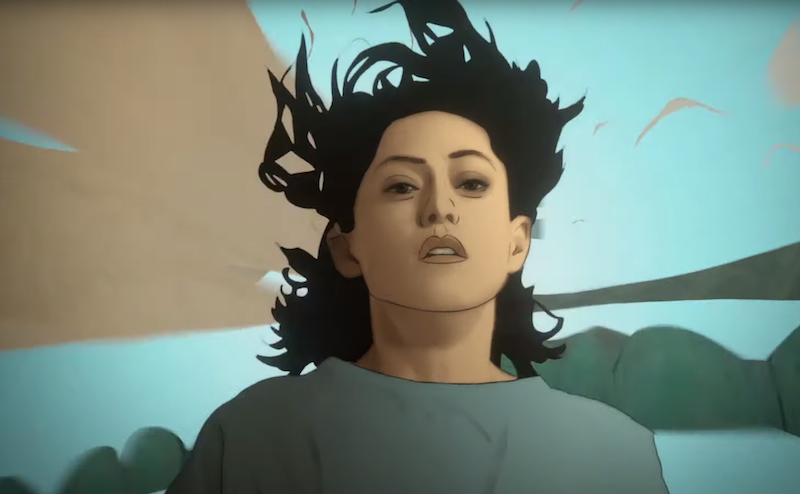 In his 1971 book The World Viewed, critic Stanley Cavell argues that film and photography are unlike other art forms in that they show the world itself rather than a representation of the world. "A painting is a world; a photograph is of the world. What happens in a photograph is that it comes to an end. A photograph is cropped, not necessarily by a paper cutter or by masking but by the camera itself."

When you look at a film or a photograph, you can always ask what is there beyond the frame; there's a reality cut off, not shown. A film is complete without the viewer; there’s more than the viewer can see, and so the viewer isn't necessary. Film, in Cavell's view, dissolves Descartes; it shows that things exist whatever may or may not be going on in your head. Film replaces, "I think therefore I am," with "Film exists, so it doesn't matter whether I think or not."

The new Amazon series Undone can be seen as a long exercise in making rude noises at Cavell's thesis. The eight-episode show (of which the first five episodes were available early to reviewers) follows the story of Alma (Rosa Salazar), a young woman dissatisfied with her humdrum everyday life. A sudden flashback image of her dead father Jacob (Bob Odenkirk) causes her to crash her car. When she wakes from a coma, her father’s still around, and he wants her to help him find his murderer.

It's important that Undone isn't filmed. It's animated through rotoscope, a technique where artists (and/or computers) draw over film images. It looks like film. When you see Alma choosing between two different cans of beans in the grocery store, you feel, as you do when watching a live-action movie, that there are other cans of beans beyond the frame, stretching out where you can't see them. But at the same time, everything you see is mediated; the beans are rendered for you through someone else's eyes and hand. Reality is always someone's perception of reality—a fact emphasized by Alma's hearing disability. She can tune in or out of conversations by disconnecting her hearing aid, and since we're viewing the world with her, when she stops hearing, in the show, so do we.

The fact that the world of Undone is insistently a representation of the world becomes increasingly important as the series goes on, and Alma's vision of reality drifts more and more out of sync with what might be called consensus perception. Seeing her dead father is only the beginning. She comes unstuck in time and space, walking from present conversations with her boyfriend to flashbacks of the time before her father's accident, or suddenly seeing terrifying images of one of the kids she watches in day care drowning.

Alma's dad provides some garbled New Age explanations for what’s happening to her. It's all caused by the shape of her brain, as a theoretical physicist he's uncovering the shape of time. These rationalizations are an irritating distraction from the more interesting insight, which is that Alma isn't that different from the viewer. Her supposedly weird brain functions just like our brains.

Our experience of reality isn't generally objective and focused; it doesn't unfold with the narrative and visual clarity of film. Instead, day-to-day, we live in our heads as much as in the world. Our experience of buying beans is layered with memories of buying earlier beans, or with memories of dead fathers, and worries about drowning. Since the series is animated, reality, memory, and fantasy for Alma all blur seamlessly into each other.

That may make Alma mentally ill, as a number of friends imply. But it's a common mental illness. We all live largely in our heads. We all constantly talk to people who aren't there, finishing arguments or thinking about what we wish we'd said as we walk down the grocery aisle or drive to work. Film, as Cavell says, shows us a world without us. But that world doesn't exist. The only world we have access to is the one we've animated.