With this bizarre and wonderful spinoff, Star Wars’ imaginary milieu no longer belongs exclusively to Lucasfilm. 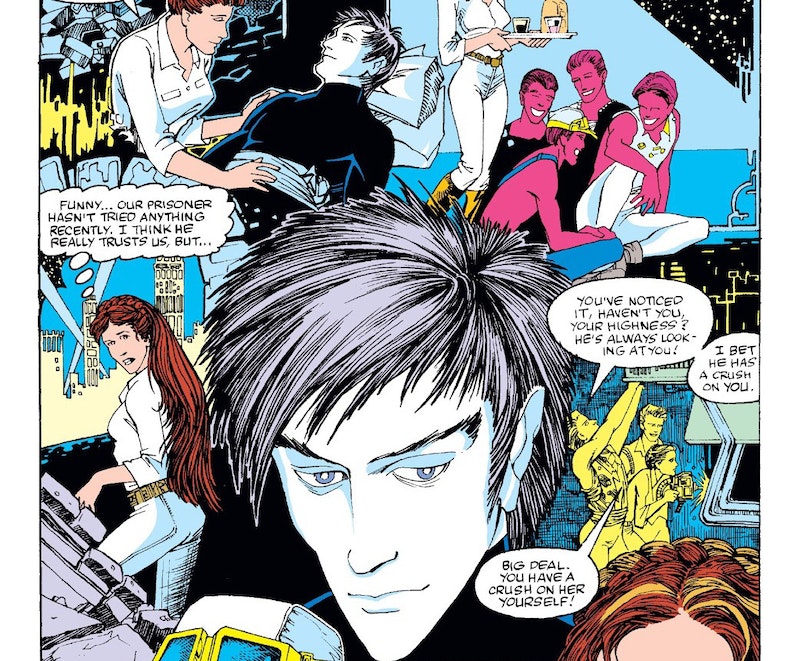 A new kind of emotional depth came to comic books in the 1980s. The colorful populism of the Silver Age and the overblown viscera of 1970s comics were replaced by elements of romantic drama, political symbolism, post-impressionist art, fashion illustration, and graceful fight choreography. Some of the major mainstream 80s creators included Steve Leialoha, June Brigman, Paul Smith, Louise Simonson, Steve Lightle, Colleen Doran, Roger Slifer, Mary Jo Duffy, and Cynthia Martin. Duffy’s professional career began when Marvel hired her as an editor in 1978. From there work as the main writer for Power Man and Iron Fist and a steady succession of fill-in script assignments led to her most well-known 80s position as writer for Star Wars. Twenty-plus issues after her series debut she teamed up with Martin, a young artist whose first major works were published as cover pieces for Star Wars 92 and 93. SW 94 contained Duffy’s satirical opus “Small Wars”; it was one of the earliest mass-produced comics to feature cover-to-cover illustration from Martin.

Controversial among comic fans and Star Wars purists alike, “Small Wars” has been mistakenly pegged as an effort to capitalize on the popularity of the Ewok Adventure TV movie (it premiered a few months before 94’s early-1985 cover date). Jo Duffy’s greatest strength as a writer is her knack for using humor as an element of characterization. In “Small Wars” the Ewoks are transformed into a subversive comedy act whose presence reinforces many of the political themes she established in the issues prior to this. Just like SW 89 and 93 this story focuses on synthetic conflicts engineered by an agent provocateur looking to exploit the post-Empire milieu’s instability.

In this case, it’s a representative of the Hiromi, a race of delusional aliens who look like humanoid cockroaches. The Hiromi army dispatches their bumbling Colonel Klink-ish emissary Hirog to Endor, home of the Ewoks and the site of a major Alliance Of Free Planets base. Hirog attempts to stir up unrest between an Ewok militia and a loose knit infantry of pink gremlin-ish Lahsbees. The plan’s implosion is a spectacular set up for slapstick pratfalls. Usual protagonists (Luke Skywalker, Princess Leia, Lando Calrissian, Han Solo, Dani, etc.) only get supporting roles. They also act as informal narrators for this comedy of errors, filling in the blanks left by their furry gibberish spouting pals. The haywire tone of Chaplin’s Great Dictator is echoed by the story’s clownish depictions of imperialist military strategy.

SW 95 has mild humorous touches, but from here on the series usually takes a dramatic approach to anti-war sentiment. Violence spills from the end of 95 into 96 in a stunning, pastel-drenched desert duel. It’s an agile dance of destruction that pushes two main characters to death’s edge. Luke Skywalker and his light sabre are pit against Darth Vader acolyte Lumiya, a disfigured cyborg who wields a serpentine light whip. 95 introduces Lumiya’s closest ally, Nagai leader Den Siva. The Nagai are yet another post-Empire military force roving around the galaxy trying to pick up from where Vader and co. left off.  This ultra-militant manga-esque alien race are vampiric punks who live for torture, spandex, and gravity defying hair styles. From SW 95 to 107 they were the series’ main antagonists.

“Tai” (Star Wars 103) presents a sympathetic explanation for the roots of the Nagai’s intense malevolence. Predators, serial killers, conquerors, and mass murderers are often survivors of severe physical and emotional assault. The story highlights the vulnerability of individuals who’ve lived through the assaults of war, oppression, and injustice. It’s a melodrama incomparable to any other Star Wars issue, or any other comic from the ultra-dramatic 80’s. For Cynthia Martin, “Tai” was her most personal work of the series. The artist endured emotional and physical abuse and was abandoned by her parents at age 15, a tragedy that inspired her life-long commitment to art.

Along with “Small Wars,” the other most unfairly slagged Duffy/Martin story is “All Together Now” from SW 107, the series’ finale. Detractors view it as a haphazard attempt to tie up loose ends at once using dense expository dialogue and little action. Viewed outside of a Lucasfilm context and through the prism of 1980s comic aesthetics, “All Together Now” is the only fitting conclusion for the Duffy/Martin plot threads. Protagonists and antagonists suddenly unite against a surprising common foe. Thought-provoking debates between main characters work as crucial storytelling aids. These heated yet civil exchanges show how people who started out as enemies became dedicated to putting aside their differences. Just as “Tai” used offbeat drama to explore the roots of violence and villainy, “All Together Now” forms an abstract but uplifting climax that explores a genesis of heroism and solidarity.

Regardless of how many lawyers, contracts, and copyright documents indicate otherwise, Star Wars’ imaginary milieu no longer belongs exclusively to Lucasfilm. For more than 40 years the films’ characters, narratives, and their universal themes of family drama and sacrifice have been internalized by millions of viewers. Every fan reads their own special subtext into these epics. Duffy and Martin were part of the Star Wars cult and never let their devotion to the franchise alter their styles of storytelling and illustration. The final issues of Marvel’s Star Wars turned George Lucas’ fantasy into a coping mechanism used to reconcile difficult elements of reality. In the hands of Duffy and Martin, it was no longer a simple battle between good and evil. The rivalry between The Rebels and The Empire became a malleable framework for stories that celebrated empathy, anti-imperialism, and inter-sectionalism.